Garbage filled footpaths and spilled into gutters along one of Melbourne’s busiest streets during the week as Moreland City Council workers refused to empty street bins as part of their industrial action over a “rubbish” pay offer.

Some residents, concerned about rubbish flowing into the nearby Merri Creek after Friday’s heavy rains, took to picking up rubbish themselves. 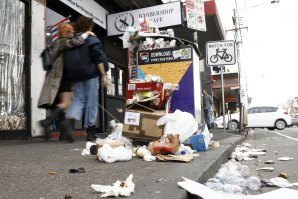 Moreland Council sent non-union contractors to empty bins on Sydney Road on Saturday, a day after The Sunday Age sent a series of questions to the council about the emerging rubbish crisis.

Staff are taking protected industrial action after a long-running dispute with management over a new enterprise bargaining agreement. During negotiations, Moreland offered staff a below-inflation pay rise of 1.5 per cent for the current financial year, rising to 2 per cent or the rate cap (whichever is higher) for the following two years.

The Australian Services Union has labelled the offer, which is a fraction of the current headline inflation rate of 5.1 per cent, “rubbish” and an effective pay cut for workers.

“The cost of living has risen sharply in the last year, and workers who continued to provide essential services through the worst of the pandemic should not have to struggle even more to make ends meet,” union secretary Lisa Darmanin said. 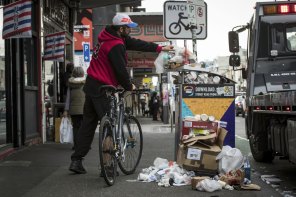 Residents were resorting to piling rubbish upon rubbish at the busy Sydney Road shopping strip.Credit:Darrian Traynor

“Everyone in Moreland can see just how important the work of council workers is now that ASU members are taking industrial action.

“Moreland councillors, many of whom were elected on progressive and worker-friendly platforms, must be shocked at the way workers at the council are currently being treated.”

She said staff had also raised concerns about a “toxic” workplace culture at Moreland, and had unsuccessfully sought paid pandemic leave.

The union has not ruled out escalating its protected industrial action. Its members are currently refusing to empty street rubbish bins, including on busy Sydney Road, making PA announcements in libraries about the enterprise bargaining agreement campaign and refusing to pick up rubbish.

Mayor Mark Riley declined to comment on the situation, saying it was a matter for the chief executive, Cathy Henderson.

In a statement, Henderson said it was “unfortunate that [union members] have chosen to take industrial action”.

“While we acknowledge the legal right of staff to take protected industrial action under Commonwealth law, it is regrettable and unfortunate that this has impacted the collection of waste from public bins along Sydney Road,” she said.

“We are working to urgently resolve the issue with collection of waste from public bins along Sydney Road, and expect this rubbish to be cleared in coming days.”

Adding to the mess is a weeks-long delay in contractor WM Waste Management collecting hard rubbish in parts of the municipality.

Henderson said the contractor had been hit with COVID-related staff shortages, delaying the start of collection, but blamed residents for putting out more hard rubbish than in previous years.

“Like some other councils, our hard rubbish collection schedule was originally delayed due to staff shortages through our hard waste contractor caused by COVID-19. Crews are still working at 60 to 70 per cent of normal capacity.

“Despite crews doing everything they can to make up lost time, including adding extra workers and weekend shifts, we are unfortunately seeing much larger volumes of rubbish on our streets than usual.”