Construction is set to begin on a 410-metre rock wall at a picturesque beach in Victoria’s south-west, sparking a fierce backlash from opponents who fear it will permanently damage the stretch of coast.

Glenelg Shire is pushing ahead with plans to build the wall at Bridgewater Bay on Monday, arguing the foreshore is vulnerable to flooding and coastal erosion. However, it acknowledges the foreshore is not currently eroding significantly. 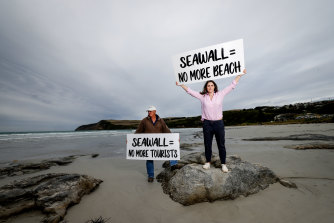 Some residents have mounted a last-minute bid to halt the project, instructing lawyers to file an injunction unless the council agrees to postpone building the wall.

A master plan was developed in 2014 to protect the beach but locals say they only learned of plans to build the $4.2 million structure in recent months.

Across the Victorian coastline communities are grappling with management of coastal erosion with rising sea levels and the elements eating away at many beaches.

Bridgewater Bay, near Portland, is lauded for its natural beauty and is popular with summer holiday makers.

But resident Jo Austin, whose businesses include seal tours and a school camp, disputed suggestions erosion posed a major problem at Bridgewater Bay.

“In the past 25 years there’s been minimal erosion,” he said.

Mr Austin said he feared a prominent rock wall would detract from the beach’s natural charm and a rigid structure may result in waves washing sand away.

He said other sea walls nearby had failed to stop the march of erosion and left an ugly scar on the coastline.

“Who will ever want to come here if there’s no beach?” 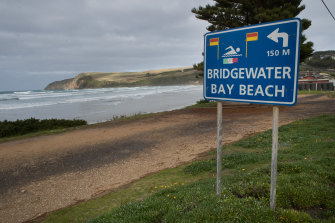 More than 50 people attended a community meeting about the sea wall on Sunday and opponents of the project have organised a rally for Wednesday afternoon.

But Glenelg Shire councillor Scott Martin, who runs the Bridgewater Bay Cafe on the beach, said erosion had caused the loss of up to 10 metres in sand over the 12 years he has owned the business.

Cr Martin said he had withdrawn from council discussions about the project to avoid a conflict of interest. But speaking as a business owner, he said his cafe and the beach were vulnerable to the elements.

On the weekend massive waves and powerful winds battered beaches along Victoria’s coastline at high tide.

Cr Martin said water had reached the cafe on the weekend, moving heavy outdoor furniture and leaving rocks and sand on the doorstep.

He said urgent action was needed. “For us as a cafe it’s do or die,” he said.

A council spokeswoman said rock walls were commonly built in Australia as a barrier to shoreline erosion. 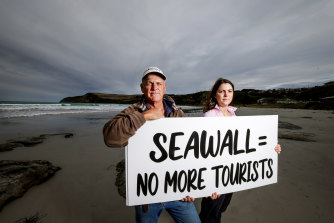 “Currently, the beach is in a building phase and is not eroding significantly,” she said. “However, the volume of sand on the beach naturally fluctuates, and the beach can erode when this natural sand availability is reduced.”

She said an existing rock wall in the dune face was eroding and rocks had fallen onto the beach.

A solicitor for Cape Bridgewater resident and lawyer Doug Cahill sent a letter to the council warning it to pause the project or face an injunction in the Victorian Civil and Administrative Tribunal or action in the Supreme Court.

The letter by lawyer Peter Cahill, who is related to Doug Cahill, requested the council undertake further community consultation and address engineering concerns about the wall.

It says the council had advised that a “soft-engineering finish” could not be achieved.

“As a result, my clients are gravely concerned that the project is likely to cause irreparable damage to the natural beauty of Cape Bridgewater Beach,” it said.