The process of appointing federal judges would be made less secretive and the government would be forced to publish annual statistics on the diversity of the judiciary, including gender and ethnicity, under proposals being considered by Australia’s top law reform agency.

The Australian Law Reform Commission (ALRC) was asked last September to conduct a review into judicial impartiality, including whether existing legal mechanisms for raising allegations of bias against a judge were “sufficient and appropriate”. 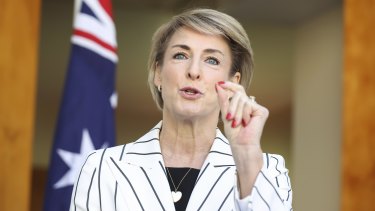 Attorney-General Michaelia Cash will be handed the ALRC’s final report in September.Credit:Alex Ellinghausen

In a consultation paper released on Friday, the ALRC raised 25 questions and proposals for further discussion.

It is expected to conduct a second round of consultation in June and July before handing a final report to Attorney-General Michaelia Cash by September 30.

Among the proposals offered for further consultation is a requirement the federal government “commit to a more transparent process for appointing federal judicial officers that involves a call for expressions of interest” and the publication of selection criteria.

The process, which would also apply to the Administrative Appeals Tribunal, should aim explicitly “for a suitably qualified pool of candidates who reflect the diversity of the community”, the proposal says.

At present, federal judicial appointments, including appointments to the Federal Court and AAT, are made by the Attorney-General with no formal advisory process.

The report also raises for consideration whether the Attorney-General should “report annually statistics on the diversity of the federal judiciary, including, as a minimum, data on ethnicity, gender, age, and professional background”.

Former Labor attorney-general Robert McClelland, now a judge, introduced a process for federal judicial vacancies to be advertised and candidates assessed by an independent advisory panel but the system was scrapped by the Coalition after it won the 2013 federal election. The system did not apply to the AAT.

Shadow attorney-general Mark Dreyfus said: “We need a return to more transparent process for federal judicial appointments, based on merit.

“Since 2013, the Liberals have been handing out taxpayer-funded positions on various Commonwealth bodies to Liberal Party mates without any accountability.”

Mr Dreyfus said more than 70 Liberal Party-linked appointments had been made to the AAT “and more recently [the government] appointed controversial former Liberal Party MP Sophie Mirabella to a plum job on the Fair Work Commission”.

“The ALRC envisions that the current practice of first raising the issue informally before the judge … would be retained,” the paper says.