Washington: The US Department of Homeland Security (DHS) on Wednesday (Thursday AEST) defended its decision to withhold circulation of an intelligence report warning that Russia was trying to portray Democratic presidential candidate Joe Biden as mentally unstable.

A draft of the report, headlined "Russia Likely to Denigrate Health of US Candidates to Influence 2020 Election", was submitted to the agency's legislative and public affairs office on July 7, according to ABC News, which first reported the matter. 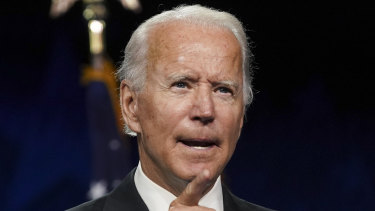 DHS spokesman Alexei Woltornist said the agency held up the memo because it lacked necessary context and evidence. Career DHS officials decided to delay the report's dissemination after acting DHS Secretary Chad Wolf asked questions about it, he said.

The draft bulletin reported that Russian state media RT, Sputnik and a Russian proxy website between September 2019 and May 2020 posted allegations about "the poor mental health of 2020 presidential candidate Joe Biden."

The draft bulletin cited the proxy website as saying his verbal miscues were symptoms of dementia and not a stutter as reported in US media. Biden, 77, has acknowledged he has been affected by a stutter since childhood.

The bulletin also said that Iranian and Chinese media had published materials questioning the mental health of Republican President Donald Trump, who is 74.

The assertions that Russia, China and Iran planned to interfere in the US elections in November paralleled broad findings made public in late July by US counterintelligence chief William Evanina, which did not mention Russian claims about Biden's health.