Record 1,450 migrants crossed the Channel in dinghies last month, taking total so far this year to more than 5,000

A record number of migrants reached Britain by illegally crossing the Channel last month, it has been confirmed.

The massive rise comes despite a vow from Home Secretary Priti Patel last autumn to have made the crossings an ‘infrequent phenomenon’ by this point.

The Home Office has sought to blame French authorities and ‘activist lawyers’ for the increase and for difficulties removing asylum seekers once they arrive in Britain. 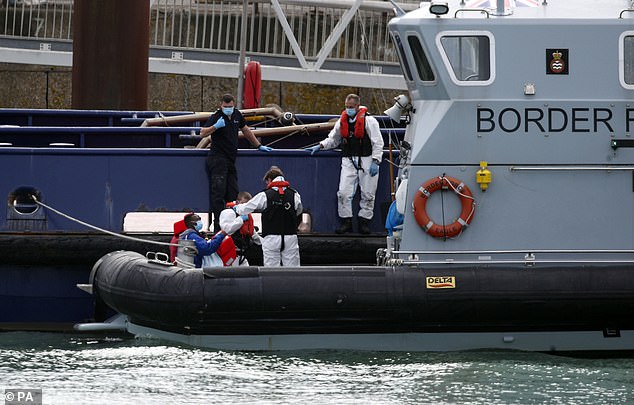 A group of people thought to be migrants are brought into Dover, Kent, by Border Force officers following a small boat incident in the Channel

About 100 migrants were seen arriving in the port of Dover yesterday, with at least 15 small boats reaching British shores.

The daily total included women and children, as well as three men on an inflatable kayak.

One woman in her 20s was seen being brought ashore by Border Force officers in a wheelchair.

Others were brought into Dover aboard the UK Border Force patrol boat Hunter.

They were seen being ushered out of the cabin on to the stern of the vessel where they were given life jackets.

Immigration officials then helped them ashore one by one and escorted them up the gangway. 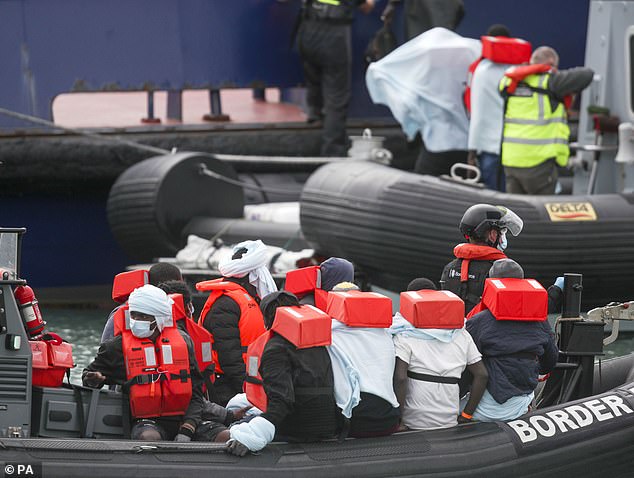 A dinghy believed to have been used to cross the Channel was seen being towed into the harbour shortly afterwards.

Later, more arrivals believed to be migrants were seen coming into the port, sitting on the front of an RNLI lifeboat.

About a dozen in life jackets were helped ashore, where they were met by border officials.

The previous monthly record for migrant arrivals was 1,075, set in July. August’s arrivals saw 235 reach Britain on just one day – which was also a record.

Miss Patel is seeking a deal with French authorities that would allow migrant boats to be turned back in the Channel. No agreement has yet been reached.

Yesterday, the Mail revealed the taxpayer was hit with a £1billion bill for the asylum system last year.