A solemn spectacle… and Her Majesty’s final resting place: How this historic day of mourning will unfold with the Queen’s coffin being taken to Westminster Abbey at 10.44am, and until she is laid to rest with her beloved Philip at 7.30pm

The funeral of Queen Elizabeth II will take place at Westminster Abbey today before Her Majesty is laid to rest alongside her husband, Prince Philip, at St George’s Chapel in Windsor.

London is expected to be at full capacity as hundreds of thousands of mourners are expected to watch the processions throughout the day.

Hundreds of foreign dignitaries who attended a reception at Buckingham Palace hosted by King Charles last night will also be in attendance, including US President Joe Biden.

The Queen’s coffin, which has been walked past by thousands of mourners over the last week, will first be carried in a procession to Westminster Abbey from 10.35am before the State Funeral begins at 11am.

A bearer party formed of soldiers from The Queen’s Company, 1st Battalion Grenadier Guards will lift the coffin from the catafalque in Westminster Hall, carrying it to the North Door.

The Queen has been lying in state at Westminster Hall with both her children and grandchildren mounting separate vigils on Friday and Saturday respectively.

The coffin will then be transported by the State Gun Carriage which has been in the care of the Royal Navy since 1901, when it was removed from active service for the funeral of Queen Victoria. 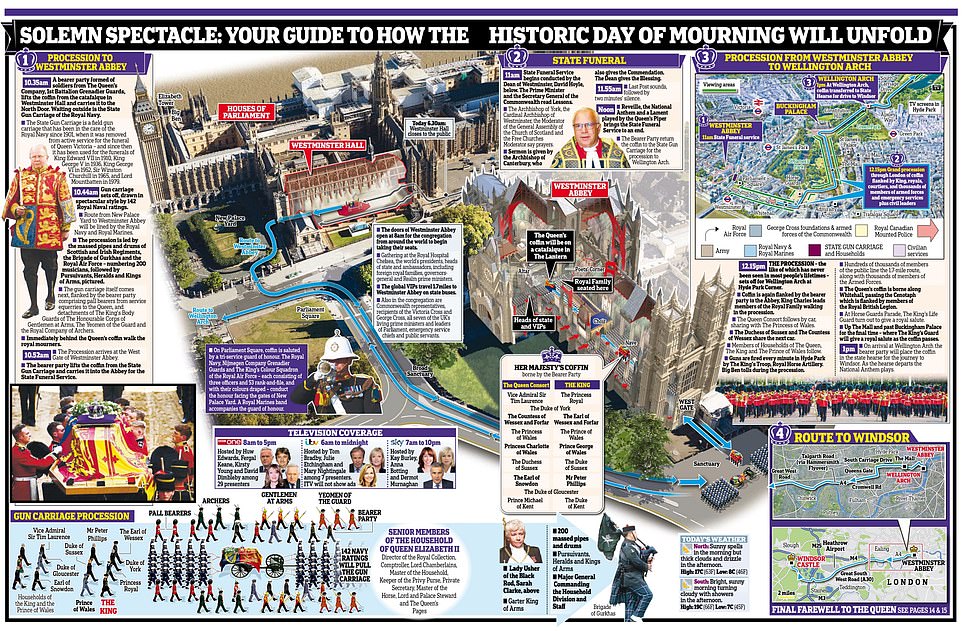 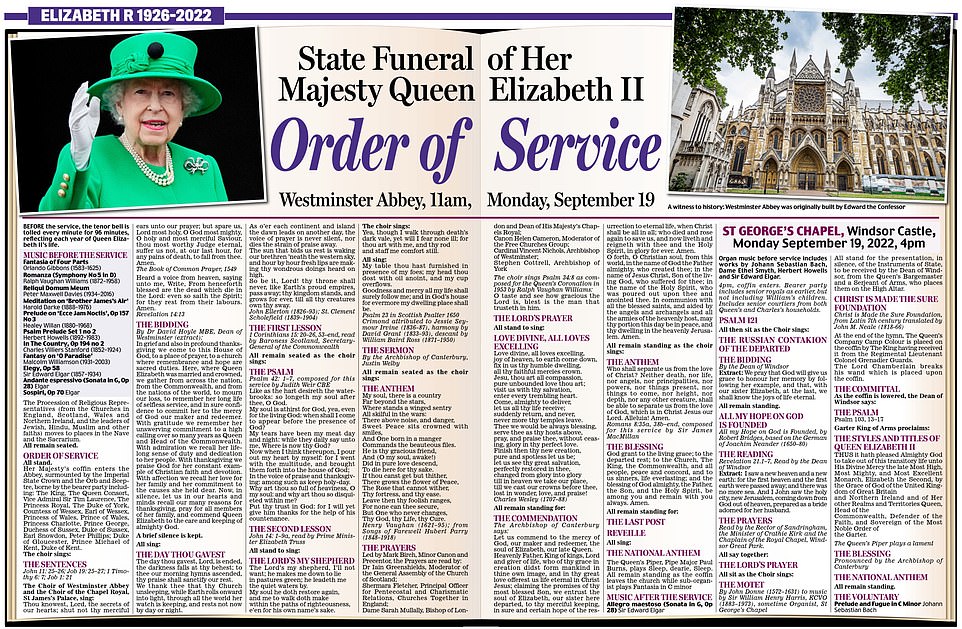 The Order of Service, which includes readings, sermons, hymns and the National Anthem, has been released before the funeral

The gun carriage will set off at 10.44am, drawn in spectacular style by 142 Royal Navy ratings. Each part of the day has been timed to perfection in what could be the biggest international event in decades.

As the coffin is taken from New Palace Yard to Westminster Abbey, a procession will be led by the massed pipes and drums of Scottish and Irish Regiments, the Brigade of Gurkhas and the RAF.

The royal mourners will walk immediately behind the Queen’s coffin. This includes the King and his siblings, the Duke of York, the Princess Royal and the Earl of Wessex.

Behind them will be three of the Queen’s grandchildren – the Prince of Wales, the Duke of Sussex and Peter Phillips.

Finally Princess Anne’s husband Vice Admiral Sir Tim Laurence, the Duke of Gloucester and the Earl of Swindon will follow on.

The procession is due to arrive at the West Gate of Westminster Abbey at 10:52am, shortly before the funeral begins. 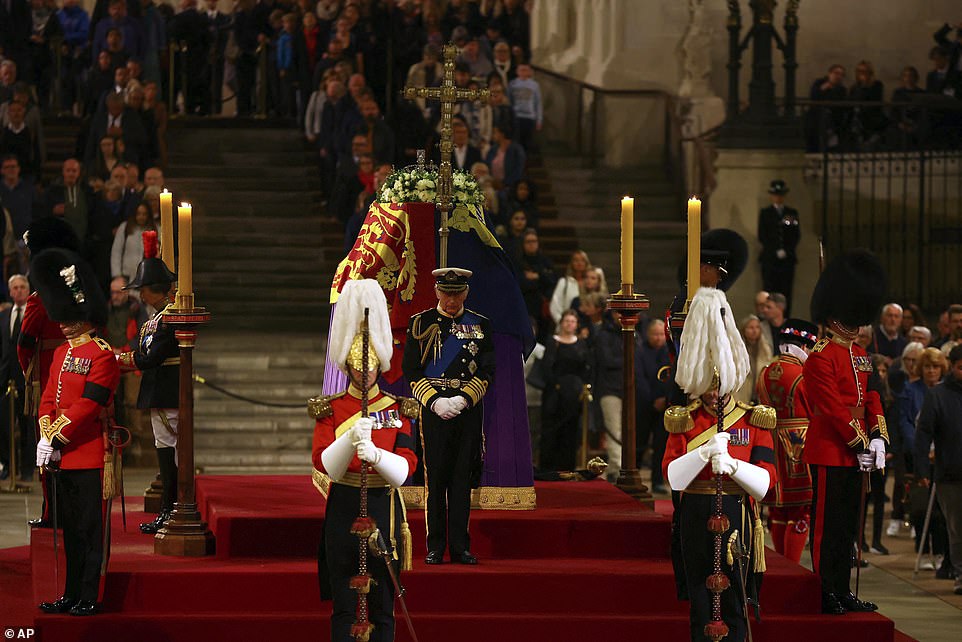 King Charles and his three siblings, Princess Anne, Prince Andrew and Prince Edward mounted a vigil for their mother, the Queen on Friday evening

The funeral itself, starting at 11am, will be conducted by the Dean of Westminster, David Hoyle. There will be a collection of readings, prayers and hymns as well as a sermon by the Archbishop of Canterbury who also gives the Commendation.

At 11.55am the Last Post will sound before a two minutes’ silence. This will be followed by Reveille, the National Anthem at 12pm and a Lament played by the Queen’s piper which will signal the end of the State funeral.

The bearer party, headed by the King and Queen Consort, will return the coffin to the gun carriage for its procession to Wellington Arch.

The Princess Royal and her husband will be behind the King and Queen Consort. Behind them will be the Duke of York followed by the Wessexes. 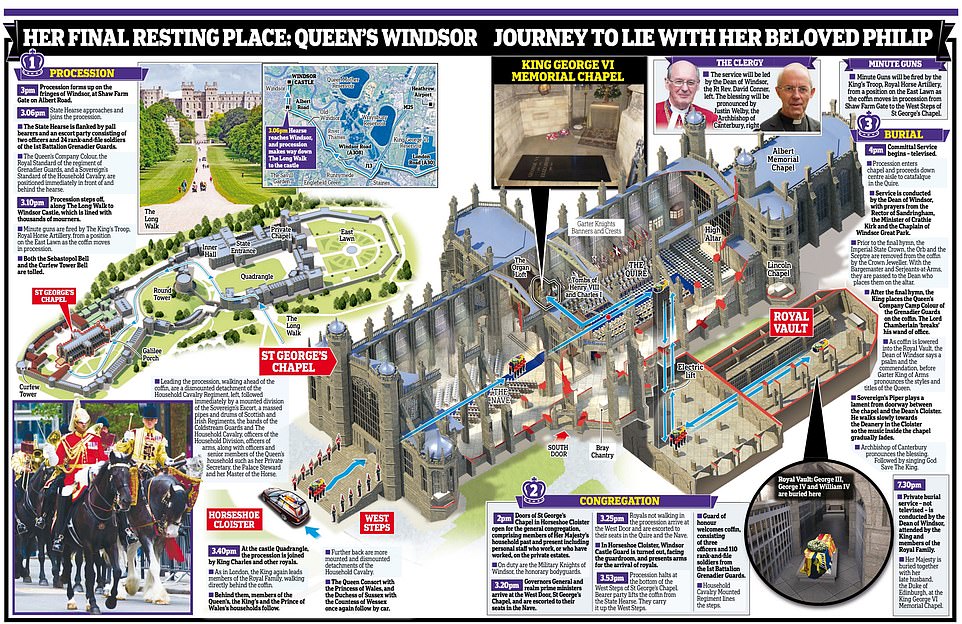 The Queen will be taken to Windsor following the funeral at Westminster Abbey, where she will be buried alongside her husband Prince Philip 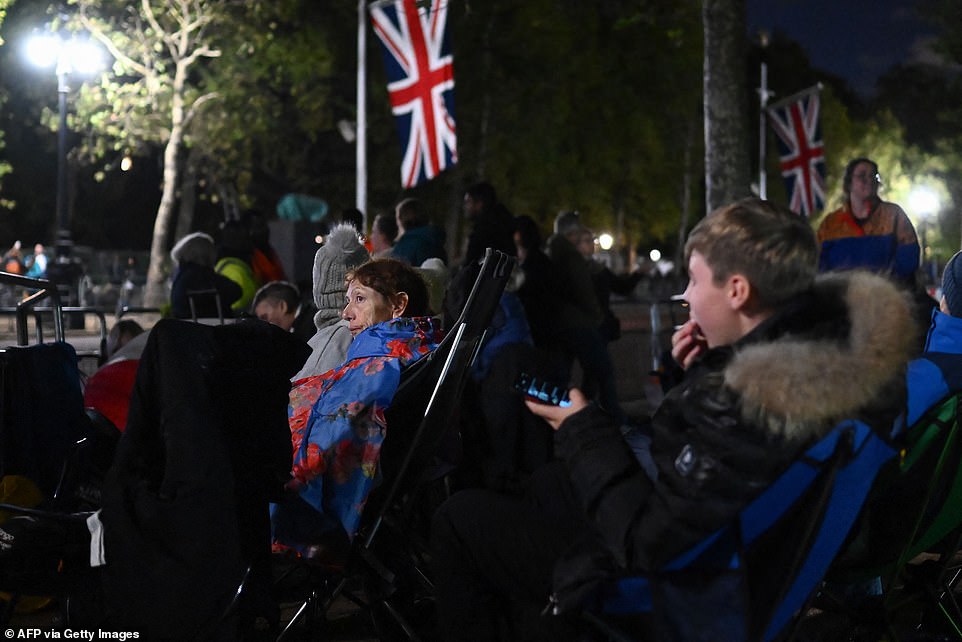 The Prince and Princess of Wales will be behind them and in a last-minute announcement, their children Prince George and Princess Charlotte attend their great-grandmother’s funeral and join the Bearer Party.

They will be in front of Prince Harry and Meghan Markle, the Earl of Swindon and Peter Phillips. Finally, the Duke of Gloucester, Prince Michael of Kent and the Duke of Kent will be at the back of the coffin.

The procession, which many will never have seen anything like before, will begin at 12.15pm, where the coffin will be followed by King Charles and the Royal family.

The Queen Consort, with the Princess of Wales and the Duchess of Sussex with the Countess of Wessex will follow behind in a car.

Guns will be fired every minute in Hyde Park and Big Ben will toll during the procession despite the clock tower being under urgent investigation after it failed to chime during the nation’s minute of silence last night.

Hundreds of thousands of mourners are expected to line the 1.7 mile route which goes past The Mall and Buckingham Palace before reaching Wellington Arch at 1pm.

Here, the coffin will be transferred to State Hearse as it is driven to Windsor to the sound of the National Anthem on departure.

The Queen Consort and Kate, along with the Duchess of Sussex and Countess of Wessex will rive behind the coffin in London and Windsor 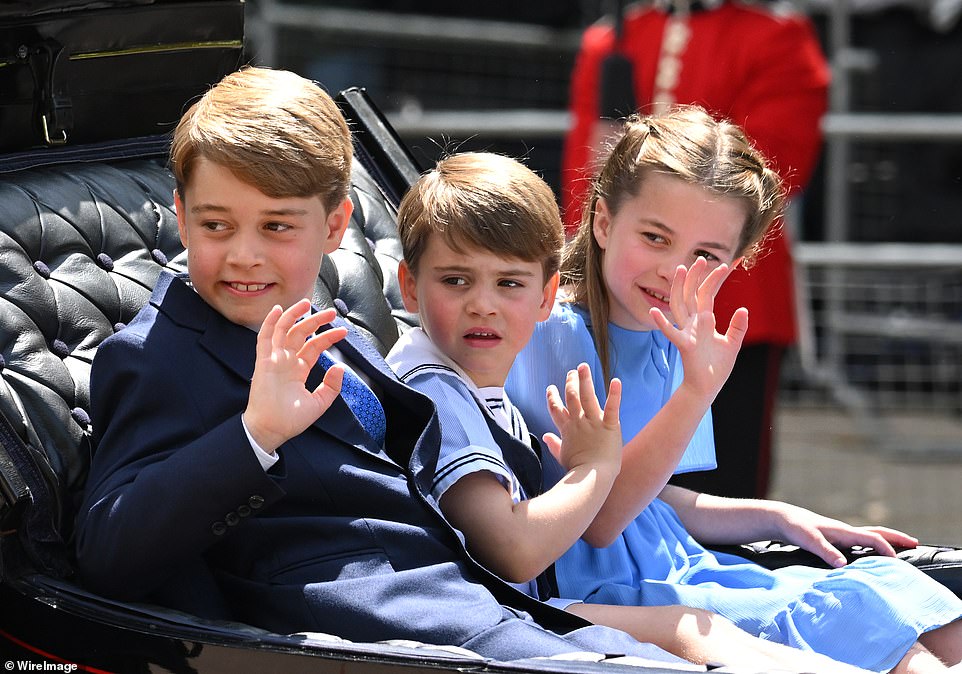 TV coverage of the funeral will be on BBC, ITV and Sky all day and members of the public can view it on screens in Hyde Park.

At 3.06pm, the State Hearse will join the procession in Windsor as it goes past thousands of mourners lining up The Long Walk to Windsor Castle.

Mourners have already been seen carrying luggage as they look to secure an early spot along the procession route and camp out.

King Charles and the other royals are expected to walk directly behind the coffin at around 3.40pm before the procession halts at the bottom of the West Steps of St George’s Chapel at 3.53pm.

The Queen Consort, with the Princess of Wales and the Duchess of Sussex with the Countess of Wessex will once again follow by car.

The Bearer Party will lift the coffin from the State Hearse, carrying it up the West Steps where it will be welcomed by a guard of honour.

At 4pm, a televised Committal Service will begin, conducted by the Dean of Windsor. The procession will enter the chap and proceed down the centre aisle to the catafalque in the Quire.

Prior to the final hymn the Imperial State Crown, the Orb and the Sceptre will be removed from the coffin by the Crown Jeweller.

The coffin will be lowered into the Royal Vault as the Dean of Windsor says a final psalm and commendation before the Archbishop of Canterbury gives a final blessing followed by the singing of God Save The King.

There will be a private burial at 7.30pm for the King and members of the Royal Family which will not be televised. Her Majesty will be buried together with her husband Prince Philip at the King George VI Memorial chapel.