Breakfast was barely done and Fox News was telling its viewers to break out the parmesan popcorn – pronounced parmah-jahn, with a twangy American affectation. If there is one thing more exhausting than four years of constant presidential noise, it is surely the television coverage on election day as the competitors hit the home straight.

Understanding how Americans report and watch their elections is not so different to understanding Americans themselves. Their culture is jingoistic, so it follows television coverage of their presidential elections is the same, but on steroids. 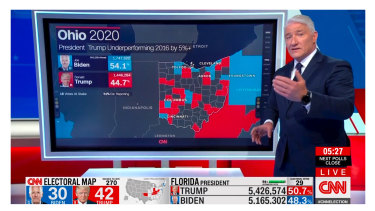 Think of the scene in Back To The Future where a ribbon-draped car is driving around Hill Valley in 1955 with a bullhorn on its roof, squawking: "If you believe in progress, re-elect Mayor Red Thomas!" Modern-day America isn't so far from Hill Valley in 1955 and its elections still come with quaint touches like bunting, streamers and brass bands.

Like much in America's televisiocracy, the coverage is wall-to-wall, so when you spin the dial it can quickly begin to feel like you have an inescapable party guest in the room: everywhere, mouth full and no idea when to call it a night. It is all energy and pep. If they could get away with it, and to some extent Fox News tries to, they would have actual cheerleaders in the studio.

You're also swimming in choice: CBS, NBC, ABC, CNN and others cranking out election content on their channels, websites and network-owned radio stations. There is the national broadcaster, PBS, and the hard right, Fox News, America's Voice, One America and others. There are Spanish-language networks, Telemundo and Univision, and digital upstarts like Newsy and Cheddar.

What they all offer, without interruption, is a chorus of talking heads, from Oprah's bestie Gayle King and Face the Nation host Margaret Brennan (on CBS), Bret Baier (on Fox News), Anderson Cooper, Chris Cuomo and Christiane Amanpour (on CNN), Lester Holt (NBC), Rachel Maddow (CNBC) and many, many others. 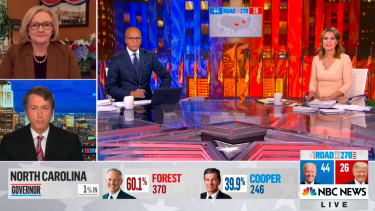 Lester Holt and Savannah Guthrie on NBC’s election night coverage in the US.

Beside them, a human noise machine is interpreting everything from party politics in Soda Springs, Idaho, to the mystical nonsense of the "Electoral College". We call them "pundits", professional television talk panel mouthpieces. And as party loyalties have infected the networks, the pundits have been joined by "proxies", who are people replaying the party line like a Pull-n-Speak Barbie.

So here's the thing: Americans love elections. Like us, they elect government representatives and city mayors. But they also elect sheriffs, state governors and treasurers. They elect land and tax commissioners and school trustees. And in Florida they elect the county mosquito control boards. They even have "primaries", that is, pre-elections to work out who is running for election.

Remember Kim Davis, the county clerk who refused to issue marriage licenses to same-sex couples? Like most county clerks, she was elected (historical footnote: she is no longer elected). In total, there are more than half a million elected officials in the USA. Tired of elections yet?

As for the coverage on TV, it's like a medicine cabinet full of pills. You might reach for one over the other, but in the end you can only take so many before you overdose. And the script remains the same: Fox News with shrill interrogation-free sermons from party proxies, CNN turning everything into a 3D graphic and BBC News taking the global view, occasionally breaking for – gasp – non-election news headlines. Remember them? 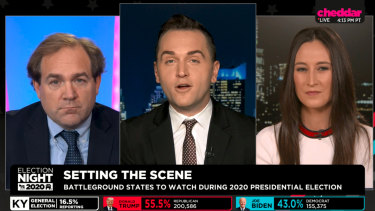 They are also scouring the 3D map for electoral tensions, where blue is inching ahead of red, or red is inching ahead of blue. All eyes inevitably turn to Florida, where a photo finish sets the tone for the night. "This is why elections are fun and this is why Florida is, of all the states in the United States, one of the, if not the, ultimate battleground state," declares CNN's John King.

And, inevitably, like the weather, things begin to change. Morning positivity on Fox News and caution on CNN shifts later in the day, as voting trends make themselves clearer and, for the deeply partisan, anxieties and trout pouts start to appear as each new block of data throws an all-but-given victory back into the realm of uncertainty.

Salvation comes, as it always does, in the form of intellectual heft. CNN's Christiane Amanpour and Anderson Cooper. NBC's Savannah Guthrie and Lester Holt. To America's discredit, there aren't many of them left. But when there is no shortage of hot air, genuine insight walks into the room like an open window in the aftermath of a silent fart.

And for the headline hungry, a tight race means the lack of a clear margin. The most popular phrase on every channel? "Too early to call." Which means the last word belongs to former senator Claire McCaskill who, speaking on NBC, offered this pearl of wisdom: "It's gonna be a long night." Yep. And an even longer four years until we do it all over again.