In TENT on staying open! Landlords and restaurateurs set up marquees, shelters and TEEPEES in ingenious trick to side-step Covid rules and keep customers cosy while seated outside

With many parts of Britain now under local lockdowns preventing friends from different households meeting indoors, pubs across the country are having to come up with ingenious methods to get people to visit.

And these photographs show how venues are turning to marquees and teepees with heaters to follow Covid-19 rules and ensure those living in tier two areas such as London can still meet ‘outside’ in groups of up to six.

Pubs in tier two under ‘high’ alert are not allowed to seat anyone from different households indoors, so they are turning to marquees which can be classed as outdoor seating as long as the ends are opened up.

The Government has urged pub landlords and restaurateurs to ensure social distancing is maintained within marquees, and that they are open on three or four sides to be considered as an ‘external environment’.

Emma McClarkin, chief executive of the British Beer and Pub Association, told MailOnline today: ‘Many pubs have invested in their outdoor spaces to make them comfortable and welcoming for winter so do check out your local.’

And UK Hospitality chief executive Kate Nicholls added: ‘The restrictions, particularly for those businesses in tier two areas, means that they will have to think laterally in order to accommodate guests.

‘A marquee is a great idea, provided the pub has the space. Utilising outdoor areas will be vital if pubs and bars are going to trade at anything approaching a healthy level. Some local authorities have relaxed rules to let businesses utilise outdoor space and we hope more will follow that lead.’

Among the pubs in England which have turned to outdoor marques and teepees are The Weeping Willow in Barrow, Suffolk; The Three Tuns in Guilden Morden, Cambridgeshire; and The Perch in Binsey, Oxfordshire. 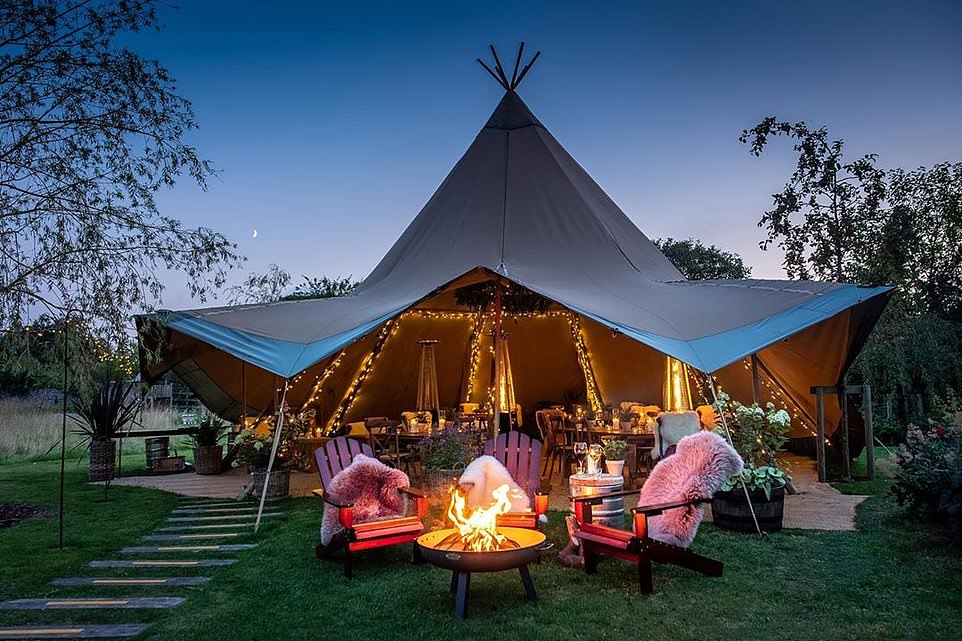 The 17th century Weeping Willow in Barrow, Suffolk, is among the pubs in England which has a covered outdoor seating area 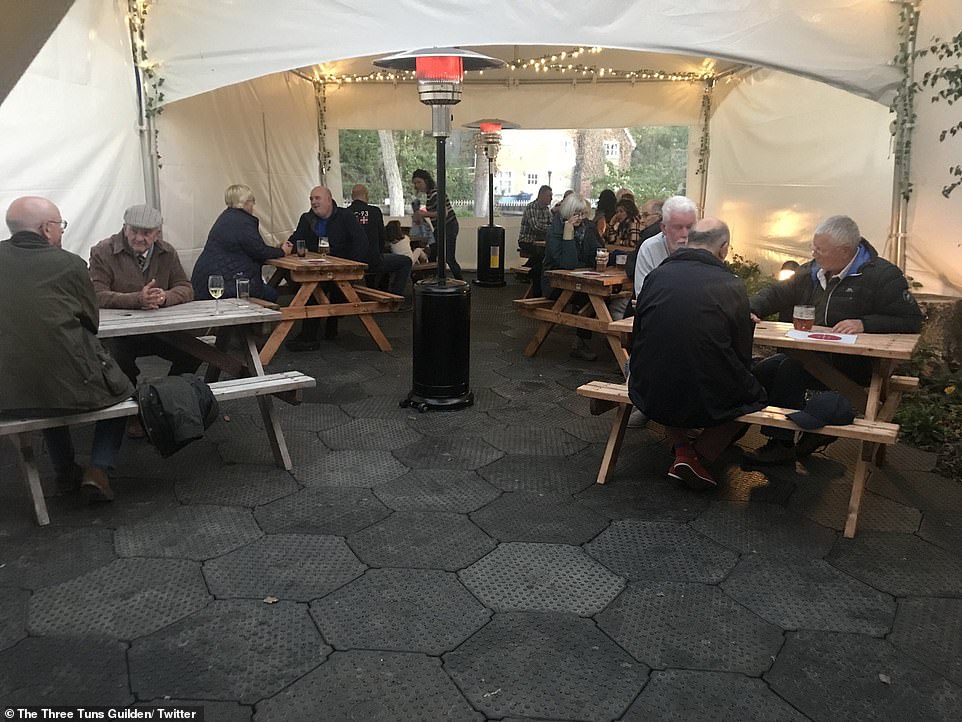 Punters enjoy a drink under a marquee with outdoor heating at The Three Tuns in Guilden Morden, Cambridgeshire

Others with covered outdoor areas include The Red Lion in Hollington, Derbyshire; The Horse and Groom in Wivenhoe, Essex; The Rose Revived in Hadlow, Kent; and The Old Boot Inn in Stanford Dingley, Berkshire.

Nik Antona, national chairman for the Campaign for Real Ale, told MailOnline today: ‘Beer gardens are an intrinsic part of British pub culture and the backbone of our summers.

‘This year, we’re in exceptional circumstances as more pubs have turned to putting up marquees and heating their outdoor areas to keep abreast of Covid-19 restrictions and social distancing measures.

‘While this will help some pubs in the lead up to winter, particularly on pleasant days, it’s not a long-term solution for our pubs to survive the winter, and many pubs have no outdoor space. Like it or not, the weather will turn, and our pub gardens will need to close at certain times.

‘That is why it is vital that the Government provides additional financial support for all hospitality businesses. Otherwise, we’re likely to see many pubs close their doors forever by Christmas.’

The demand for marquees has also meant good business for manufactures, with one firm Gala Tent reporting 50 per cent year-on-year growth and £1million-plus revenue for two months in a row the first time its 21-year history.

The company, which makes tents for the NHS, police and the military, had a 60,000 sq ft warehouse packed with summer stock during lockdown but demand soon soared as the hospitality sector reopened in July. 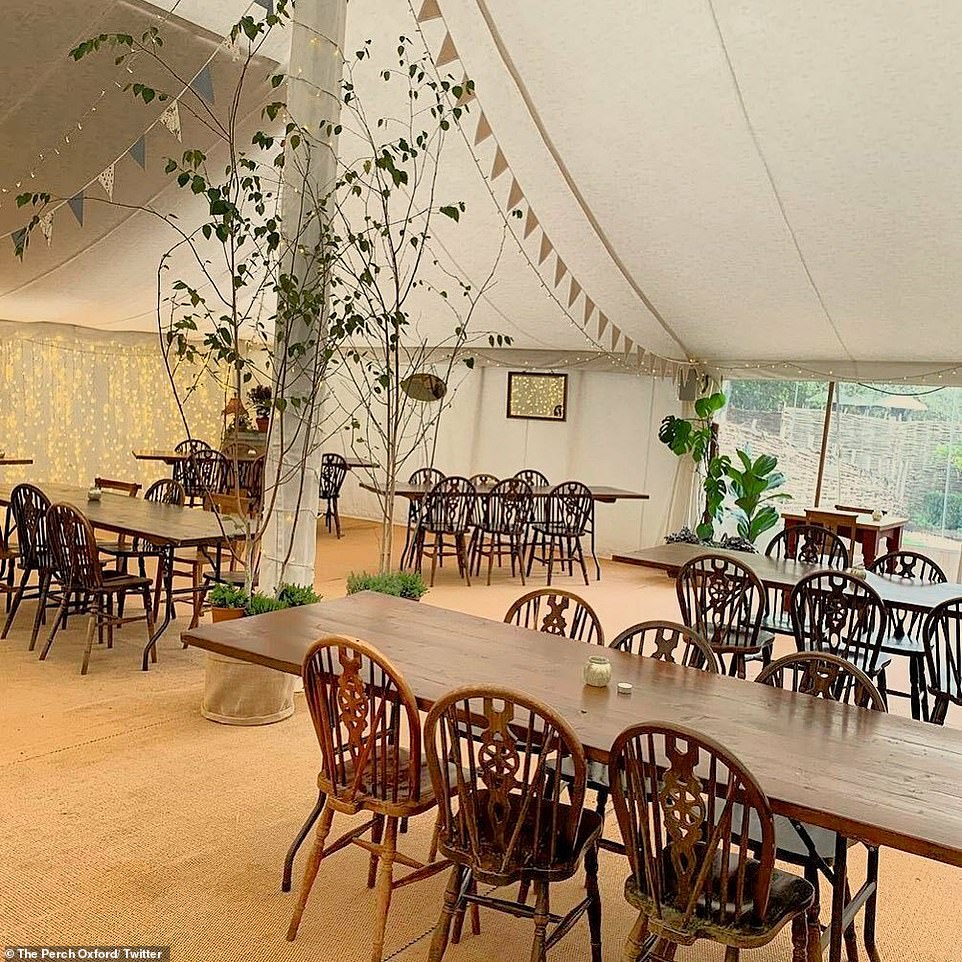 The Perch is a thatched 17th century country inn located in Binsey, Oxfordshire, which has put up a marquee in its garden

Gala Tent posted a 33 per cent growth year-on-year for July, then a 49 per cent increase for August, creating the most successful period in the history of the company based in the South Yorkshire town of Rotherham.

* Has your local come up with an interesting way of sitting people outside? Please email: [email protected] *

Chief executive Jason Mace said last month: ‘If you’re going to succeed as a company, you need to know that you can change direction at a minute’s notice and carry on regardless. The beauty of our products is their versatility.

‘It’s a wedding marquee one year but now it’s a way of pubs expanding their premises to ensure their own revenues don’t drop, or for schools to protect their children in the social distancing era.’

It comes after industry estimates revealed this week that pubs, bars and restaurants spent £900million on screens, masks and hand sanitiser to make their venues safe for reopening.

Bosses have spoken of their fury at spending the cash only to be forced to shell out again to adapt to an ‘ever-changing raft of ill-thought-out regulations’.

Each pub has spent more than £10,000 adapting the interiors of their venues, according to research, but many can now only entertain customers outside.

Tens of thousands of venues across the North of England have been plunged back into drastic restrictions, which industry leaders said are having a ‘devastating impact’ and will cost hundreds of thousands of jobs. 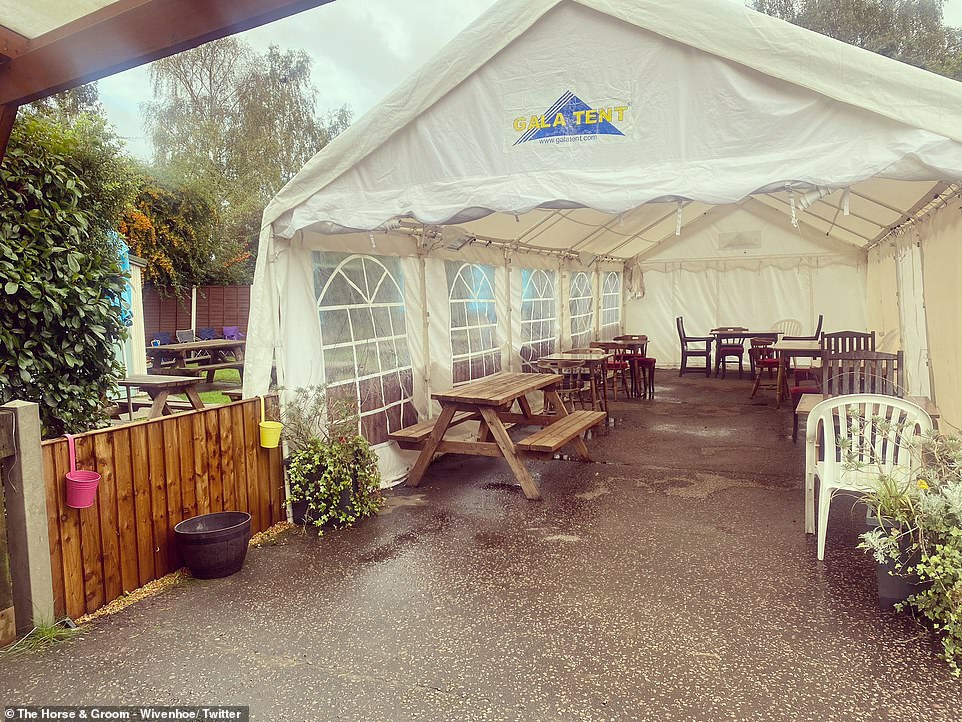 The Horse and Groom in Wivenhoe, Essex, is among the pubs which has used the services of Rotherham-based Gala Tent 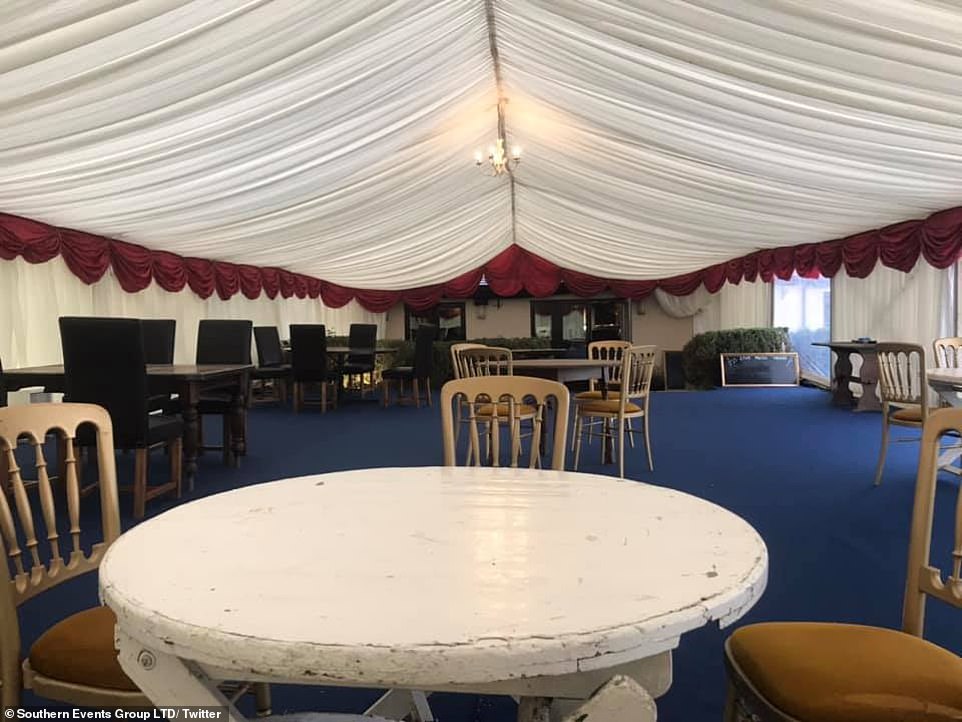 The Rose Revived in Hadlow, Kent, has put up a marquee for dining within its extensive land and gardens in the countryside

Household mixing has already been banned in tier two areas such as London and the North East, and Wales has shut all its hospitality businesses as part of a two-week ‘fire-break’ lockdown.

Amid growing anger, Chancellor Rishi Sunak was forced to extend the winter jobs scheme on Thursday, but fears remain for the future of thousands of businesses.

Official data suggests close to four in ten restaurants, pubs, hotels are at risk of going bust, and the majority are now loss-making.

But, even as restrictions were introduced for hospitality, Public Health England data showed that just 3.3 per cent of new infections were linked to the sector.

Tier three measures will force up to 5,000 pubs to shut in the North unless they serve ‘substantial’ meals, according to property adviser Altus Group. 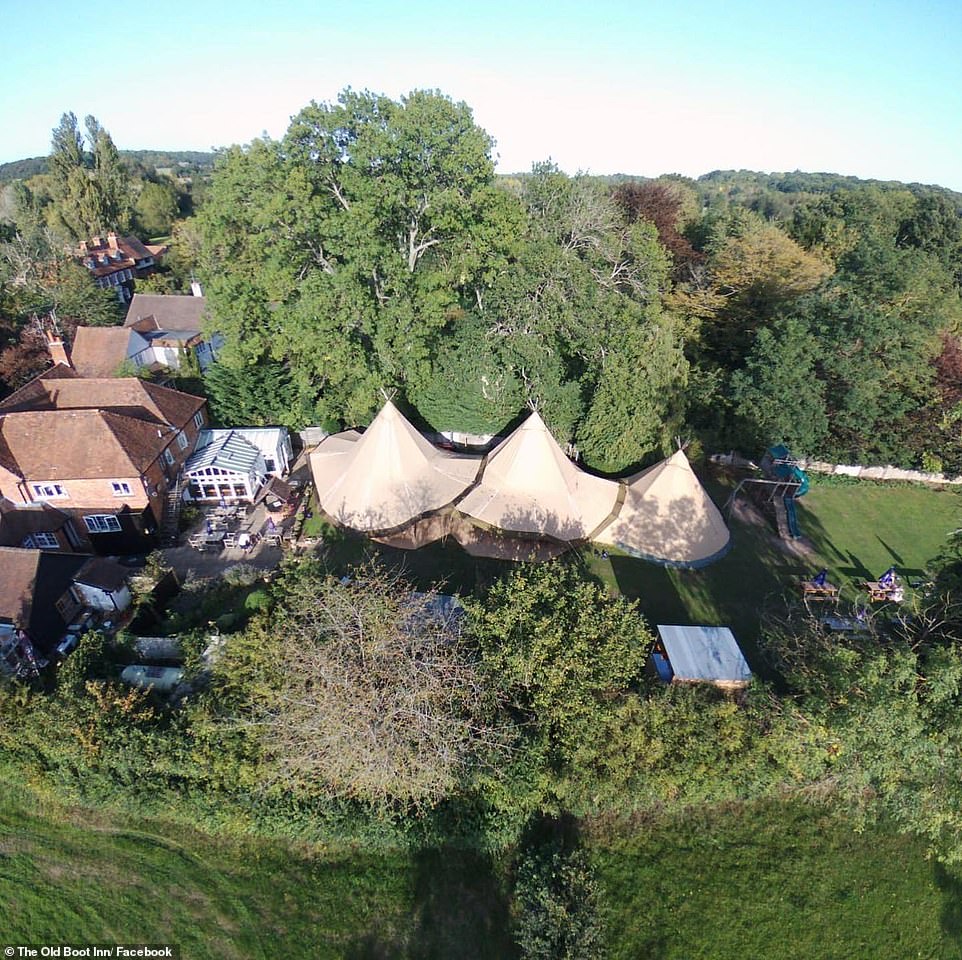 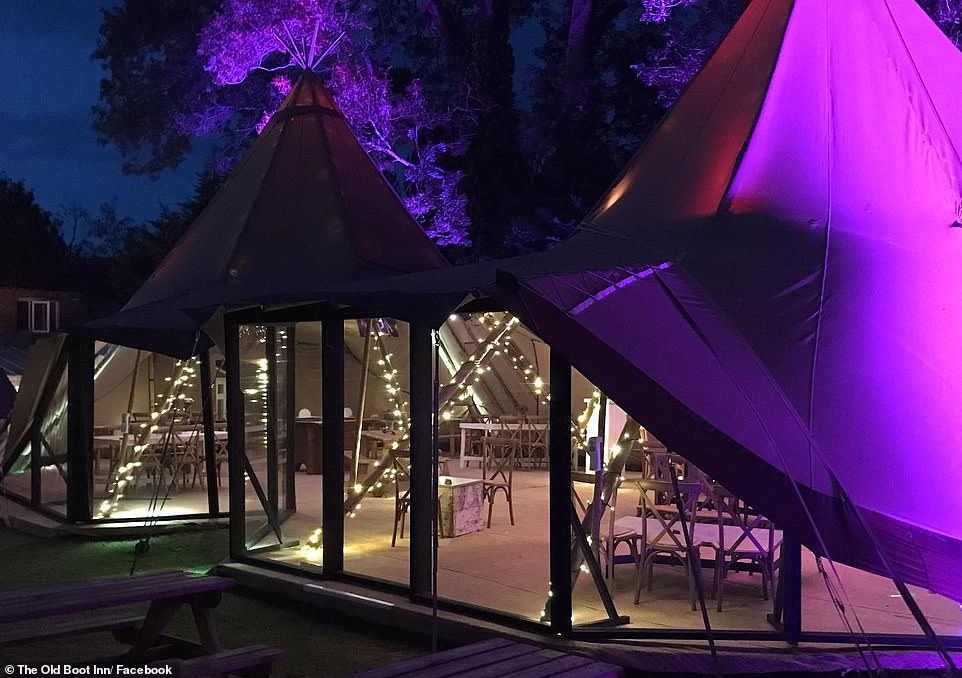 The teepee structure at the Old Boot Inn in Stanford Dingley, Berkshire, will allow people to eat or drink outdoors 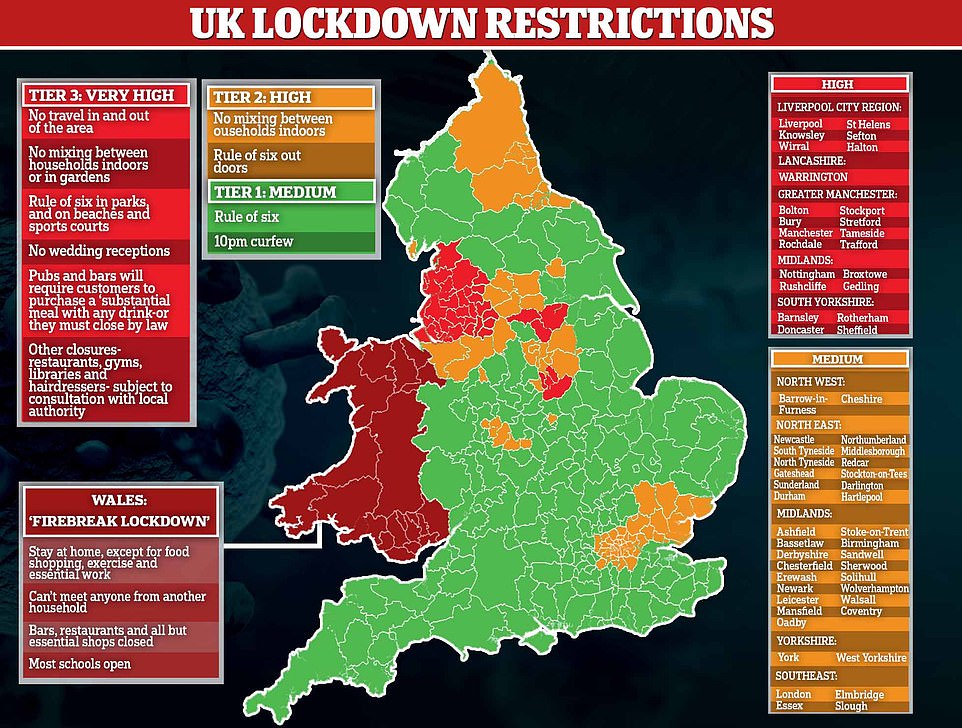 Since the start of the pandemic, more than 41,000 jobs have been lost from large companies in the hospitality sector.

Last week the boss of Marston’s pub chain blamed lockdown measures for the loss of 2,100 jobs at its 1,700 venues, saying they were the ‘inevitable consequence of the limitations placed upon our business’.

It is spending £2million to add heated outdoor seating areas to its pubs. Wetherspoons has spent £13.1million on getting its 875 pubs ready.

Its founder, Tim Martin, said the company is now being hit by ‘an ever-changing raft of ill-thought-out regulations’. It has announced up to 480 job cuts because of the pandemic.

* Has your local come up with an interesting way of sitting people outside? Please email: [email protected] *

A seventh of England’s population will be in the highest level of restrictions by the end of the week as Warrington and Nottingham enter Tier 3.

More than eight million people will be living under the toughest coronavirus measures as winter looms, but what does it mean and what can you do?

Here’s what you need to know about the tier system:

The UK Government confirmed on Monday that Warrington will be relegated to Tier 3 on Tuesday, with Nottingham and the boroughs of Broxtowe, Gedling and Rushcliffe set to join it on Thursday.

They join Greater Manchester, which was forced into top tier restrictions at midnight on Saturday despite the best efforts of Mayor Andy Burnham for extra support for the city.

Large areas of South Yorkshire including Barnsley, Doncaster, Rotherham and Sheffield were also placed into Tier 3 at the same time, after the region secured a £41 million funding package.

Liverpool City Region has been languishing in Tier 3 since October 14, and was joined by Lancashire two days later.

– What does Tier 3 mean exactly?

Expect extreme curbs to your social life – social mixing is banned both indoors and in private gardens, while pubs and bars must close unless they can operate as a restaurant.

The rule of six applies in some outdoor settings such as parks, public gardens and sports courts.

Deliberately flouting the rules can net you a fine of up to £6,400, while those who organise gatherings of more than 30 people can be fined up to £10,000.

Local leaders help the Government to determine whether other venues should be closed, such as gyms or casinos.

Shops and places of worship can remain open, as can schools and colleges, while universities must reflect wider restrictions with the option to move to greater online provision.

Up to 15 guests are allowed at weddings and 30 people can attend funerals, with 15 allowed at wakes, but wedding receptions are not permitted.

People living in Tier 3 areas are advised against overnight stays in other parts of the UK and should avoid travel where possible in and out of the area, unless it is for work, education or caring responsibilities.

Number 10 confirmed that, under Tier 2 and 3 rules on household mixing, people can still meet up for work meetings indoors under certain circumstances.

Areas categorised as high risk have restrictions on household mixing indoors, while the rule of six continues to apply outdoors.

People must not meet socially with friends and family indoors in any setting unless they live with them or have formed a support bubble with them.

Shops, gyms, all education settings, and places of worship can remain open, with overnight stays permitted.

Up to 15 guests are allowed at weddings and up to 30 people allowed at funerals, with 15 allowed at receptions and wakes.

Travel advice for those living in Tier 2 areas is to reduce the number of journeys they take where possible and avoid travel into very high Tier 3 areas.

– What restrictions are placed on areas in Tier 1?

Areas classed as medium risk, those in Tier 1, are subject to the same national measures which were commonplace across England earlier this year.

These include the 10pm curfew for pubs and restaurants and a ban on most gatherings of more than six people.

Like Tier 2, up to 15 guests will be allowed at weddings and up to 30 people allowed at funerals, with 15 allowed at receptions and wakes.

Shops, gyms, all education settings, and places of worship will remain open, with overnight stays permitted and no travel restrictions within the area, although people are advised to avoid travel into Tier 3 areas where possible.