Vatican City: Pope Francis and the Queen have shared Easter messages of hope amid what the Pope described as "our darkest hour" from a nearly empty St Peter's Basilica.

The pontiff likened the fears of current times to those experienced by Jesus's followers the day after his crucifixion. 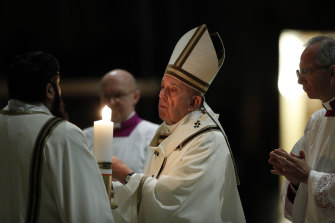 Pope Francis presides over a solemn Easter vigil ceremony in St Peter’s Basilica empty of the faithful following Italy’s ban on gatherings to contain coronavirus contagion, at the Vatican.Credit:AP

"They, like us, had before their eyes the drama of suffering, of an unexpected tragedy that happened all too suddenly," Francis said during Saturday's mass.

"They had seen death and it weighed on their hearts. Pain was mixed with fear. Then, too, there was fear about the future and all that would need to be rebuilt.

"For them, as for us, it was the darkest hour."

Francis encouraged the faithful to sow "seeds of hope, with small gestures of care, affection of prayer".

"Tonight we acquire a fundamental right that can never be taken away from us: the right to hope," Francis said.

He acknowledged the difficulty of obtaining optimism, saying "as the days go by and fears grow, even the boldest hope can dissipate".

Describing the Easter message as a "message of hope", Francis urged Christians to be "messengers of life in a time of death".

In a special audio message on Twitter, the Queen said that coronavirus "would not overcome us" as she delivered her second rallying message to the nation in a week.

The 93-year-old monarch, who is the symbolic head of the Church of England, also stated that "Easter isn't cancelled" in her first ever address to mark the Christian holy day.

"This year, Easter will be different for many of us, but by keeping apart we keep others safe. But Easter isn't cancelled; indeed, we need Easter as much as ever," she said.

Last Sunday, Elizabeth gave only the fifth televised address of her 68-year reign to say that if Britons stayed resolute in the face of a lockdown and self-isolation, they would beat the COVID-19 pandemic.

On that occasion, she made reference to her experience of World War II, but this time the monarch, who takes her religious faith seriously, used the Easter message to reinforce that message.

"The discovery of the risen Christ on the first Easter Day gave his followers new hope and fresh purpose, and we can all take heart from this," she said in the audio recording.

"We know that coronavirus will not overcome us. As dark as death can be – particularly for those suffering with grief – light and life are greater. May the living flame of the Easter hope be a steady guide as we face the future."

The Queen is usually joined by other senior members of the royal family at a traditional Easter service at Windsor Castle, where she is staying with her husband Prince Philip, 98.

However, the service will not take place this year because of restrictions on social gatherings including a ban on church services.

"I wish everyone of all faiths and denominations a blessed Easter," the Queen said.