Police shut down the Hokey Cokey: Officers move in as anti-lockdown group including children breaks Covid rules by putting left leg in, right leg out and shaking it all about in park

Police officers were called to shut down a round of the Hokey Cokey after families gathered to enjoy the weekend sunshine.

Officers attended the jig at around 10.30am on Sunday and engaged with the dancers as they put their left leg out, right leg out, turned around and dispersed.

Video footage shows the large group including children all holding hands in a circle before running in and out of the centre towards each other.

They can be heard singing the lyrics to the popular kids’ song at Alexandra Park in Hastings, East Sussex.

Posting on the Facebook page of A Stand in the Park, a group for Unity, Freedom and Personal Truth, one of the attendees said: ‘I attended the first Stand in Hastings this morning. There were about 100 present, ages from baby to 80.

‘We stood around in clumps, chatting, over an area of about 20 metres across. Then music started from a boom box and a dance troupe did a short synchronised rehearsed routine. 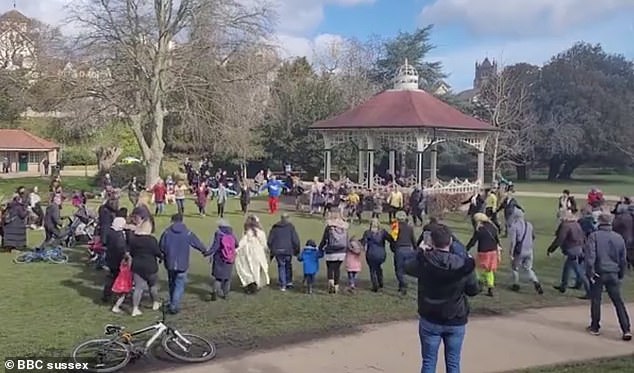 Pictured: Police officers were called to shut down a round of the Hokey Cokey after an anti-lockdown group gathered in Alexandra Park, Hastings, East Sussex, on Sunday morning

‘There was a bit of a hokey-cokey, then we all held hands in a circle, at which point, at about 10.20am, two police constables rolled up in a car and watched us for a few mins, then got out of the car, wearing masks, and stood really close to the perimeter.

‘Then more police came until there were about eight, and half went to the far side of the Standers, as though trying to ‘surround’ or ‘kettle us’ but with such woefully inadequate numbers that they had no chance.

‘They chatted with a few Standers but I don’t think they told anyone to leave. They were asking which of us it was who organised it.’

A Stand in the Park is an anti-lockdown movement which appears to have been launched in Australia but there are now groups across the world.

The group says it has come about because ‘people are drawing their own line in the sand, saying enough is enough, and standing together for unity, for truth & for freedom.’ 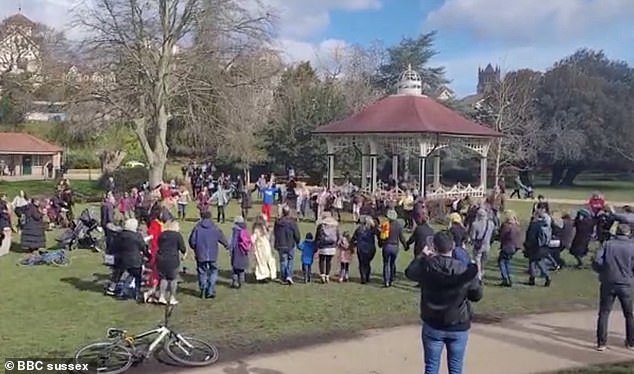 People are only permitted to exercise outside with one other person and while the risk of transmitting Covid-19 is lower when you are outside, singing can spread the droplets more easily.

It is unclear how many households were involved in the singalong or how many were wearing masks.

Police deemed no enforcement action was required as the chirpy group voluntarily dispersed after their sing-song.

A Sussex Police spokesman said: ‘We were made aware of a gathering of about 40 people in Alexandra Park, Hastings, on Sunday morning.

‘Officers attended to engage with those present, explaining the government’s coronavirus regulations and encouraging people to follow them.

‘The group engaged with officers and voluntarily dispersed so no enforcement action was required.

‘The government’s coronavirus regulations are in place to help stop the spread of the virus, protect the NHS and save lives.

‘We will continue to use the four Es – engaging, explaining, encouraging and, where necessary and proportionate, enforcing.’