An item which was handed into police at the weekend is being examined to determine if it is linked to the disappearance of missing Victorian campers Russell Hill and Carol Clay.

The breakthrough comes several days after police made a renewed appeal for information about the missing pair. 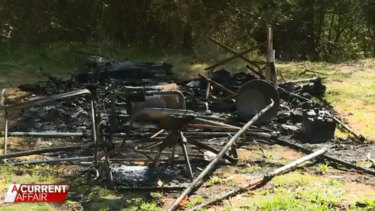 The burnt campsite discovered by campers on March 21. The fire was cold by the time it was discovered. Credit:A Current Affair

After a year, investigators have been able to identify all vehicles seen in the area near the pair’s campsite, except for a single car.

It was a white dual cab ute, and the exact make and model is unknown. There is nothing to indicate the vehicle or its occupants were linked to the pair’s disappearance, but police hoped those travelling in the ute could have new information.

“It might seem like only a very small possibility that those in the white ute will have information about Russell and Carol’s disappearance, but we can’t afford to leave any stone unturned,” said the head of the missing persons squad, Detective Inspector Andrew Stamper.

“We cannot leave any what ifs when it comes to an investigation like this.” 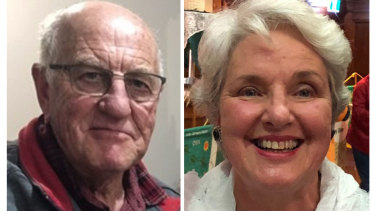 “The grief that these families have had to deal with over the past year, coupled with immense public speculation, is immensely difficult to comprehend.

“We will not give up on the possibility that we can give those families the answers they need – but we cannot do this without the public’s help.”

Police are still keen to speak to anyone who was in the Wonnangatta area around the end of March so police can continue to eliminate people and vehicles from their extensive investigation.

Detectives are also keen to speak to anyone who was in the area of Howitt Plains and Zeka Spur track on March 19 or 20, and the Wonnangatta Valley and Wonnangatta Station between March 20 and 24.

March 19: Russell Hill leaves his home in Drouin with plans to visit various campsites along the Dargo River. He is seen by neighbours picking up Carol Clay from her home in Pakenham at 7.30am. Phone tracking shows the pair travelled through Heyfield and Licola to get to Wonnangatta Valley.

March 20: Mr Hill was last heard from via HF radio where he told a friend in the amateur radio community he was at Wonnangatta Station in the Victorian Alps setting up camp before dark.

March 21: Campers find Mr Hill’s white Toyota landcruiser with signs of minor fire damage, and their tent and some belongings torched near the Dry River Creek Track in the Wonnangatta Valley. A search begins.

March 30: Police appeal for public help in finding the pair. Air surveillance and the dog squad are out searching, helped by members of the State Emergency Service, Parks Victoria and the Mountain Cattlemen’s Association of Victoria.

April 6: The search is called off. Police make another appeal for information and reveal the Wellington Crime Investigation Unit will help investigate.

April 14 and 15: Search resumes again, focusing on more rugged terrain in the region. It is called off after no results.

“It is still yet to be fully determined whether the pair’s disappearance is suspicious,” a police spokeswoman said.

Mr Hill was seen by neighbours loading Ms Clay’s bags into his car as he picked her up from her home in Pakenham on March 19.

He was last heard via HF radio on March 20 where he told a friend he was at Wonnangatta Station in the Victorian Alps setting up camp before dark.

Mr Hill promised to call back the next day but never did. His call sign was VK3 VZP and anyone who heard this signal is being urged to contact police. 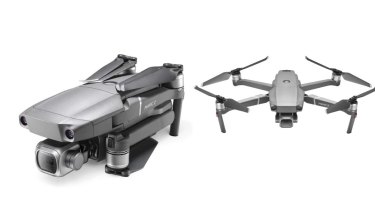 A photo of a DJI brand and Mavic model drone, similar to the one Russell Hill had recently bought.Credit:Victoria Police

Their tent and some belongings were found burnt to the ground next to Mr Hill’s slightly scorched Toyota LandCruiser on March 21 at their campsite near the Dry River Creek track.

The Age previously revealed that Ms Clay had settled on a brand-new property in Melbourne’s south-east a week before the pair’s mysterious disappearance.

The property, built in the past year and close to Pakenham shops and train station, settled on March 12, seven days before the pair left. Those close to Ms Clay say she was happy and content in her new home.

Police have also confirmed Mr Hill was camping alone in the area of the King Billy and Bluff tracks for two days from March 11, about 10 days before he disappeared.

He was driving his LandCruiser and had his drone.

Anyone with information should call Crime Stoppers on 1800 333 000 or anonymously online at www.crimestoppersvic.com.au.