Planning approval for more than 12,000 homes will be fast-tracked by up to 15 months under Victoria’s $5.3 billion social housing blitz.

The state government – rather than local councils – will assess and approve all projects, which is expected to reduce the time to taken receive planning approval from 18 months to three months. 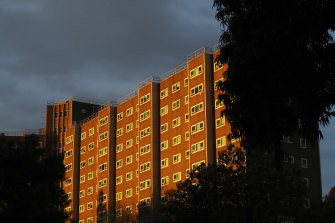 However, Housing Minister Richard Wynne told an online forum the Department of Health and Human Services and community housing providers would still be required to consult with councils and communities, and appeal rights to the Victorian Civil and Administrative Tribunal would remain.

Mr Wynne said Energy and Environment Minister Lily D'Ambrosio would take responsibility for planning decisions, to prevent any conflict of interest he might have given he is both the housing and planning minister.

Meanwhile, the state government will announce on Tuesday an allocation of $112 million in the state budget to upgrading heating, cooling and hot water in more than 35,000 social housing properties.

The energy efficiency upgrades – which include sealing doors and windows – are aimed at reducing bills, making homes more comfortable and creating more than 200 jobs.

"Not only are we building more than 12,000 brand new homes, which will all meet seven-star energy efficiency standards, we’re ensuring Victorians who already have a home get the upgrades they need to be comfortable during winter and summer," Mr Wynne said.

The state government has pledged to build more than 12,000 homes in four years to tackle homelessness and create jobs, with construction to start on 1100 by the middle of next year and another 5000 in 2021-22.

"Given the economic circumstances that we face, getting construction activities that happen quickly is really crucial and we cannot afford to have planning delay in that regard," Homes Victoria CEO Ben Rimmer said at an online forum.

These were previously earmarked for redevelopment under the government’s Public Housing Renewal Program, in which public housing estates are sold to developers that rebuild them with a mix of private apartments and social housing.

The government said a number of the sites formerly considered for the Public Housing Renewal Program will be delivered in the $5.3 billion package. "Because these sites have been vacated and demolished, they will allow the Big Housing Build to get off to a fast start, and will be delivered under a different model that delivers mixed-tenure housing, while retaining ownership by Homes Victoria," the government said.

Under the $5.3 billion package, more than 9300 social housing homes will be built, including the replacement of 1100 dilapidated public housing units.

Social housing includes both public and community housing and is provided to people on low incomes, with priority given to those who have experienced homelessness, family violence or mental health issues.

The package also includes 2900 affordable homes, to be let at below-market rates, built to help people on low to moderate incomes live closer to where they work.

"I’m very proud that the government has shown faith in the community housing sector to deliver on the majority of this unparalleled growth in social housing," Ms Dredge said.

"We have had nothing like this ever before … it’s incredibly exciting."

However, the Renters and Housing Union said public housing – which is owned by the government – was cheaper and more secure for tenants.

"We’re relieved that the government is investing in social housing, but it’s troubling that there’s no clear commitment to public housing," said Renters and Housing Union organiser Jesse James Frances.

The government has announced an independent review of Victoria’s social housing regulatory system, to strengthen oversight of community and public housing.

It will be chaired by RMIT emeritus professor David Hayward, a former Community Housing Industry Association board member.