Animal rights activist group PETA is the target of a barrage of jokes on social media after it claimed that calling people names such as ‘chicken’, ‘pig’ and ‘sloth’ is insulting to animals.

PETA, otherwise known as the People for the Ethical Treatment of Animals, argued in a tweet Tuesday that using animal names as an insult promotes the ‘myth that humans are superior’ and ‘normalizes violence against other animals’.

The group also argued that the ‘anti-animal slurs’ are inaccurate and suggested other non-animal-based insults that could be used.

The tweet sparked a wave of backlash for the advocacy group, known for their provocative statements and campaigns, with social media users arguing that animals have ‘no concept of words’ and accusing it of using language meant for human rights.

Some vegans claimed the tweet was making them all look ‘ridiculous’ while Texas Senator Ted Cruz simply called the idea ‘Bull****’, in direct provocation to the group’s original tweet. 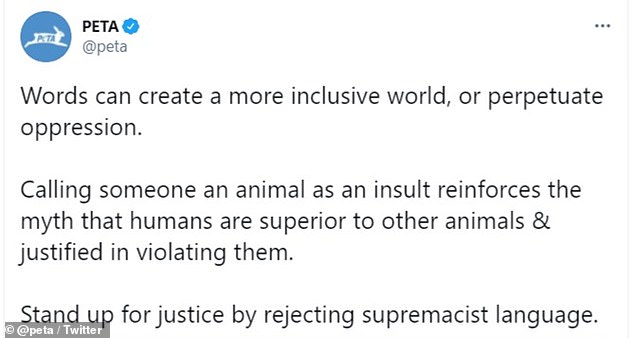 On Tuesday, animal rights activist group PETA posted a tweet in which they claimed that people need to stop calling someone an animal as an insult as it will ‘perpetuate oppression’ 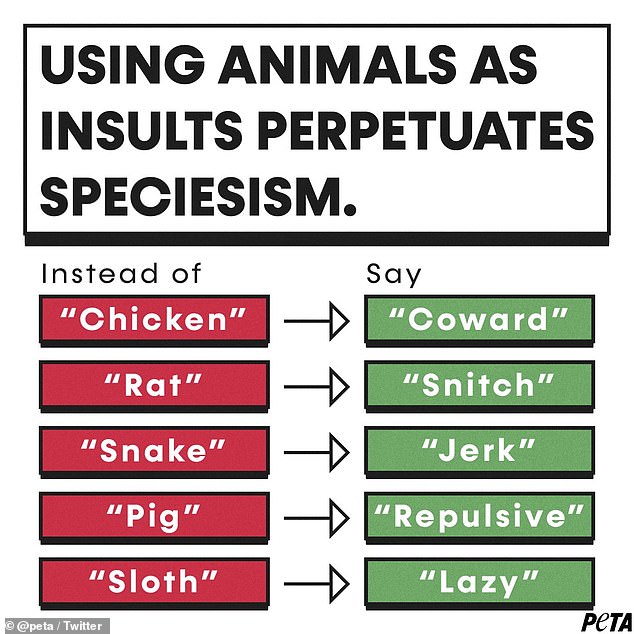 It sparked a wave of jokes including this edited chart reading: Instead of PETA, say trash’

PETA had shared the original tweet on Tuesday alongside a graph in which it suggested potential insults to use instead of an animal name.

It included coward instead of chick, jerk instead of snake, repulsive instead of pig and lazy rather than sloth.

‘Calling someone an animal as an insult reinforces the myth that humans are superior to other animals & justified in violating them. Stand up for justice by rejecting supremacist language.

‘Anti-animal slurs degrade animals by applying negative human traits to certain species. Perpetuating the idea that animals are sly, dirty, or heartless desensitizes the public and normalizes violence against other animals.

‘Speciesist language isn’t just harmful, but it is also inaccurate,’ the group argued.

‘Pigs, for instance, are intelligent, lead complex social lives, and show empathy for other pigs in distress. Snakes are clever, have family relationships, and prefer to associate with their relatives.

‘PETA urges everyone who believes in equality and justice to take a look at their personal beliefs and the language they use and break free of this outdated mindset that denigrates other animals.

‘Always be kind and consider not using insults at all.’

It immediately sparked a flurry of jokes about the group as well as some criticism on their previous campaigns.

‘You must be forgetting the time you compared fat women to whales,’ hit back author Michelle Elman, sharing an image of an old PETA billboard in which they urged people to ‘save the whales, lose the blubber, go vegetarian’.

The words featured alongside a woman on the beach. 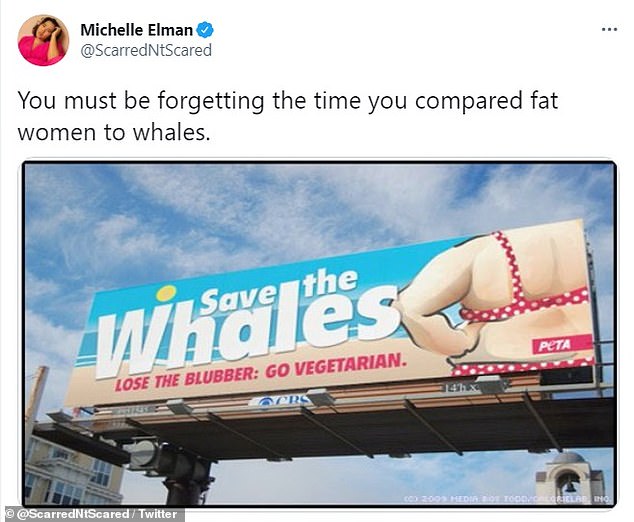 It also sparked some criticism on their previous campaigns, as pictured above

‘PETA is a parody of an animal rights group. They must be,’ wrote author Mark Dice.

‘Your name is offensive to pets because it reinforces the myth that all pets are ludicrously woke imbeciles,’ answered Piers Morgan.

Some animal rights activists claimed that PETA is working against the movement by focusing on the wrong issues in their tweet.

‘Sometimes I reckon you lot do stuff like this to actively help the anti-vegans,’ wrote an account named Lauren Dudley.

‘I reckon PETA has a mole. A funny one,’ she joked.

‘Some animal rights activists out there do important work. Not PETA though. PETA complains about “anti-animal” slurs online,’ added journalist Lauren Chen.

‘I can’t tell if this is real or you guys are making fun of yourselves,’ asked one user while another offered an edited version on PETA’s graph back to them reading, ‘Instead of saying Peta, say trash’.

Some social media users argued that PETA is working agasint themselves

Yet others accused PETA of oppression themselves by taking language from the human rights movement.

‘Appropriating the language of human rights movements and applying it to animals is repulsive Did I do that right?’ wrote Liz Bernstein.

And others argued about the accuracy of PETA’s statement.

‘I think the drive thru people will be confused if I try to order coward nuggets and fries,’ mocked one person.

‘Animals aren’t oppressed by those words because they don’t understand our language. And have no concept of words and their meaning,’ argued a user named Roxie.

‘If you believe in equality and justice, it isn’t hard to see how calling someone an animal as an insult can further animal suffering,’ PETA answered as they doubled down on the tweet.

‘All the horror inflicted upon animals is rooted in the false idea that they are less than us and not deserving of respect.’

‘Come back to me about being less superior than animals when an anteater builds a house,’ another user had said in response. 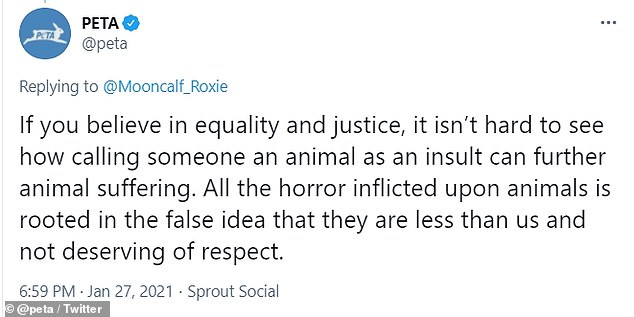 PETA also answered this tweet arguing: ‘Building houses is a skill humans excel at, yet there are plenty of skills and talents other animals have humans can only dream of – birds can soar through the sky at ease, ants can organize their labor towards a collective goal, and salmon can swim upstream to find their home!’

One user, however, pointed out that PETA euthanizes some of the animals in its shelters due to overcrowding, which they claimed was not in keeping with the group’s mission.

‘Instead of saying Peta, we should say Animal slaughters,’ they wrote.

‘PETA euthanizes animals that end up homeless and unwanted thanks to society’s casual acquisition and breeding of dogs and cats,’ PETA answered.

‘The solution is prevention. PETA spends millions every year on spaying and neutering and promoting adoption. Stop trolling and do your part!’

PETA is not backing down, however, and in a follow-up tweet on Wednesday began to ask dictionaries to remove the definitions under animal names that described humans.

It included the definition of dogs as a ‘despicable man or youth’ and a pig as a ‘dirty, gluttonous or repulsive person’.