Pervert, 66, who shoved a COURGETTE down his leggings before simulating a sex act in front of horrified shoppers and children for an HOUR is jailed 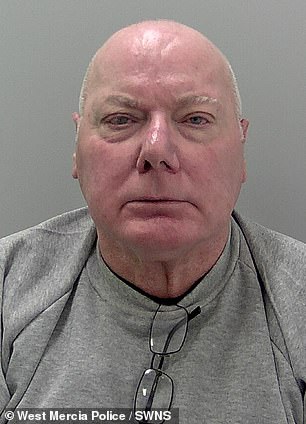 Geoffrey Chambers, 66, was spotted leaning against a market stall pole by an off-duty police officer in Hereford’s High Town at around 12.30pm on December 12

A pervert who shoved a courgette down the front of his leggings before simulating a sex act in front of disgusted shoppers and children for more than an hour has been jailed.

A court heard Geoffrey Chambers, 66, was spotted leaning against a market stall pole by an off-duty police officer in Hereford’s High Town at around 12.30pm on December 12.

Prosecutor Cathlyn Orchard said the pervert, who was wearing a coat, tight leggings and a face mask, kept trying to make eye contact with the officer’s wife, as well as other women in the town.

Chambers, who had only been released from prison two months earlier after serving time for two attempted child sex offences, then started touching a large, long item in his leggings, Hereford Crown Court heard.

He simulated the sex act and ‘paraded himself’ for more than an hour, causing one witness with her 14-year-old daughter to ‘feel sick’ and go home, before he was arrested by police, Ms Orchard said.

Chambers then removed the courgette which was tied around his waist with string. When officers searched the pervert’s car, they found more courgettes, the court was told on Friday.

Ms Orchard said Chambers had 31 cases of indecent exposure to his name which had resulted in prison time and sexual harm prevention orders.

The court also heard that Chambers had recently committed two similar acts in Swansea and Cardiff, but only received a warning from police in South Wales.

Chambers, of Cwmbran, pleaded guilty to one count of public order offence and one of outraging public decency and was sentenced to eight months in prison. 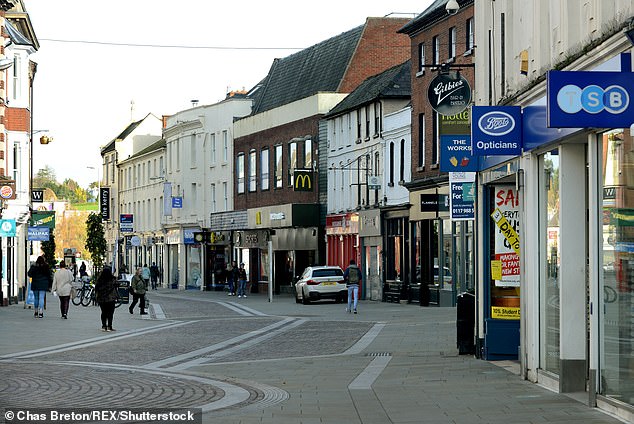 Sentencing Chambers, Judge Martin Jackson said most shoppers in High Town reacted with ‘disgust and repulsion’ at what they saw.

He rejected the defence view that Chambers was a decent prospect for rehabilitation and called his actions ‘offensive, disturbing and alarming’.

Defence barrister Emily Heggadon said since the release from prison last October he had rekindled the relationship with his daughter.

Ms Heggadon said Chambers admitted in a police interview that the act was something which would ‘help him out of the low mood’.

She argued any prison sentence should be suspended, as Chambers had recently secured permanent accommodation in Cwmbran and was working to improve his mental health.

The lawyer added Chambers wished to apologise and his ‘intentions were not to convey sexual connotations but that’s how it was perceived by some individuals’ and he wanted it to be a ‘more light-hearted’ act.

Chambers’ current sexual harm prevention order was modified. He must also pay a statutory surcharge, but does not have to pay costs.