Parish council Zoom wars spread across the UK: Chairman tells rival to ‘wipe that smirk off your f***ing face, you f***ing piece of s***’ in ANOTHER astonishing rant

Unbelievable footage shows yet another parish council zoom meeting in Cheshire descending into chaos as a councillor mutters, ‘Wipe that smirk off your f***ing face, you f***ing piece of s**t’ – not realising he is unmuted.

The heated clip, involving members of Penketh Parish Council, has emerged just days after a chaotic Zoom meeting in Handforth (40 miles away) in December, which included the now-famous outburst, ‘You have no authority here, Jackie Weaver!’

In the latest video, from last October, the-then Penketh Parish Council chairman David Simm, from Warrington, delivers a profanity-filled rant about a rival under his breath.

After asking members if they were in agreement over starting a tendering process, Mr Simm – unaware that his mic is on – can be heard saying: ‘Wipe that f***ing smirk of your face, you f***ing piece of s**t.’

Stunned into shock, the 11 other callers in the meeting begin to laugh, with councillor Christine Wych heard saying ‘Oh my God’, as others try to decipher who the insult was aimed at. 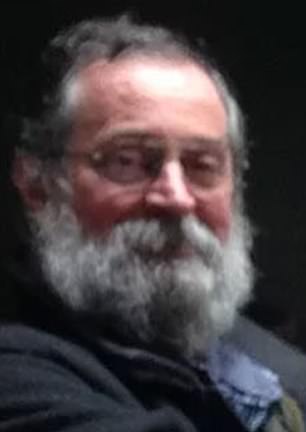 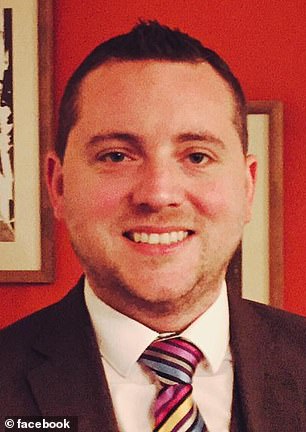 In video footage from a Penketh Parish Council meeting last October, chairman David Simm (left), from Warrington, asks members if they are in agreement over starting a tendering process. Unaware his mic is on , he says ‘Wipe that f***ing smirk of your face, you f***ing piece of s**t’ – to which Cllr Craig Lenihan (right) responds, ‘He’s speaking to me’

Another councillor, Dale Solan-Cooper, says: ‘Who are you actually speaking to there?’ – to which councillor Craig Lenihan answers: ‘He’s speaking to me.’

Councillor David Keane, who is also Cheshire’s police and crime commissioner, quickly steps in, telling the meeting: ‘Can we please bring this back together?

‘There’s been lots of personal attacks this evening that are way out of the realms of the council. Whilst we can understand everyone’s frustration, we are going to get to a stage where this is utterly unprofessional.’ 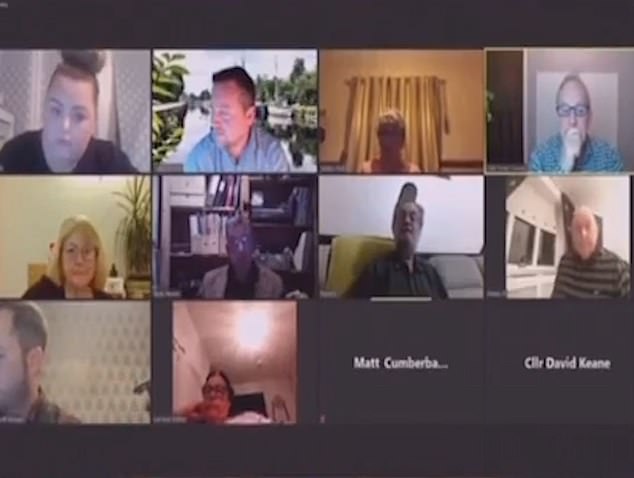 David Simm is seen in the meeting, second row, second from the right. The outburst came amid growing disagreements between Labour and independent parish councillors. Mr Simm, who has since resigned from his position as councillor, issued an apology citing ‘constant personal attacks from within our own council’ as the reason for his outburst. (Craig Linehan is seen above, top row, second from left)

The outburst came amid growing disagreements between Labour and independent parish councillors.

Mr Simm, who has since resigned from his position as councillor, issued an apology citing ‘constant personal attacks from within our own council’ as the reason for his outburst.

He said his language was unacceptable and that he thought his microphone was on mute.

Among the others present were Warrington Borough Council’s chief executive Steven Broomhead, who virtually addressed members ahead of the meeting.

Councillor Lenihan shared the meeting at the time on his Facebook page, with the caption: ‘No one should be spoken to in this manner and I called for his [Mr Simm’s] immediate resignation.’

Shortly after the incident, Cllr Lenihan told the Warrington Guardian: ‘I know the chair, Cllr David Simm, was directing those disgusting remarks at myself as, later in the video when I shake my head in disgust, he also acknowledges that.’ 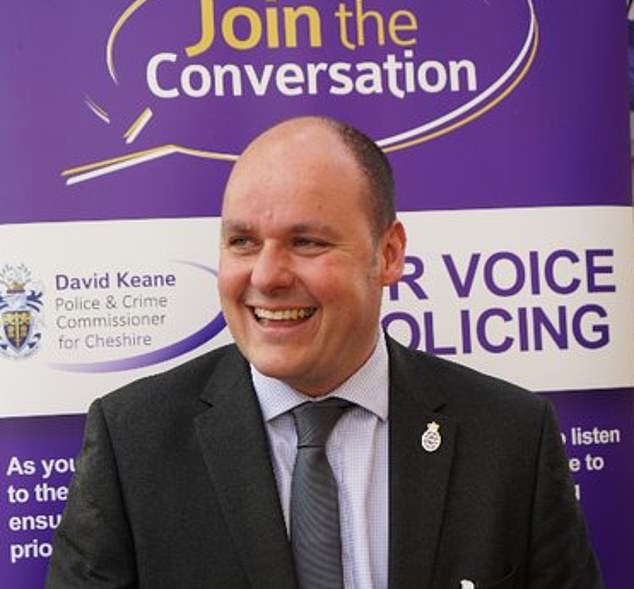 As Mr Simm unleashes his profanity-strewn rant, Councillor David Keane (above), who is also Cheshire’s police and crime commissioner, quickly steps in, telling the meeting: ‘Can we please bring this back together?’

Mr Simm told the paper: ‘As many of you know, I’m a mild-mannered individual and have worked alongside many of the community in my voluntary role with the food hub throughout the pandemic.’

He added that he ‘broke’ due to simmering tensions between parish members over a number of months, and apologised.

The parish is narrowly controlled by six Labour councillors with five independent members.

On October 30 last year, Mr Simm was administratively suspended from the Labour Party, pending investigation, according to Cheshire Live.

But barely a month later, Mr Simm was booted out of yet another Zoom call after he yelled, ‘F**k off!’ during a section of the Parish Council meeting that was open to the public.

On that occasion, he claimed the outburst had been down to his cat scratching his foot.

A Warrington Borough Council spokesperson said: ‘Parish councils are responsible for managing their own affairs, but there is an established process in place for the council’s Standards Sub-Committee to consider any complaint which is received alleging a breach of the Councillors’ Code of Conduct. This applies both to borough and parish councillors.’

Footage from the Penketh meeting emerged online this week on TikTok following the viral success of another Cheshire parish council meeting in Handforth that took place on December 10.

During the seven-minute edited highlights package of the planning committee hearing, someone is heard exclaiming, ‘F*** off’ at the start, a toilet flushes and another person answers the front door as councillors from two rival factions struggle with the mute button.

The ill-tempered meeting descended into chaos when some members claimed the meeting was illegal and not in keeping with standing orders.

And the video made an unlikely star of clerk Jackie Weaver – who catapulted to fame this week when she kicked council chairman Brian Tolver out of the Zoom meeting.

Mr Tolver was thrown out of the pre-Christmas hearing – the second meeting in a row – after he accused rival councillors of calling it illegally and yelling: ‘You have no authority here, Jackie Weaver! No authority at all!’ and repeatedly telling her to ‘stop talking’.

Jackie, acting as the clerk, then kicked him off Zoom for being ‘disruptive’.