Parents of a baby girl who died after complications during her birth have received a written apology and a payout from hospital bosses – four years after her death.

Nicky Baines was 36 weeks pregnant when she went into labour with twins Eleanor and Lucas at Wythenshawe Hospital, south Manchester, back in September 2016.

Mrs Baines had already given birth to Lucas naturally before her placenta burst whilst daughter Eleanor was still in the womb.

An inquest into Eleanor’s death previously found there was ‘an absence of monitoring of the foetal heart rate’ when she was born minutes after her twin brother.

Mrs Baines was left with three midwives who had never delivered twins before, the 2018 inquest heard. 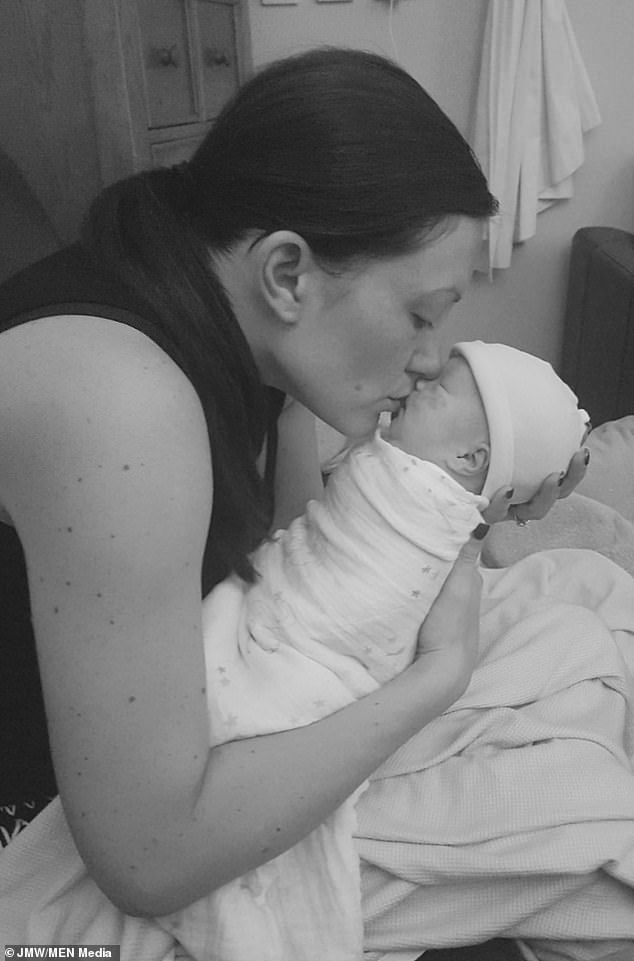 Nicky Baines’s baby daughter Eleanor, who died on September 21, 2016, six days after she was born

When they tried to call for a doctor they were told all were busy in theatre before Mrs Baines was eventually transferred to theatre for an emergency caesarean section.

Eleanor was born seriously ill and had to be resuscitated.

She died six days later on September 21, with tests showing the placenta abruption had likely caused a fatal brain injury.

Manchester University NHS Foundation Trust, which runs the hospital, has now written to Mrs Baines and her husband Colin to apologise for mistakes made during the birth.

It’s the first time the couple, from Hale, Greater Manchester, have had a written apology for the failures they experienced.

Ms Connolly wrote: ‘Following a detailed investigation, the Trust accepts that there should have been continuous monitoring of Eleanor following the birth of her sibling.

‘Urgent obstetric assistance should have been sought due to difficulties encountered on locating the foetal heart with the transducer.

‘The Trust accepts that Eleanor could have been delivered 5-10 minutes earlier but sadly it is unlikely that this would have made a difference as Eleanor had a shortage of oxygen during labour which was then compounded by an abruption.

‘As I am sure you are aware, this was also the view of an external expert.’

The Trust has also paid a five-figure compensation settlement to Mr and Mrs Baines, the Manchester Evening News reported.

But the couple – who are also parents to Imogen, six, Lucas, three and Finley, two – said no amount of money could ever heal the pain of losing baby Eleanor.

They hope lessons will be learned from their tragedy to make twin deliveries safer for other families.

She had been in contact with the hospital to explain she was expecting twins. She said ‘things progressed very quickly’ and she was rushed to hospital by ambulance. 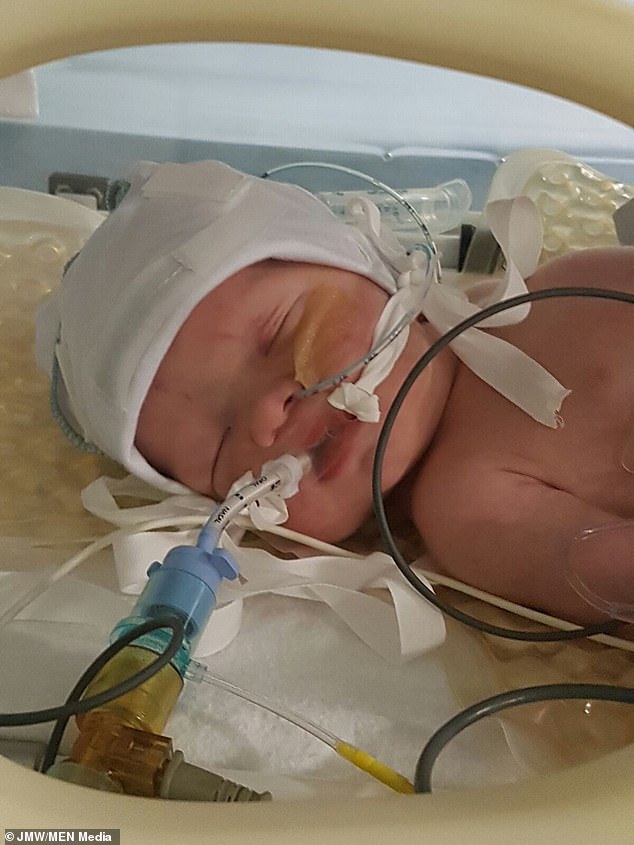 Manchester University NHS Foundation Trust, which runs the hospital, has now written to Mrs Baines and her husband Colin to apologise for mistakes made during Eleanor’s birth

Mrs Baines said: ‘I was 9cm dilated when I arrived and having been under consultant-led care throughout the pregnancy, I had expected there to be a doctor there to manage things.

‘This wasn’t the case and there seemed to be a lot of confusion with the midwives who were asking things I thought they should already know about the pregnancy.

‘It’s clear to us now that they were out of their depth and we want to highlight that this happened in a high-risk twin delivery so that we can hopefully ensure other families receive a better standard of care than we did.

‘At the time it felt like the hospital was passing the blame back to me with doctors telling me the next day that I wouldn’t keep still to be monitored and that I delayed the C-section by asking to speak to my parents.

‘The loss of Eleanor has had a lasting impact on our entire family as we struggle to come to terms with what we believe to be an avoidable tragedy.

‘Our experience has opened our eyes to truly worrying statistics in the UK around standards of care during labour, and so many deaths that could have been prevented.

‘We need to do better, and this can only happen if staff start to be more open and honest about their mistakes and are willing to learn from them.’

The Trust’s letter stated that there should have been continuous monitoring of Eleanor following the birth of her sibling.

It added that urgent obstetric assistance should have been sought ‘due to difficulties encountered on locating the foetal heart with the transducer’.

When a doctor did eventually arrive and realised the danger Eleanor was in, Mrs Baines was rushed for an emergency caesarean.

After her birth Eleanor was transferred to neonatal intensive care at St Mary’s Hospital but never managed to breathe independently.

Six days after she was delivered her parents were advised to remove her life support.

The letter from the Trust stated that even without the errors, Eleanor would have died.

But the couple’s specialist clinical negligence solicitor at law firm JMW, Jodie Miller, claims that her investigations found she would have survived.

Ms Miller said: ‘To be left with midwives who were not experienced in twin deliveries, which are complicated and high-risk, would be any woman’s worst nightmare.

‘Maternity guidelines exist for a reason, to keep mothers and babies safe, but these were not always followed.

‘This desperately sad case serves as a reminder of why it is crucial all maternity staff are fully trained and competent in the following of safety procedures.

‘Aside from the admitted failings, there were numerous other issues that occurred that contributed to this traumatic and life-changing episode and unfortunately Nicky and Colin do not feel they were taken seriously enough by the hospital.

‘This led to them taking the step of taking legal action in the first place..’

A spokesperson for Manchester University NHS Foundation Trust said: ‘We have offered our sincere condolences to the family of baby Eleanor.

‘We undertook an investigation into Eleanor’s death in 2016 and as a result we have made a number of changes to improve the safety of mothers and babies in our care.

‘We are fully committed to ensuring that lessons are learnt to continuously improve patient care.’