The Joe Politics Twitter account has sparked fury after posting a distasteful tweet about Liz Truss and the Queen – before it was forced to delete it.

The politics arm of the Joe news outlet tweeted a photo of newly-appointed Prime Minister Liz Truss meeting Her Majesty at Balmoral this week, but suggested it was the moment she had ‘poisoned’ her.

The tweet came minutes after it was announced that Her Majesty, 96, has today been placed under medical supervision at Balmoral after doctors became concerned for health.

A statement issued by Buckingham Palace said: ‘Following further evaluation this morning, The Queen’s doctors are concerned for Her Majesty’s health and have recommended she remain under medical supervision. The Queen remains comfortable and at Balmoral.’

A spokesperson has also confirmed that Prince Charles, Camilla and Prince William are travelling to Scotland to be with her.

Social media users have reacted with anger, labelling the account ‘despicable’ and calling on the page to apologise. 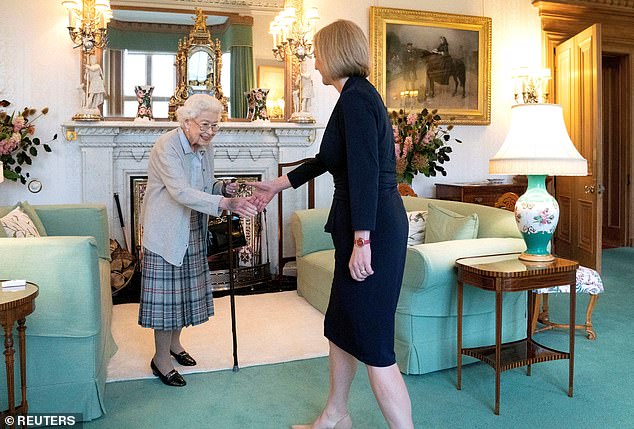 The Joe Politics page shared this picture of Liz Truss meeting the Queen at Balmoral, before suggesting it was the moment she had ‘poisoned’ the monarch

A second said: ‘Hey Politics Joe, I hope you’re going to issue an acknowledgement and an apology for this despicable tweet.’

A third added: ‘Wow, absolutely disgusting and angering. I cannot believe someone would say that about a lady who has given her entire life, unwavering to our country and been an absolute rock to everyone in times on need.

‘Sickening. You should be ashamed of yourselves.’

And a fourth added: ‘Oh you’re not getting away with this Politics Joe. This is absolutely vile, you should be ashamed of yourself!!!’

Minutes before the statement, the new Prime Minister Liz Truss was handed a note in the Commons informing her of the development as she was revealing her plans to cap energy bills for the next two years.

Ms Truss said ‘the whole country will be deeply concerned by the news from Buckingham Palace this lunchtime’ adding ‘my thoughts – and the thoughts of people across our United Kingdom – are with Her Majesty The Queen and her family at this time’. 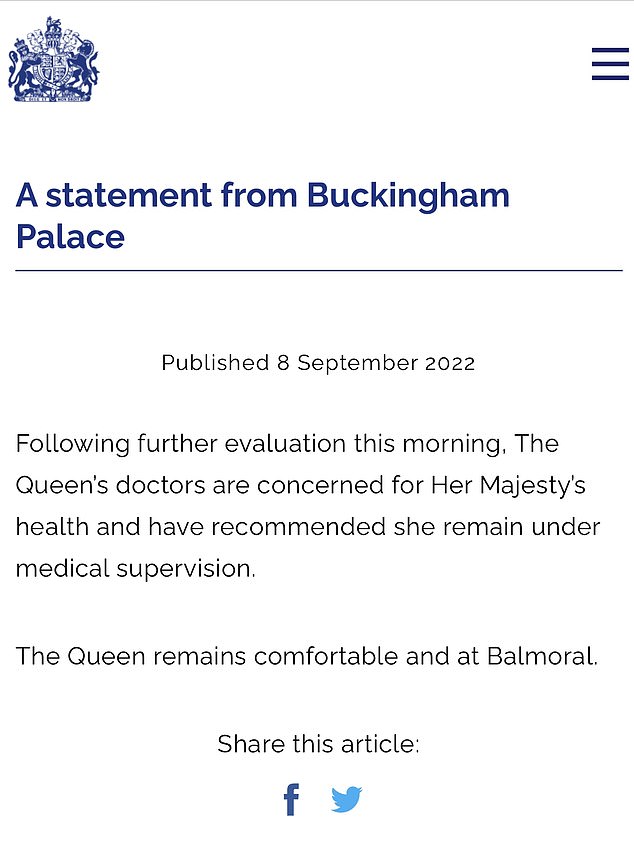 Yesterday the Queen was forced to postpone a Privy Council meeting at the last minute on doctors’ advice. Following a busy day on Tuesday, during which she greeted both Boris Johnson and Liz Truss at Balmoral, as well as undertaking other light duties, the 96-year-old monarch has been told to rest.

And today Buckingham Palace revealed that doctors have been brought to Balmoral after concerns this morning.

She had been due to hold the Privy Council virtually yesterday evening, during which the new Prime Minister would have taken her oath as First Lord of the Treasury and Cabinet ministers would have been sworn into their roles and made privy counsellors, if not already appointed as one in the past.

There had been a flurry of activity in the Commons this lunchtime as concerns about the Queen were raised to the Prime Minister. Nadhim Zahawi had handed her a note, which she read and put in