One in eight terror suspects are children: Proportion of teenagers arrested in Britain reaches highest on record during pandemic amid warnings of ‘worrying trend’

One in eight terror suspects arrested in Britain are now children, new official statistics revealed today, as a police chief warned of a ‘worrying’ trend of youngsters accessing extremist material while stuck at home during lockdown.

In the year to March, 21 under-18s were arrested for terror offences out of a total of 166 suspects across all age groups. A further 65 accused terrorists were 18 to 29, figures obtained from UK police forces showed.

This proportion of teenage terror suspects was the highest on record, and came amid a wider fall in arrests across other age groups from a peak in 2015.

White people made the largest proportion of terror suspects in the year to March 2021 – 88, versus, 49 Asians, and 10 black people. 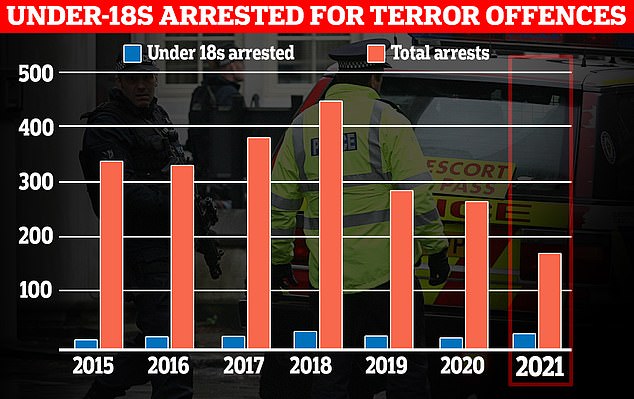 In the year to March, 21 under-18s were arrested for terror offences out of a total of 166 suspects across all age groups. This was the highest proportion in record

Whites have made up the majority of people arrested for terror offences for each of the last three years. In the 13 ones prior to that the highest proportion were Asians.

Neil Basu, the Met’s head of counter-terrorism policing, has previously warned of a ‘new and worrying’ trend of youngsters being investigated for links with the far-right violence.

He warned that the pandemic had led to more young people searching extremist materials online, and insisted that right-wing terrorism was Britain’s biggest threat.

Although the vast majority of deaths from terrorism in Britain in recent years have been at the hands of Islamist terrorists, several young people have been prosecuted for neo-Nazi plots.

In February, Britain’s youngest convicted terrorist who led a Hitler-worshipping cell from his grandmother’s cottage in rural Cornwall walked free from court after being spared jail.

The teenager, who committed a string of terror offences between the ages of 13 and 15, became the leader of the UK branch of Feuerkrieg Division (FKD) in 2019. 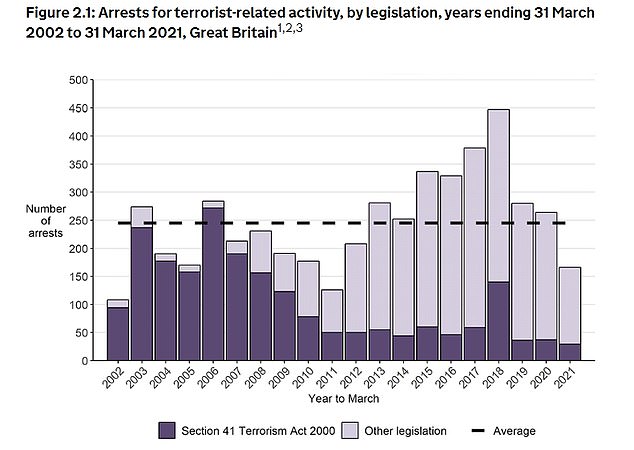 More widely, there has been a fall in arrests for terrorism offences in Britain since a peak in 2018. This graph was published by the Home Office

In February, Britain’s youngest convicted terrorist who led a Hitler-worshipping cell from his grandmother’s cottage in rural Cornwall walked free from court after being spared jail. He is seen making a Nazi salute, but can’t be identified due to his age 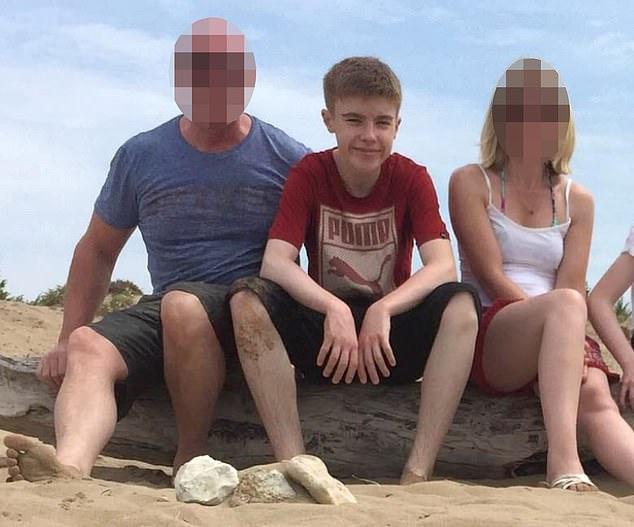 Jack Reed, was jailed after police uncovered his plans to firebomb synagogues and other buildings in the Durham area

When police raided his grandmother’s home they found a swastika flag and the extremist codes ’14 88′ – standing for ‘Heil Hitler’ painted across the garden shed.

Three terror attacks have foiled in the UK since the start of the Covid pandemic, it was revealed in March.

Counter Terrorism Policing disclosed the information as Home Office figures showed the number of arrests for terrorism-related activity fell by 34% in 2020, the lowest level in nine years.

Despite this, the number of terror plots prevented by police and the intelligence services has risen to 28 since March 2017, police said.

‘Firstly, that despite facing unprecedented challenges brought about by the pandemic, Counter Terrorism Policing continued to keep the public safe by making 185 arrests across more than 800 live investigations, stopping three possible terror attacks in the process.

‘And secondly, that while the rest of us have been focused on protecting ourselves and our families from this terrible disease, terrorists have not stopped planning attacks or radicalising vulnerable people online.’

It is not known if more attacks have been foiled to date.

He was also found with a manual containing bomb-making plans, ingredients for napalm, and instructions on how to make Molotov cocktails, build an AK47 assault rifle, and engage in knife combat.

He wrote racist and anti-Semitic posts online and spoke about ‘gassing’ Jewish people, hanging homosexuals and wanting to ‘shoot up their parades’.

Judge Mark Dennis QC told the boy he had ‘entered an online world of wicked prejudice’ and any reoffending would lead to a ‘spiral of ever-lengthening terms of incarceration’ to protect the public.

But the judge took account of his guilty plea, expression of remorse and that the teenager was ‘susceptible to the influence of others’.

In November, a 17-year-old autistic boy with far-Right views who offered to build weapons for people online was jailed for more than five years.

Paul Dunleavy, of Rugby, Warwickshire, had become a member of Feuerkrieg Division (FKD) in July 2019 and started several online conversations.

The boy expressed his extreme views in the chats and indicated he was planning or had already converted a blank firing weapon into a viable firearm.

Police found his phone had more than 90 documents on firearms, explosives and military tactics, extreme Right-wing online material and the online chats.

It came after another teenager, Jack Reed, was jailed after police uncovered his plans to firebomb synagogues and other buildings in the Durham area.

The quality surveyor’s son, then 17, grew up in a middle-class home and attended one of the best state schools in the country.

But in January 2020 he was convicted of attempting to obtain ingredients to make explosives in a twisted bid to start a ‘race war’ in his home city of Durham.

Meanwhile, January this year saw the release of Britain’s second youngest convicted terrorist from prison, a teenager from Blackburn who was 14 when he told Islamist radical Sevdet Besim, 18, to murder police officers during an Anzac Day parade in Melbourne. 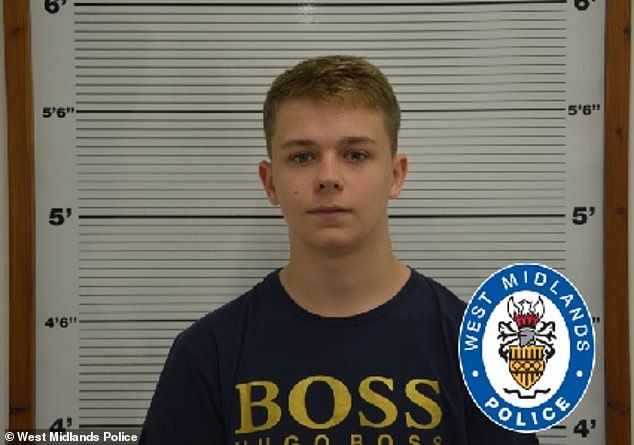 Paul Dunleavy, 17, of Rugby, became a member of the far-Right group Feuerkrieg Division