One in 20 care home residents in London has died from the coronavirus, shocking figures suggest.

Analysis of Office for National Statistics data revealed there have been 4.7 Covid-19 deaths per 100 care home beds in the capital.

London’s care sector has been hit twice as hard as the South West, East Midlands and East of England, where the rate is 1.8, 2 and 2.1, respectively.

In the North of England, the new coronavirus capital of Britain, there have been 3.2 fatalities per 100 care home beds, according to the Health Foundation.

The charity blasted the government for its too little, too late approach to care homes and say the crisis in the sector has been fuelled by ‘decades of political neglect’.

At least a quarter of the UK’s Covid-19 victims have been care home residents, ONS statistics revealed today. 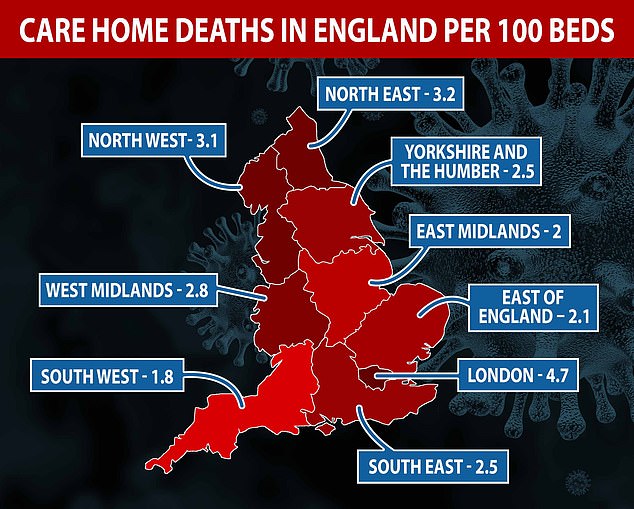 Analysis of Office for National Statistics data reveal there have been 4.7 COVID-19 deaths per 100 care home beds in London – twice as much as in the East of England and the South West 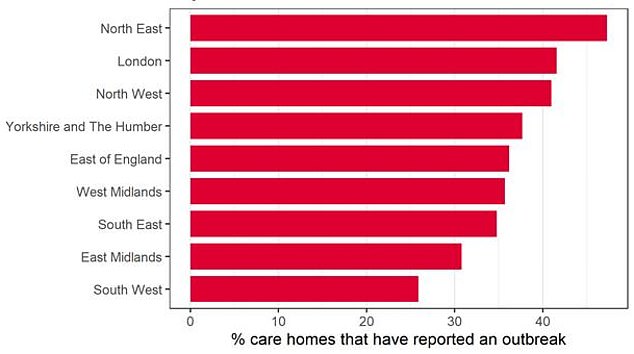 Percentage of care homes that have reported an outbreak: Every corner of England has recorded cases of the virus in more than a quarter of homes

Justice Secretary Robert Buckland sparked fury last Wednesday by admitting that ministers ‘chose’ to protect the NHS over care homes because there was not enough coronavirus testing capacity.

Mr Buckland gave the clearest statement yet that a decision was made to prioritise the health service when the outbreak was at its most ferocious.

The government has been heavily criticised for sending patients back to homes from hospitals without tests, and not putting routine screening in place for staff and residents.

Mr Buckland fuelled the row by conceding the government had to make a ‘choice’ about where to deploy testing capacity – which was languishing at a few thousand a day in early March, although it has now been ramped up to over 100,000.

‘I think we needed to make a choice about testing and we did decide to focus upon the NHS,’ he told Sky News.

‘The issue with care homes is that we’ve got many thousands of different providers, different settings, there have been lots of examples of care homes that have mercifully stayed infection free, but sadly far too many cases of infection and then death.’

Around 340 care homes have had outbreaks in the past week, with four out of every 10 in the country saying they have had cases at some point.

Looking at the cumulative deaths in care homes in England by May 1, the South East has been the worst-affected region, with 2,109 victims in its nursing homes.

There were 1,899 deaths recorded in homes in the North West, making it the second worst-hit area in the country, followed by London’s 1,654, according to ONS data.

Care home deaths in the South West (997), East Midlands (881) and North East (827) are trending towards four digits, the figures show.

The percentage of care homes that have been affected varies widely between regions, from 26 per cent in the South West to almost double (47 per cent) that in the North East.

This suggests that, while the total burden from the epidemic in terms of loss of life may have been greatest in the South East, the total spread of COVID-19 in the North East may be greater than it appears.

A relatively simple explanation for this apparent difference in the total number of deaths might be the size of the care home population within each region. 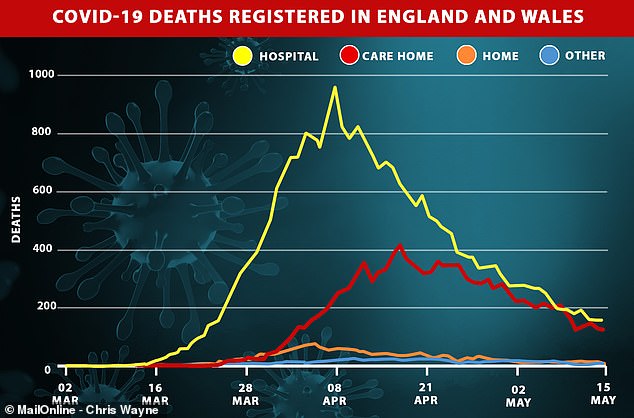 Figures collated by the Office for National Statistics show how the number of deaths in each setting spiked in April, during the peak of the Covid-19 crisis 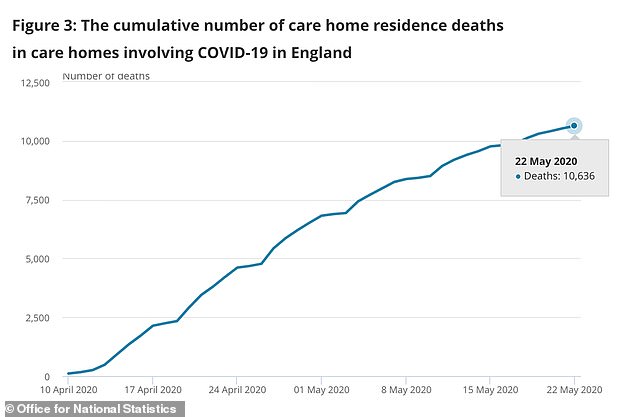 However, much like the general population in England, care home beds are not equally distributed across the country.

While around 19 per cent of care homes are in the South East, only about 6 per cent are in the North East.

Fiona Grimm, senior data analyst at the Health Foundation, said: ‘The government’s strategy for care homes stands in contrast to its approach to the NHS which has seen a more comprehensive and timely response to the pandemic.

‘But the emergency that social care now faces is also related to well-known failings in the sector, including years of inadequate funding that is putting many care providers at risk of collapse, and staff shortages linked to poor pay and conditions.

‘While no action plan could undo decades of political neglect, questions should be asked as to how many deaths could have been prevented had action been taken earlier.’

Mrs Grimm said there was an urgent need for PPE and widespread testing across the sector to save hundreds more lives.

She added: ‘The overall mortality data for care homes suggests that a government ‘action plan’ for social care, published nearly a month after the lockdown was introduced, has come too late to stem avoidable loss of life among both care home residents and staff.

‘Whilst there remains a lack of data at the national level to monitor these risks, the information we do have on deaths among residents and staff highlights the urgent need to ensure that care homes across all regions have access to adequate PPE and testing to protect both staff and residents.

‘The sector also needs urgent investment to improve the collection of data, so local and national decision makers have the information they need to effectively tackle the virus.’

The Government is under growing pressure to do more to keep the most vulnerable in society safe. Health Secretary Matt Hancock has pledged to test every care home resident and staff member in England for coronavirus by ‘early June’.

Care home providers are calling for residents and staff to be tested for coronavirus every week after research suggested asymptomatic patients were continuing to spread the disease.

Sam Monaghan, chief executive of Methodist Homes (MHA), said the crisis in the sector would continue to burn because staff are unknowingly bringing the virus into care homes.

MHA has had at least one member of staff test positive in 20 out of its 28 homes, according to results from a Government pilot of whole-home testing,