Boris Johnson urged Britons to take care at Christmas as he considers whether to tighten pandemic regulations, as government data indicated about 10 per cent of Londoners were infected with COVID-19, and daily cases hit a record for a third day.

An estimated 1 in 25 people across England – more than 2 million people – had coronavirus on December 19, according to Office for National Statistics modelling released on Friday (local time) that also showed about 1 in 10 Londoners were infected as the fast-spreading Omicron variant takes hold. 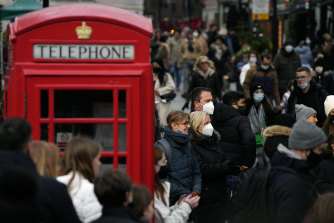 Crowds this week in Covent Garden in London. It is estimated that one in 10 Londoners have COVID-19.Credit:AP

Some 122,186 new confirmed cases were logged nationwide on Friday – a third record daily tally in a row – while minutes of a meeting of Johnson’s scientific advisers said Omicron hospitalisations are doubling every four to five days.

Johnson has already introduced new light-touch restrictions to try to limit the spread of Omicron. He’s said he won’t do more before Christmas, while warning further measures are possible after the holiday – a move that would likely anger rebels in his ruling Conservative Party.

“We must test ourselves and take extra care when meeting elderly or vulnerable relatives,” Johnson said on Friday in his Christmas message to the nation, in which he also urged people to get their vaccine boosters. “We know that things remain difficult.”

While the administrations in Scotland, Wales and Northern Ireland have already detailed new curbs that will come in after Christmas, Johnson doesn’t plan any announcements until after December 25.

But the steep rise infections will add weight to the argument of his scientific advisers, who say the sooner he clamps down on household mixing and indoor hospitality, the more he can ease pressure on the National Health Service.

“Interventions to reduce transmission that are started well before the wave of infections in older people is well underway will make a significant difference to the size of the overall peak in hospitalisations,” SAGE said in the minutes of its December 23 meeting. “Interventions after this point will be too late to make a significant difference to the number of infections, hospitalisations, or deaths.”

In more positive news, the UK Health Security Agency reported on Thursday that patients with Omicron are 50 per cent to 70 per cent less likely to be hospitalised, compared with the previously dominant Delta strain.

Still, the agency warned the highly infectious nature of the variant could lead to significant numbers of severe illness that squeeze the health service. It also said data showed that the effectiveness of booster vaccines wanes more rapidly against Omicron than Delta.

While the findings offer a “glimmer of Christmas hope,” there’s still not enough data to downgrade the level of threat, Jenny Harries, the agency’s chief executive officer, told BBC radio on Friday.

“Critically what we’re seeing is Omicron largely in young people and it’s only just now that cases are starting to tip over into the older population,” she said. “I don’t think we do know yet that this is going to be a significantly less serious disease for the older population that we’re normally most concerned about.”