The daughter of a Russian oil baron has accused her estranged father of stealing statues worth more than £4million in a series of nighttime raids on her home.

Mother-of-two Nataliya Golubovich, 26, claims Alexey Golubovich ‘systemically’ took a substantial part of a collection of 349 sculptures from her £10million London house, according to documents filed in the High Court.

It is alleged he visited the mansion in Hammersmith several times between 2012 and 2016 and used suitcases to make off with artworks.

The documents claim during one visit in November 2015 the pair got into a ‘serious argument’ about the sculptures and Mr Golubovich ‘physically assaulted’ his daughter by kicking a metal statue at her. 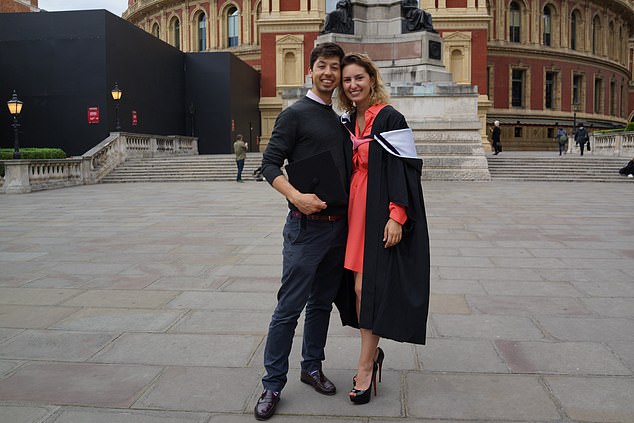 Nataliya Golubovich, 26, and her long-term partner Alex Strothe, 27, together in 2017 at her graduation from Imperial College London, where she gained a masters degree 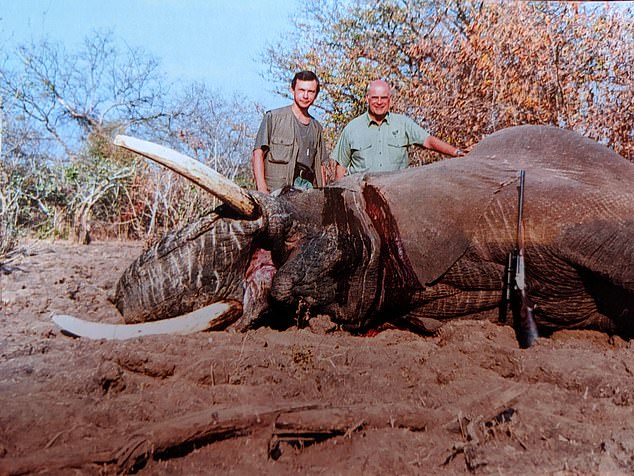 Alexey Golubovich, pictured, left on an elephant hunt is alleged to have stolen art from his estranged daughter’s home

Miss Golubovich says police were called and officers asked the businessman to leave the house.

Mr Golubovich denies all the allegations and insists official documents show there was no assault and police treated him as a ‘victim’.

It is understood the art collection includes several statues of Buddha alongside a range of rare pieces from the Far East.

It was amassed by Mr Golubovich’s ex-wife – Olga Mirimskaya to furnish the family home in London, according to the court claim.

Russian retail tycoon Miss Mirimskaya is said to have bought the artworks from sales in London, Paris, and New York, and had a personal account at auction house Christie’s.

In 2012 Mr Golubovich and his wife divorced. Within a year, the former top executive of Russian oil giant Yukos allegedly started to remove artwork.

He is said to have initially told his daughter he was taking the pieces to be restored or borrowing them to show in a museum or private gallery.

But the documents claim that later the tycoon took the items ‘in greater volume’, bringing empty suitcases with him to fill with statues and other items. 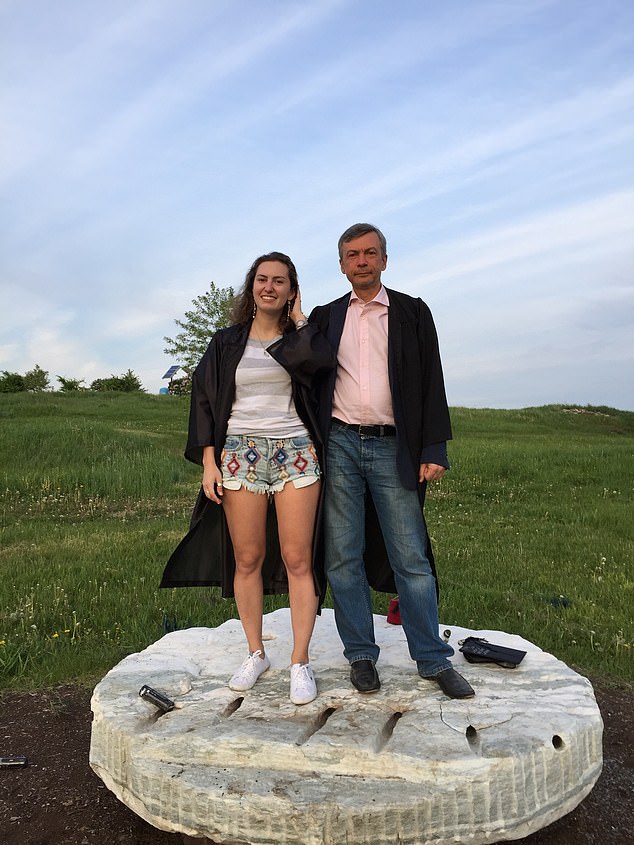 Nataliya Golubovich and Alexei Golubovich together in 2015 at her undergraduate graduation from Middlebury College, Vermont, USA

The documents, released by the High Court on Friday, say: ‘Mr Golubovich started to make night-time visits to the house with empty suitcases which he would fill with various of the missing items (together with personal items he was removing from the property).

‘During one such night-time visit, on November 15, 2015, there was a serious argument between Nataliya and Mr Golubovich about, amongst other things, the removal of the missing items, which culminated in Mr Golubovich physically assaulting Nataliya (by kicking a metal statue at her).

‘The Metropolitan Police were called and Mr Golubovich was asked to leave the house. Nataliya ultimately decided not to press charges against her father.’

Miss Golubovich, a graduate of Imperial College London, has asked the High Court to order her father to return the statues and pay damages and legal costs.

A spokesman for the tycoon said: ‘Mr Golubovich will serve a complete defence to all the claims.

‘Police were called to an argument but official documents show that Mr Golubovich was collecting his own papers from the house.

‘There was no assault. They treated Mr Golubovich as a victim and took no further action.’

According to the court documents, the oil tycoon has previously said he gained ownership of the sculptures through a ‘deed of settlement’ signed in 2013.

His daughter, whose children are aged one and two months, claims the deed is a forgery and her mother gifted her the art collection, said to be worth ‘in excess of £4.1million’, in September last year.