The President of the NSW Public Service Association has asked the state industrial commission to investigate her own union’s elections as she launches an attempt to be elected general secretary, claiming the voting has been marred by the use of members’ resources to support the incumbent leadership team.

President Kylie McKelvie is heading a ticket aiming to replace the leadership of the state’s PSA, which represents almost 39,000 public servants from the Rural Fire Service to prisons and Service NSW, in an election that closes next week. 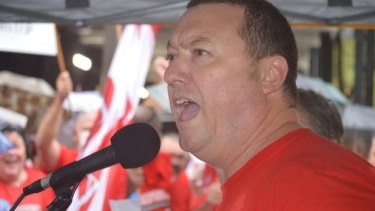 General secretary Stewart Little said he and the other union leaders running for re-election, who are organised under the banner of Rank and File, are the victims of a baseless smear campaign by Ms McKelvie’s grouping, who call themselves Members Coalition, designed to sway the election result.

At stake is control of a growing union that takes in millions in revenue each year, has a major voice in the state’s labour movement and campaigned against the Berejiklian government’s moves to restrict public service pay during the pandemic.

As general secretary, Mr Little is the union’s most senior official, responsible for managing its affairs day-to-day while the president has duties including chairing meetings, examining complaints and running the union if the secretary and deputy are absent.

Mr Little said it was possible paid union staff had asked members to vote for his ticket or made campaign materials but that he had never instructed anyone to do so and such actions would have been on their own time.

“Has an organiser said to delegates, ‘look we should vote for these guys’? Probably, but not at my direction, but I wouldn’t be surprised if they had because we’ve done a really good job,” Mr Little said.

He cited growth in the union’s membership and major industrial cases as among the union’s accomplishments under his leadership.

Legislation governing state trade unions in NSW forbids the use of union positions to “gain, directly or indirectly, an advantage for the officer or for any other person”.

Ms McKelvie’s lawyers have asked the Industrial Relations Commission of NSW to investigate whether that law has been breached and suggested a timetable where they say further evidence will be provided, but Commissioner John Murphy has not yet made formal rulings and, at a hearing last week, declined to extend or postpone voting, which ends on Wednesday.

The PSA has historically had divisions between Labor and Greens-aligned factions but both Ms McKelvie and Mr Little said their interest was in the union rather than politics and the two were elected together in 2016.

Their relationship soured over what Ms McKelvie said was a campaign to freeze her out by Mr Little and his allies, but Mr Little said it was just Ms McKelvie being uncooperative.

Mr Little has this week said he is considering defamation action against Ms McKelvie for her claims to members that he was “using PSA resources – your resources – to gain an advantage in this election”.