Two NHS medics stuck in South Africa are appealing for help getting back to the UK so they can join the NHS battle against coronavirus.

Catriona Walker, from Manchester, and Holly Watts, from Nottingham, were enjoying an extended break in the country, having travelled out in mid-January, but are desperately trying to get home so they can join the frontline effort battling Covid-19.

Ms Walker, 31, said: ‘We both feel like we need to start working, we feel bad that we’re not there working through the pandemic.

‘We’re trying to get back as soon as possible.

With their original flight home scheduled for April 14, they organised an earlier flight once it became clear that South Africa was heading for a lockdown.

When that flight was cancelled, they booked a flight for the end of the initial lockdown period – only to find that too was scrapped. 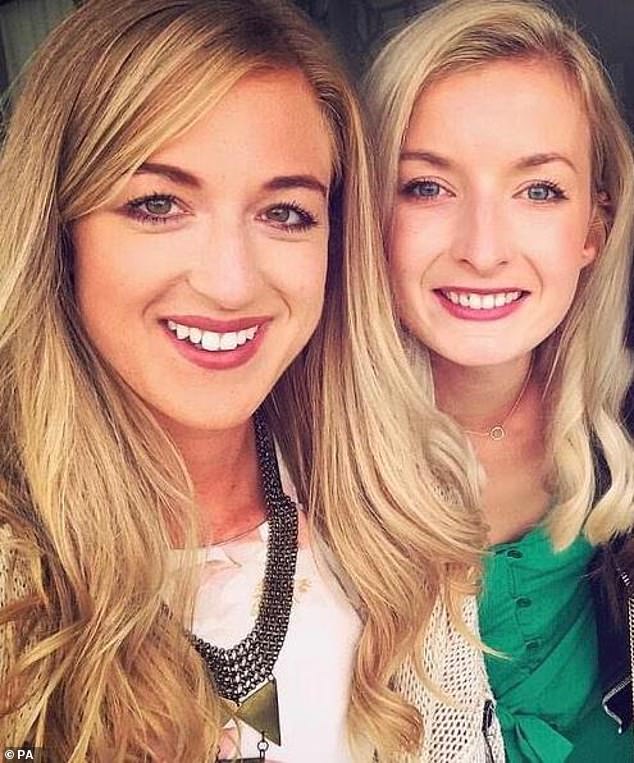 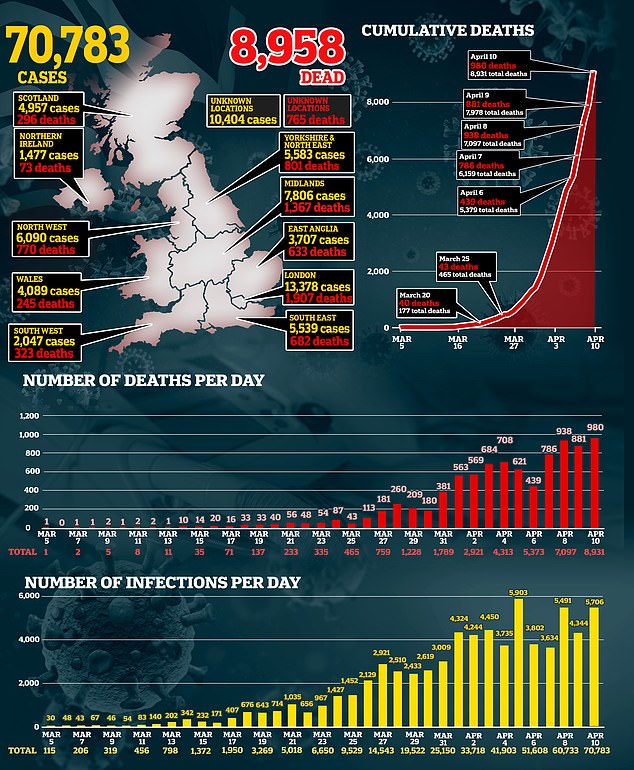 This meant they each spent around £1,200 on cancelled flights.

They now say have spent a further £660 apiece on flights organised by the British High Commission in Pretoria, and are on a waiting list for a series of three flights from Johannesburg over the next few days.

Ms Walker and Ms Watts, who are staying in Mtunzini, near Durban, face a seven-hour drive to get to Johannesburg, and – having heard reports of strict roadblocks – are concerned about whether they will be able to make it to the airport safely.

‘We don’t know if the embassy or the FCO are going to organise a coach for us,’ Ms Walker said. ‘We’ve not heard anything.

‘And you don’t find out a date apparently until 12 to 24 hours before the flight leaves.’ 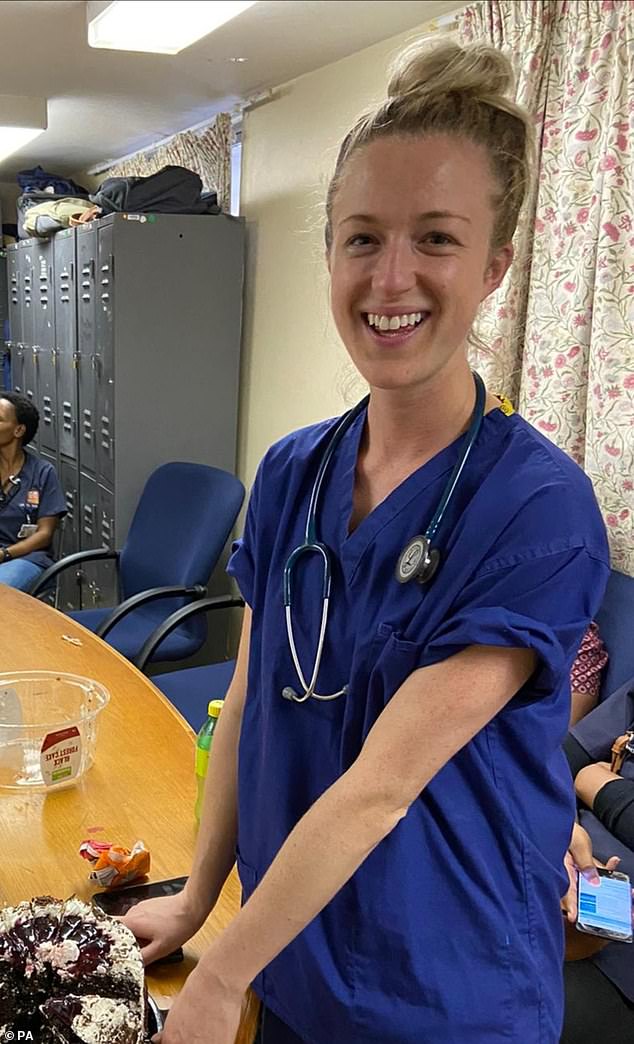 Ms Walker (pictured) and Ms Watts, who are staying in Mtunzini, near Durban, face a seven-hour drive to get to Johannesburg, and – having heard reports of strict roadblocks – are concerned about whether they will be able to make it to the airport safely

Ms Walker, who works in anaesthetics, and Ms Watts, an emergency medicine trainee, are both trained to work in intensive care, and are likely be working alongside coronavirus patients if they were back in the UK.

‘Our jobs are a vocation rather than just a job,’ Ms Walker said. ‘We both really enjoy our jobs, we feel really helpless being here.

‘I’m not saying we should get special treatment but I would have thought they’d be keen to get NHS staff back home, but that’s not the experience that we’ve had at all.’

She added: ‘We basically both feel our skills are going to waste here.’

An FCO spokesperson told MailOnline: ‘We know it’s a difficult time for many British travellers abroad – especially those with challenging circumstances.

‘Our Consular Teams are doing everything they can, especially for those in difficulty, to keep Brits informed on the latest developments and help them return – on commercial flights where they are still available or special charter flights as well.

‘We’ll continue working around the clock to bring people home.’ 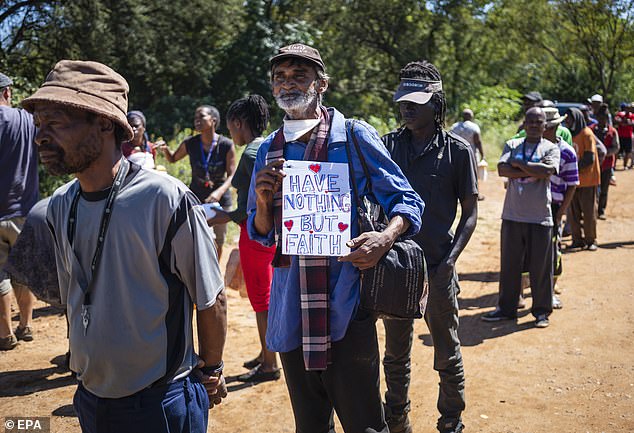 Residents of the Marikana informal settlement wait in line for food from the Volunteers for Indian Welfare Society as part of their daily feeding programme in Pretoria, South Africa 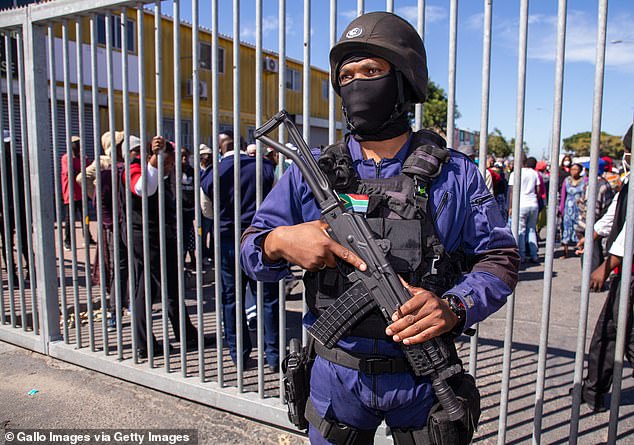 The FCO is advising that assembly points will be arranged where British national will meet and be escorted to the nearest airport.

It told UK nationals to continue to comply with the lockdown, with the exception of travelling to an assembly point before their flight.

South Africa has been on lockdown for two weeks. Shopping has been restricted to food and other essentials, while the sale of alcohol and cigarettes are banned.

Walking for exercise and mass gatherings are also banned.

Funerals are restricted to 50 people, while the Army and police have been deployed to ensure compliance in one of the world’s most despotic shutdowns.

President Cyril Ramaphosa said in a televised address on Thursday:  ‘There is sufficient evidence to show the lockdown is indeed working.

‘Unless we take these difficult measures now, unless we hold this course a little longer, the coronavirus pandemic will engulf, and ultimately consume, our country.’ 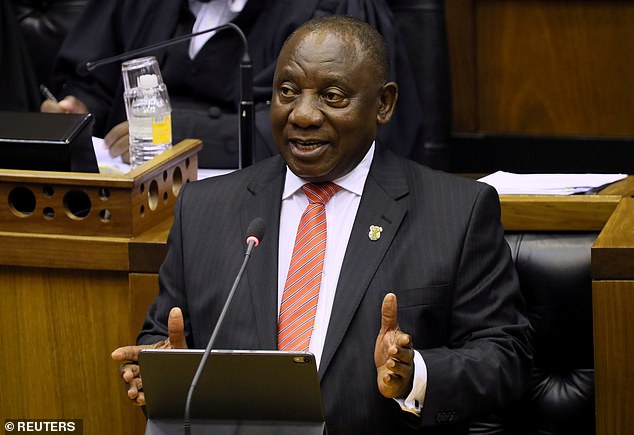 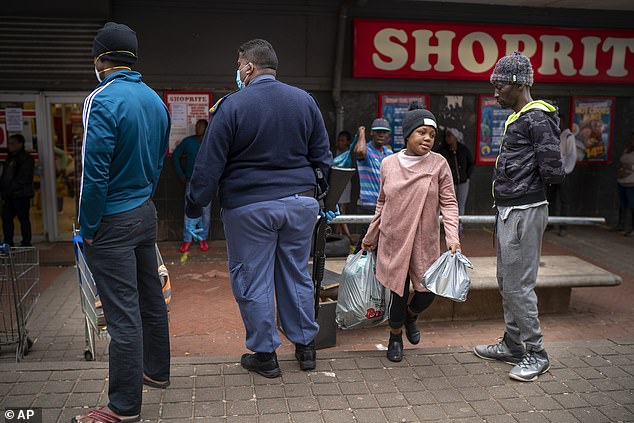 South Africa has recorded 1,934 cases of coronavirus since March 5.

The extension of the national lockdown by the Government to the end of April has been condemned by the main opposition party.

The Democratic Alliance has warned of the dire economic consequences of prolonging the shutdown, increasing the risk of poverty.

It said in a statement: ‘Each death resulting from the virus is a tragedy.

‘But so is each death resulting from caged citizens and frustrated law enforcers, and so is each victim of home violence. And each malnourished child.

‘And each newly unemployed South African.’

The head of the International Monetary Fund has warned that the coronavirus pandemic will push the world economy into the deepest recession since the 1930s Great Depression, with the world’s poorest countries suffering the most. 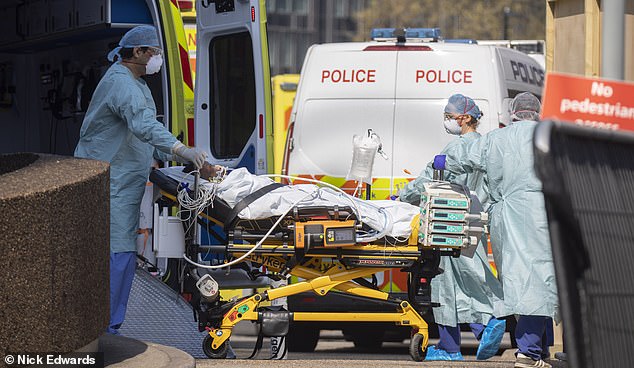 Paramedics take Patient into St Thomas’ Hospital, where the PM has stayed this week 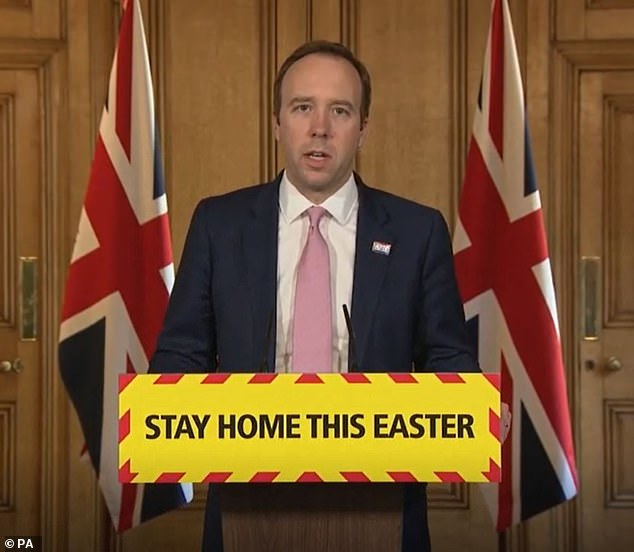 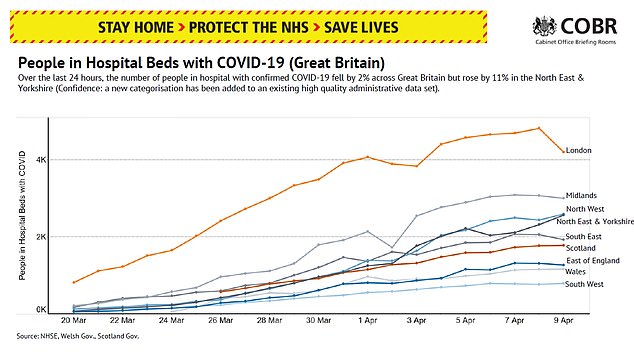 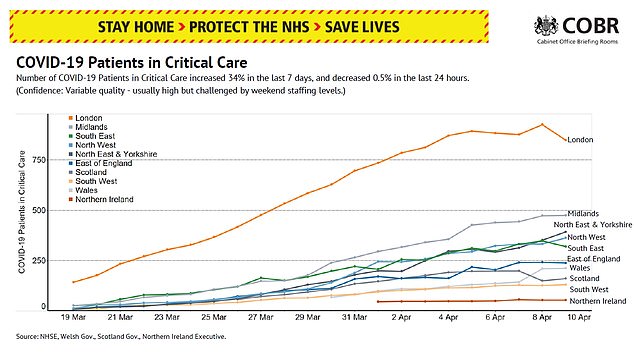 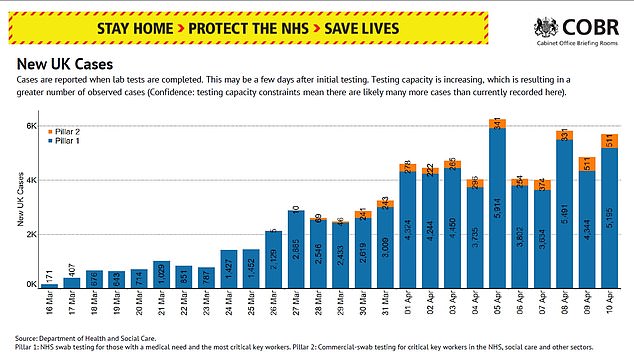 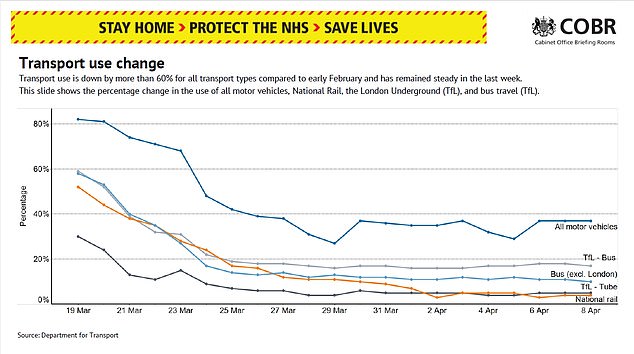 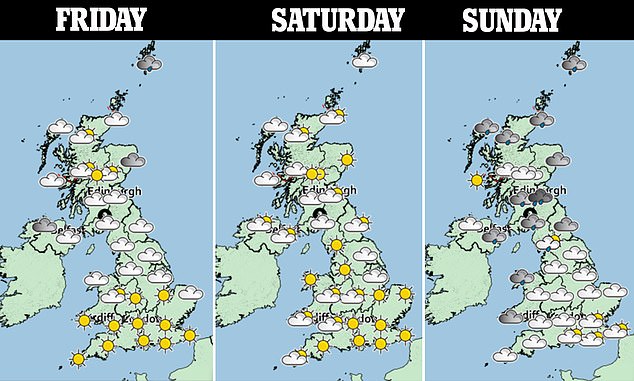 The Government is instructing the British public to stay home this Easter, as fears that scores of people will flock outdoors to enjoy 25C weather in parts of the country intensify

Their plea comes as Britain recorded another 980 deaths linked to the coronavirus in the past 24 hours, taking the total UK death toll to 8,958.

A further 5,706 people have been diagnosed with the disease in the past 24 hours, meaning a total of 70,783 have now tested positive. Officials managed a record 19,116 tests yesterday, a marked increase in its daily effort from 10,713 yesterday.

England recorded 866 new fatalities among infected patients in hospital, while another 114 were today confirmed in Scotland, Wales and Northern Ireland.

The Government is instructing the British public to stay at home for Easter, as fears that scores of people will flock outdoors for 25C weather intensify. 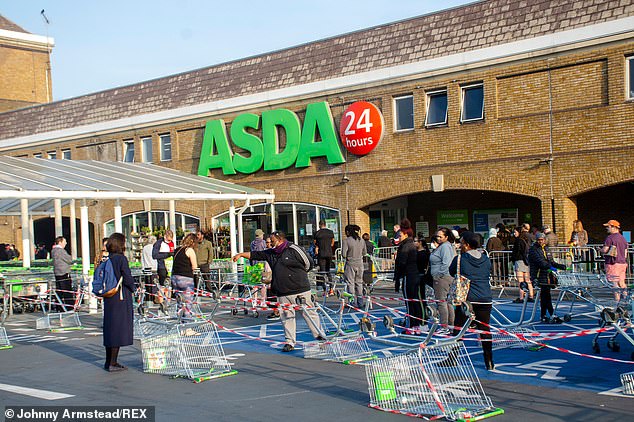 London: Queue at Asda Clapham junction snakes across and down the car park before entering a chicane of upturned shopping trollies 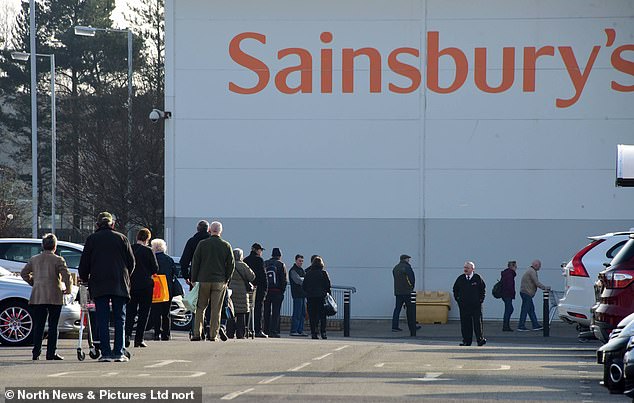 In other developments to the UK’s growing crisis today: