Last month The New York Post called President Donald Trump "an invincible hero, who not only survived every dirty trick the Democrats threw at him, but the Chinese virus as well". Then it published front-page articles trying to link the contents of a laptop said to belong to Hunter Biden to his father, Joe Biden.

On Thursday, in a sudden about-face, Rupert Murdoch's tabloid published two articles with a wildly different tone. One accused the President of making an "unfounded claim that political foes were trying to steal the election". The headline on the other described Donald Trump Jr as the "panic-stricken" author of a "clueless tweet".

In short, the President appears to be going down — and the newspaper is not about to go with him.

With Donald Trump headed toward a likely defeat, top editors at the tabloid told some staff members this week to be tougher in their coverage of him, said two Post employees who spoke on the condition of anonymity to describe internal discussions.

In addition to the shift in tone, there will be a change in personnel: Col Allan, the Australian tabloid wizard who was once seen in The Post newsroom wearing a Make America Great Again cap, will call an end to his career of more than 40 years at Murdoch papers in New York and Sydney. 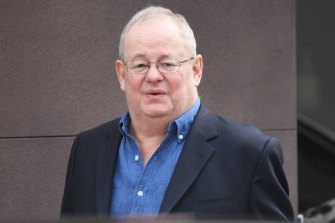 Allan, who was The Post's editor in chief from 2001-16, rejoined the paper as an adviser in January 2019, just as the presidential campaign was underway. Since his return, he has had a strong hand in shaping coverage, several staff members said. He confirmed his planned retirement in an email interview.

"The Post is not perfect," Allan said. "But it articulates a view that is not obedient to liberal orthodoxy. Therefore it is dangerous. I know where I would rather be."

On Thursday, The Post published two articles in quick succession on its website. One was a skeptical dispatch from Washington on the President's Thursday evening White House briefing: "Downcast Trump makes baseless election fraud claims in White House address," went the headline.

The article did not shy away from critical reporting: "President Trump repeated his unfounded claim that political foes were trying to steal the election from him during a briefing on Thursday evening as he trailed his opponent and remaining swing states were leaning toward a Joe Biden presidency." The full article was not included in The Post's print edition on Friday, but the parts that called the president's claims unsubstantiated were intact. 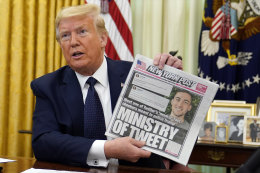 President Donald Trump holds up a copy of the New York Post as he speaks before signing an executive order aimed at curbing protections for social media giants.Credit:AP

It went online shortly after The Post published an article on its website that took aim at Trump's eldest son, who had called on the President "to go to total war over this election" in a tweet. "Panic-stricken Donald Trump Jr. calls for 'total war' in clueless tweet," read the original headline. The story noted that the younger Trump "has a long history of using Twitter to fuel conspiracy theories." (A later version of the headline removed "panic-stricken," and the article did not make the Friday print edition.)

The tenor of The Post's recent Trump coverage matched the irreverent voice the paper typically applies to Hollywood celebrities and Democratic politicians. The two employees who spoke on the condition of anonymity described instances in the last two days when top editors encouraged staff members to use a rough-and-ready tabloid voice when writing about the president. 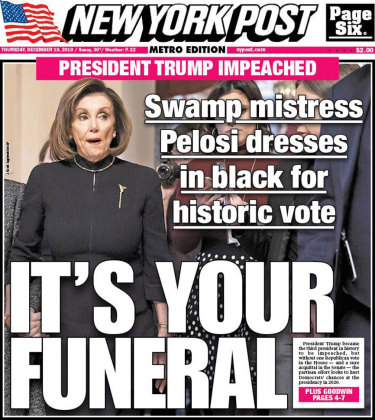 Before Election Day — as Allan worked closely with the editor in chief, Stephen Lynch, and the top digital editor, Michelle Gotthelf — The Post used its pun-crazed front page to promote the president and knock his rivals. The headlines included "HIDIN' BIDEN" (for an article on Biden's campaign strategy) and "SHE'S COUP-COUP" (on Speaker Nancy Pelosi).

Several staff members said Allan had more or less run the newsroom since his return. "I have contributed little other than some minor advice," Allan said of his work on the paper's election coverage.

Over the last year, Allan has also worked closely with columnist Miranda Devine, a fellow Australian who joined The Post in time for the 2020 campaign. She has been an ardent supporter of the president and one of Biden's fiercest detractors.

She is the one who likened Trump to "an invincible hero" as he battled COVID-19 last month. And Devine described Biden's candidacy as "an indictment of the entire Democratic establishment that has conspired to trick America into voting for someone incapable of being president".

Allan said he would split his time between Sydney and New York. Asked if he had mounted his last stand, he replied, "Like Custer!"

In the campaign's final stretch, he was a driving force behind The Post's reporting on digital data that The Post said it had obtained from a laptop belonging to Hunter Biden. The paper's first major article on the find was published on Oct. 14 amid the doubts of Post staff members. Its lead writer refused to accept a byline for his work on it.

Two main sources were Trump's lawyer, Rudy Giuliani, and his former adviser Steve Bannon. The article suggested that Joseph Biden had directed American policy in Ukraine while he was vice president to enrich his son, a former board member of Burisma Holdings, a Ukrainian energy company. Other news organisations, including The Wall Street Journal, The Washington Post and The New York Times, examined the laptop material and determined that Joseph Biden had not manipulated American foreign policy to benefit his son.

"The Post has largely supported Trump because the paper shares his vision for free markets and the opportunity they provide to raise up all people," Allan said. "We have also been critical of the president, particularly his tweeting. My personal view is that history will be very kind to Donald Trump."