Another ‘Karen’ has been caught on camera deliberately coughing over a fellow customer at a bagel shop in New York City after being called out for not wearing a face mask during the coronavirus pandemic.

The customer was picking up her order in the Manhattan bagel bar when she appeared to lose her temper after being told that she was putting other people at risk by not wearing a face covering.

The incident which happened at New York City Bagel Coffee House last week saw the woman go up to another lady who was standing in line, before deliberately coughing on her.

The woman has been identified online as Lauren Balsamo, who used to work as an assistant research coordinator at medical college Weill Cornell Medicine. 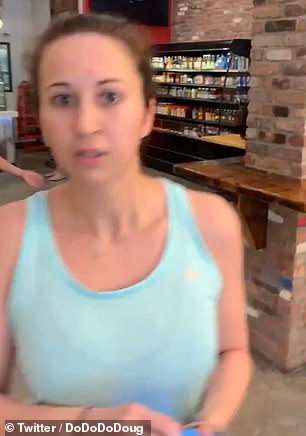 A customer was caught inside a New York bagel shop, not wearing a face mask and deliberately coughing over another customer

The on-camera meltdown began after a customer who was wearing a mask, Ally Goodbaum, suggested that a mandatory ‘mask-on’ policy be introduced to all patrons entering the store.

As soon as the woman overheard the complaint, she began attacking Goodbaum at first verbally and then physically.

‘You can’t say it to my face you p****?’ she asked before walking straight up to Goodbaum and coughing in her face.

‘What the f*** is wrong with you?’ Goodbaum cried.

Incredibly, the workers in the store still served the abusive woman her drinks and food before she walked out the store.

On Saturday afternoon, the coughing culprit was identified as Lauren Balsamo who worked at Weill Cornell Medicine until January of this year.

The college confirmed her identity in a post on social media and were quick to distance themselves from their former employee in a statement. 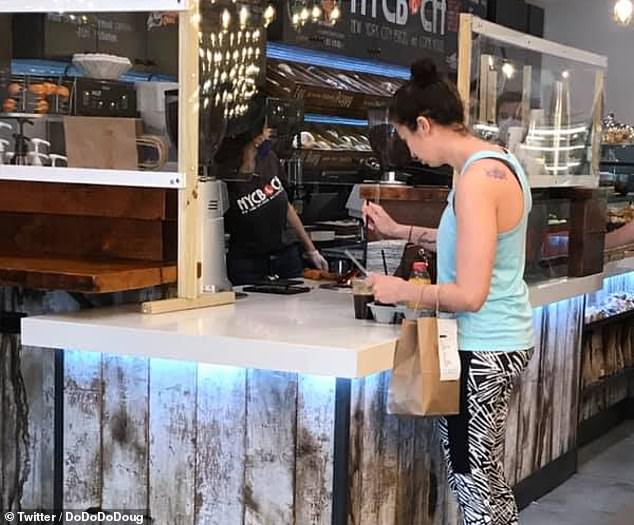 The woman, pictured, began hurling verbal insults before walking over to cough in her face 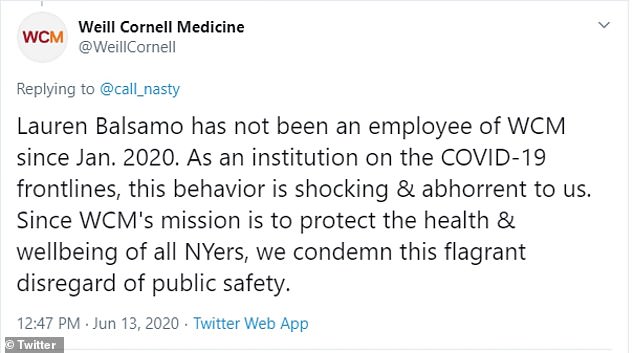 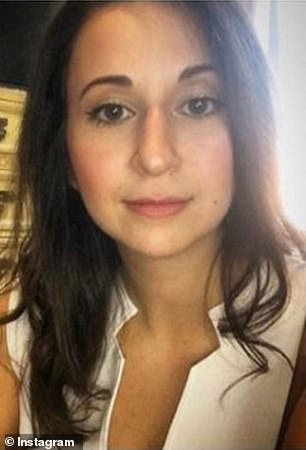 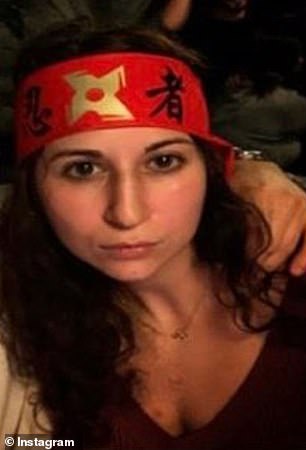 In a statement on Instagram, the college wrote: ‘Weill Cornell Medicine condemns the actions recently exhibited by a former employee in a video circulating on social media.’

In a similar statement on Twitter, they wrote: ‘Lauren Balsamo has not been an employee of WCM since January 2020. As an institution on the COVID-19 frontlines, this behavior is shocking & abhorrent to us. Since WCM’s mission is to protect the health & wellbeing of all NYers, we condemn this flagrant disregard of public safety.’

In a lengthy Facebook posting, Goodman explained in her own words what happened and how she was shocked at how the encounter unfolded.

‘Words truly cannot express my disappointment in humanity these days. I know there are bigger problems in the nation right now but more and more it seems the people who are just trying to standup for the right things are getting bulldozed by bullies. 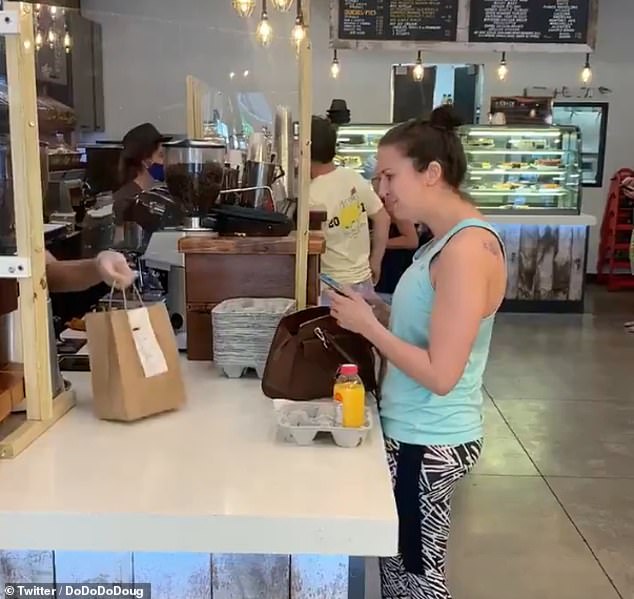 A fellow patron asked staff in store why they didn’t insist on masks for everyone which incensed the woman, pictured 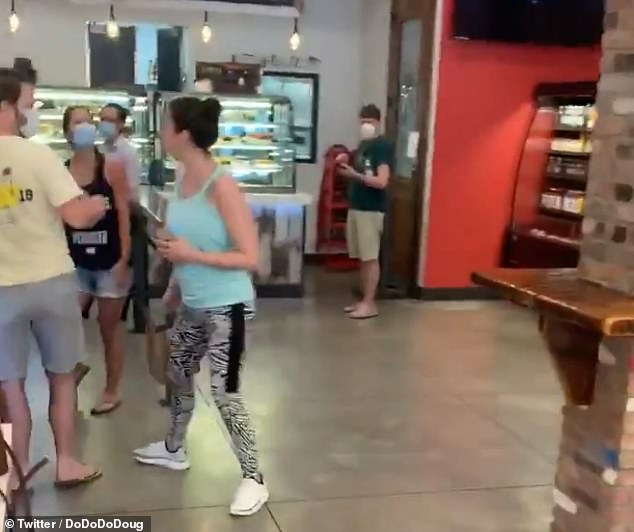 ‘I was at New York City Bagel Coffee House on Broadway and 30th Street getting my bagel and noticed a patron who was coughing, not covering her mouth, and not wearing a mask. I politely pointed this out to the woman working at the store and told her that the store should enforce masks to worn by patrons while inside the store.

‘The unmasked patron overheard my complaint and became enraged yelling at me calling me names claiming she has covid antibodies and doesn’t need to wear a mask in public so I should mind my own F’ing business. She then proceeded to come towards me and repeatedly cough on me as seen in this video.

‘I share this to say please choose kindness in these situations. Look out for one another like patrons who took this video and asked if I was okay.

‘Tomorrow is a new day- lookout for everyone in your community and please choose peace and kindness.’ 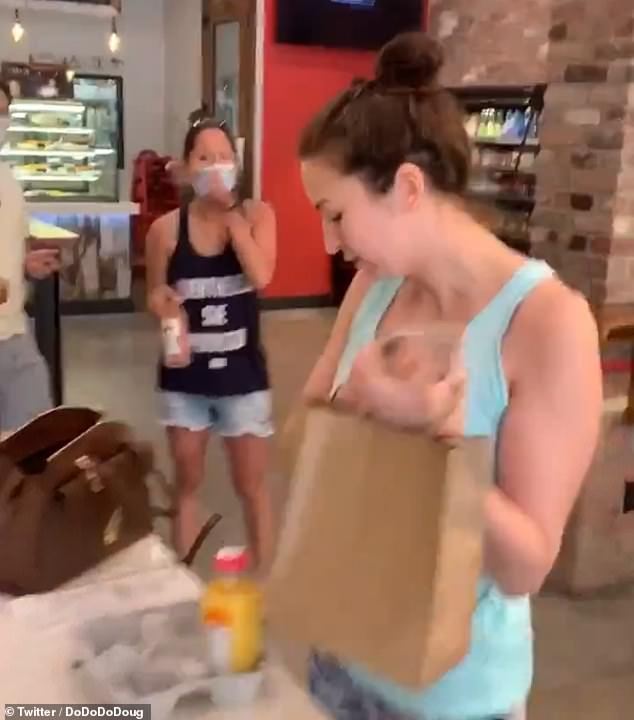 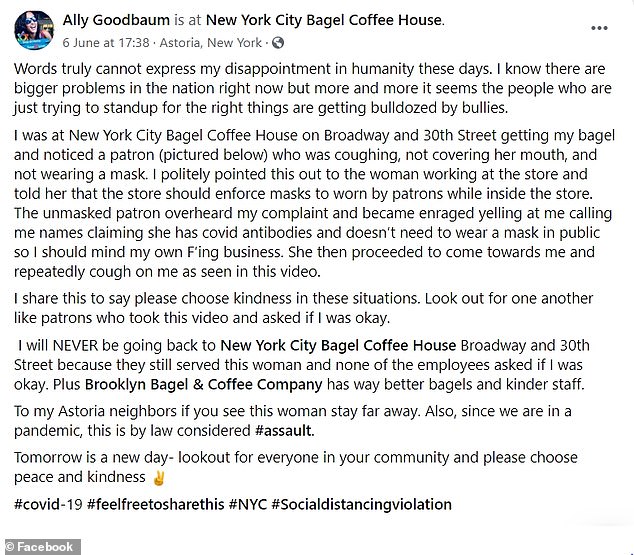 The woman who was coughed over, Ally Goodbaum ended up documenting the incident online