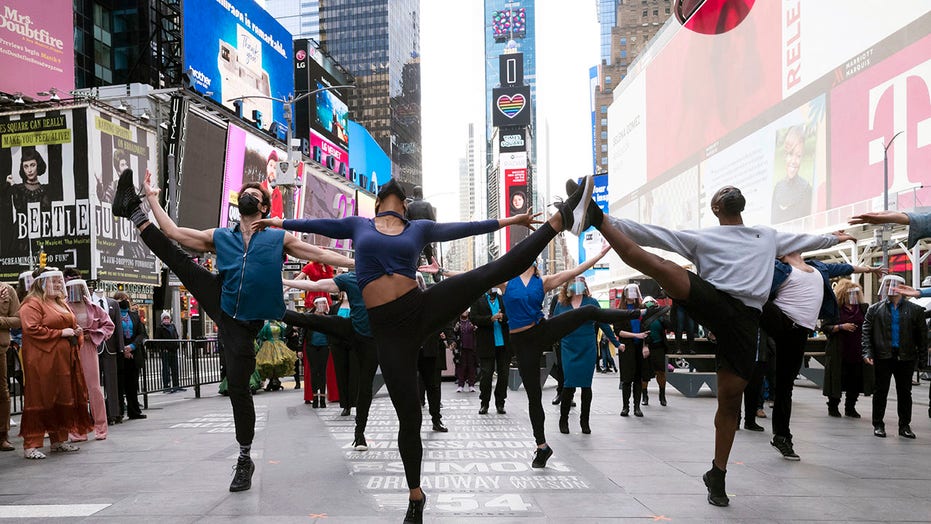 More than a year after coronavirus shutdowns sent “the city that never sleeps” into a fitful slumber, New York could be wide awake again this summer.

Starting Wednesday, vaccinated New Yorkers can shed their masks in most situations, and restaurants, stores, gyms and many other businesses can go back to full capacity if they check vaccination cards or apps for proof that all patrons have been inoculated.

Officials say now is New York’s moment to shake off the image of a city brought to its knees by the virus last spring — a recovery poignantly rendered on the latest cover of The New Yorker magazine. It shows a giant door part-open to the city skyline, letting in a ray of light.

Is the Big Apple back to its old, brash self? 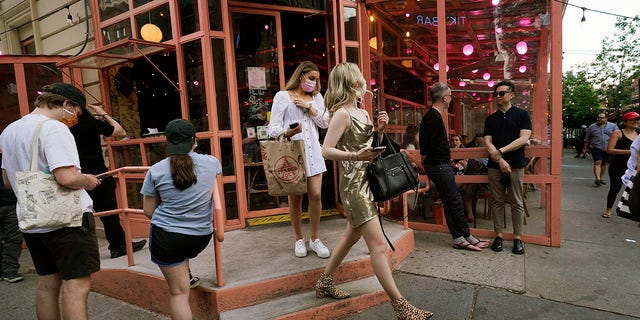 Patrons leave as others wait for a table at Tiki Bar on Manhattan’s Upper West Side, Monday, May 17, 2021, in New York. Although the week was just beginning, the popular Upper West Side corner bar and restaurant was hopping Monday, perhaps in anticipation of Wednesday, when vaccinated New Yorkers will be able to shed their masks in most situations. Restaurants, shops, gyms and many other businesses can go back to full occupancy if all patrons are inoculated. (AP Photo/Kathy Willens)

Last spring, the biggest city in America was also the nation’s deadliest coronavirus hotspot, the site of over 21,000 deaths in just two months. Black and Hispanic patients have died at markedly higher rates than Whites and Asian Americans.

Hospitals overflowed with patients and corpses. Refrigerated trailers served as temporary morgues, and tents were set up in Central Park as a COVID-19 ward. New York’s hectic streets fell quiet, save for ambulance sirens and nightly bursts of cheering from apartment windows for health care workers.

After a year of ebbs, surges, reopenings and closings, the city hopes vaccinations are turning the tide for good. About 47% of residents have had at least one dose so far. Deaths have amounted to about two dozen a day in recent weeks, and new cases and hospitalizations have plummeted from a wintertime wave. 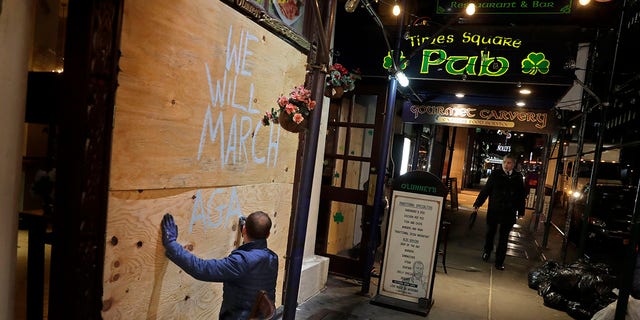 FILE – The manager of O’Lunney’s Times Square Pub, John Galgey, writes "We Will March Again!" on the plywood he used to board up the large glass windows of the pub in New York, Monday, March 16, 2020. More than a year after coronavirus shutdowns sent "the city that never sleeps" into a fitful slumber, New York could soon be wide awake again. Vaccinated New Yorkers can shed their masks in most situations Wednesday, and restaurants, shops, gyms and many other businesses can go back to full occupancy if all patrons are inoculated. (AP Photo/Seth Wenig, File)

Large swaths of the country and world are also starting to get back to normal after a crisis blamed for 3.4 million deaths globally, including more than 587,000 in the U.S.

Las Vegas casinos are returning to 100% capacity and no social distancing requirements. Disneyland in California opened up late last month after being shuttered for more than 400 days. Massachusetts this week announced that all virus restrictions will expire Memorial Day weekend.

Summer music festivals like Lollapalooza are back on, the Indy 500 is bracing for more than 100,000 fans, and the federal government says fully vaccinated adults no longer need to wear masks.

France is opening back up on Wednesday as well, with the Eiffel Tower, Parisian cafes and cinemas and the Louvre bringing back visitors for the first time in months.

In New York, Mayor Bill de Blasio has declared it the “summer of New York City.” 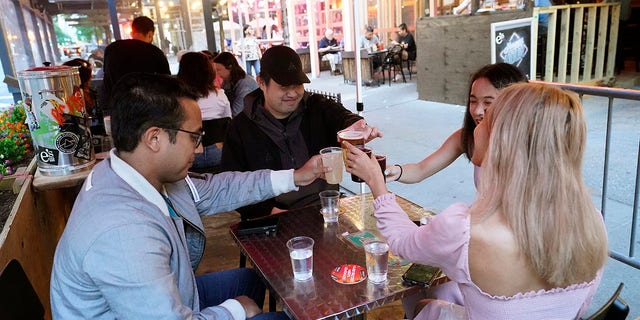 Patrons at e’s Bar on Manhattan’s Upper West Side, share a toast, Monday, May 17, 2021, in New York. "We feel the energy" of social life gearing back up," co-owner Erin Bellard said. "People are so excited to be out." Vaccinated New Yorkers can shed their masks in most situations Wednesday, and restaurants, shops, gyms and many other businesses can go back to full occupancy if all patrons are inoculated. (AP Photo/Kathy Willens)

There are other signs New York is regaining its bustle. Some 80,000 city employees returned to their offices at least part time this month, joining the many municipal workers whose jobs never were done remotely.

Subway and commuter rail ridership is averaging about 40% of normal after plunging to 10% last spring, when the subway system began closing for several hours overnight for the first time in its more than 115-year history.

Shakeem Brown, an artist and delivery person who works late in Manhattan, spent up to three hours a night commuting back to his Queens apartment before 24/7 service resumed Monday. Brown, 26, said it’s “refreshing” to see things opening up.

At e’s Bar on Manhattan’s Upper West Side, “we feel the energy” of social life ramping up, co-owner Erin Bellard said. “People are so excited to be out.” 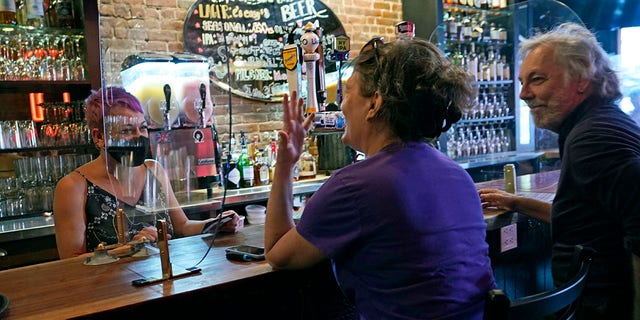 e’s Bar co-owner Erin Ballard, left, talks to regulars Julie and Steve Ross at the bar on Manhattan’s Upper West Side, Monday, May 17, 2021, in New York. The Ross’s said they’re "veterans, part of the family." "We discovered them during the pandemic in 24 degree-weather, while we were still wearing sweaters, mittens and long underwear. It’s been a little oasis of sanity," said Steve Ross, right. "We feel the energy" of social life gearing back up," Bellard said. "People are so excited to be out." (AP Photo/Kathy Willens)

Still, receipts at the bar and grill have been down about 35% because of pandemic restrictions on hours and capacity, she said. The impending end of the midnight curfew will give the bar two more crucial hours, and the owners are planning to survey patrons to determine whether to regain full capacity by requiring vaccinations.

From other vantage points, “normal” looks farther off.

The sidewalks and skyscrapers of midtown Manhattan, for instance, are still noticeably empty. Big corporate employers largely aren’t looking to bring more workers back until fall, and only if they feel it’s safe, said Kathryn Wylde, CEO of the Partnership for New York City, a major employers group.

“Shutting down was easy. Reopening is hard,” Wylde said after a meeting last week with a group of CEOs. “All the employers say that there still is fear and some resistance to coming back.” 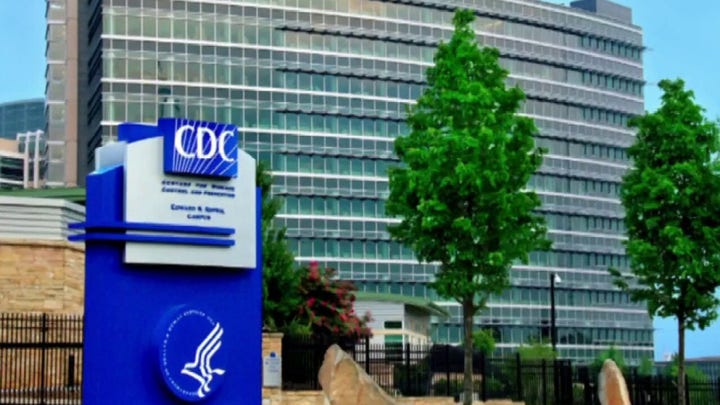 Besides virus fears, companies and workers are wondering about safety, she said.

Crime in the city has become a growing source of concern, but it’s a complicated picture. Murders, shootings, felony assaults and auto thefts rose in the first four months of this year compared with the same period in pre-pandemic 2019, but robberies and grand larcenies fell. So did crime in the transit system, probably because of the drop in ridership.

Brandon Goldgrub has been back at his midtown office since July, but it’s just in the last few weeks that he has noticed the sidewalks seem a bit crowded again.

Visiting from Tallahassee, Florida, Jessica Souva looked around midtown and felt hopeful about the city where she used to live.

“All we heard, elsewhere in the country, was that New York was a ghost town, and this doesn’t feel like that,” said Souva, 47. “It feels like a city in transition.”