When the roar of an ex-military aircraft jet engine fires up on the back of a small boat on Blowering Dam on Saturday, history will be repeating itself.

David Warby is in the final stage of trials to snatch the world water speed record from his father Ken Warby, which was set on the same stretch of water near Tumut in the foothills of the Snowy Mountains on October 8, 1978. 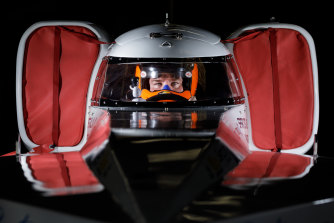 Ken Warby's boat, now suspended from the roof in the Australian National Maritime Museum, clocked up an average speed of 511 kilometres an hour (317 miles per hour) over one kilometre. Not bad for a largely self-funded boat built from a $100 jet engine from a RAAF Lockheed Neptune reconnaissance plane. He scratched together other parts and assembled the boat in his backyard with three power tools.

His hero was Donald Campbell, who as holder of the world water speed record added the world land speed record to his achievements by driving his car at over 400 miles per hour across Kati Thanda-Lake Eyre in South Australia in 1964. Campbell died in 1967 attempting to break his own water speed record on Coniston Water in the Lake District in England.

As a child, David Warby watched his father's boat being built over the years and learned a great deal. Now it's his turn – and Dad doesn't seem to mind one bit.

The latest attempt is also being run on a shoestring budget, but has some sponsorship and has been built under cover in a workshop in Newcastle – with his Dad's help. Ken Warby, who lives in Ohio in the United States after settling there to race jet cars, would fly in occasionally to lend a hand. 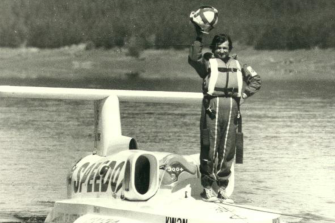 Ken Warby on the water for his water speed record.

This time the jet is a $50,000 Rolls Royce Orpheus engine from an Italian jet fighter Fiat G91.

On Saturday the boat will be put through speed trials after some minor modifications. "The last time we ran the boat we got to about 400kmh and we found the back of the boat was a bit twitchy," Warby said. 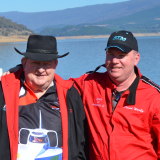 David Warby with his father Ken.

"We have had Newcastle University do some computer wind tunnelling on the boat so now we are going to put the theory into practice and move on from 400kmh.

"We are approaching it the same way my father did. He gradually increased the boat speed, you analyse the boat then you make the changes that you need. I know every nut and bolt in the boat."

Some of the support team who helped Ken Warby in their teens are helping David Warby in their 50s. The crew chief has 6000 hours in fighter jets and was a squadron leader of F/A-18s.

If things go well at the weekend trials the record attempt will be on the horizon.

"I will have to call in the Guinness Book of Records, there's a lot of preparation," Warby said.

And will Dad be there to witness the record-breaking attempt if the trials go well?

"He couldn't be any prouder of what we are doing," Warby said. "He says: 'You don't have to break the record, you have already done me proud'.

"He'll come over from the states, definitely. He's now 82 but he will come over with a few of his friends who want to watch when it happens."

"We will go faster [at the weekend] than we did before, we always do. Anyone can say just go out and floor it and go for the record but there's plenty of dead people that have tried that." 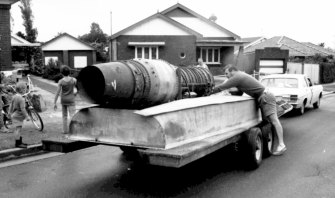 Ken Warby with a jet engine as he prepared his record attempt.