Nearly two out of three importers are suffering hold-ups of at least two days getting goods in the UK, according to a survey of 350 supply chain bosses.

A new report warns the delays since the start of this year will result in post-Brexit stock shortages and price hikes for consumers.

The delays are being caused by the time taken for customs officials to work through new post-Brexit paperwork, said the Chartered Institute of Procurement & Supply (CIPS).

The situation is only slightly better for exports, with 44 per cent experiencing delays of at least two to three days getting goods into the EU, said the report. 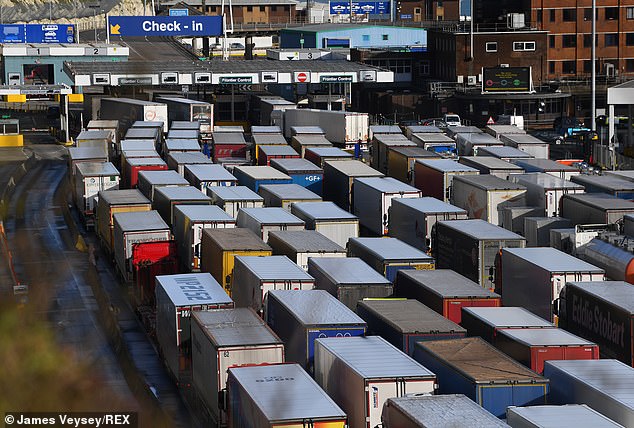 A new report warns the delays since the start of this year will result in post-Brexit stock shortages and price hikes for consumers (pictured: cargo trucks in Dover last month)

The CIPS said it has evidence of drivers being turned away at or before the border for not having the correct paperwork.

The delays come despite the fact that many new import certifications are still yet to come into force, said the report.

John Glen, of the CIPS, said: ‘We are well into the second month of the new arrangements and the hope that delays at the border would reduce as freight volumes returned to normal and customs systems became used to the new processes has not come to pass.

‘What is even more concerning is that the delays are continuing to get longer, putting more and more pressure on the UK’s supply chains and affecting the timely delivery of much-needed goods.

‘The paperwork required at the border is not going to change any time soon, so we should brace ourselves for these delays to continue for at least the next few months.

‘New requirements for import certifications are also rapidly approaching and these will only add to the paperwork required, causing further delays for businesses.

‘The knock-on impact of these delays will trickle far down the supply chain and ultimately result in stock shortages and inflated prices for consumers.’ 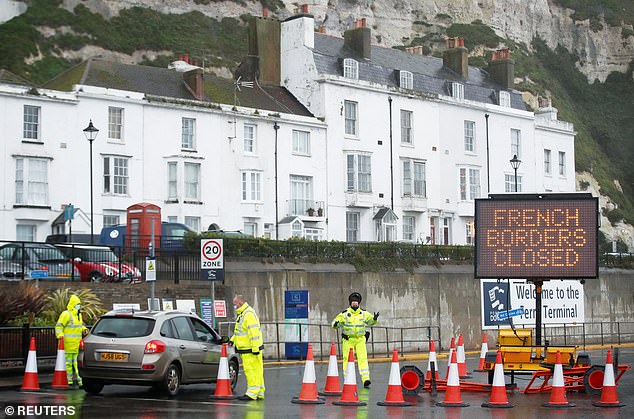 Security officers pictured standing guard an an entrance to the Port of Dover in December last year, when EU countries imposed a travel bank from the UK amid the Covid-19 outbreak 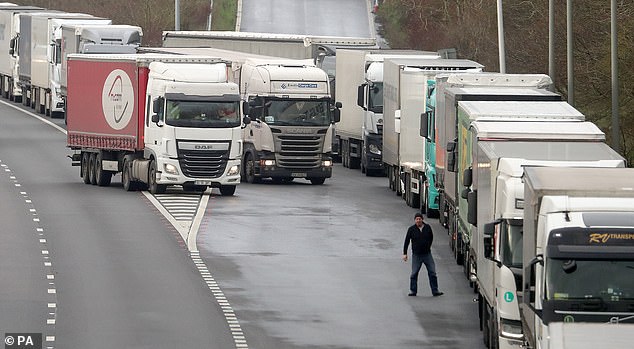 A lorry driver views the queue of lorries on the M20 as lorries wait to enter the Eurotunnel site in Folkestone, Kent, due to heavy freight traffic in December last year

Northern Ireland remains part of the EU’s single market for goods. Food products entering from the rest of the UK must undergo EU import checks, and products of animal origin need vet certificates.

Supermarkets have been given a grace period until April where they do not need the certificates for most products and businesses, and British ministers want an extension.

Mr Connolly, who represents companies such as Lidl, Asda and Sainsbury’s, said: ‘It has to lead to certainty, not just for Northern Irish businesses but for those people who want to invest in Northern Ireland.’

The British Government is pressing the EU for an extension to grace periods on checks on supermarket goods in transit from the rest of the UK to Northern Ireland until 2023.