Nearly one in four UK firms have halted trading due to coronavirus lockdown, new figures show

Nearly one in four UK firms have halted trading due to the coronavirus lockdown, new figures show.

The ONS said 23 per cent of businesses have temporarily closed or paused trading, according to its latest survey on the business impact of coronavirus, for the two weeks to April 19.

The figures are particularly bleak for the accommodation and service sector where four out of five – 81 per cent – of businesses have halted operations.

The next worse hit is the arts and entertainment sector which has seen 80 per cent cease trading.

The grim survey findings come on the same day the Bank of England warned the economy could shrink by nearly 30 per cent in the first half of this year. 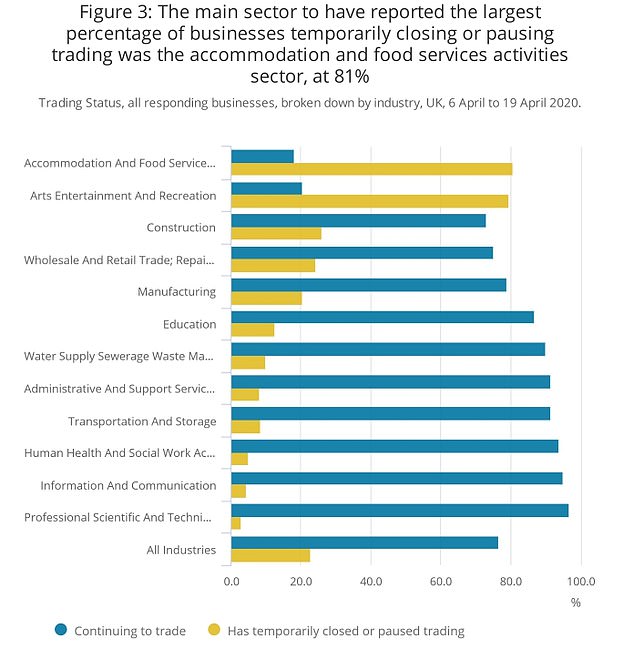 The latest ONS figures show the sectors that have reported the largest percentages of businesses closing are in the food service industry, arts and entertainment and construction 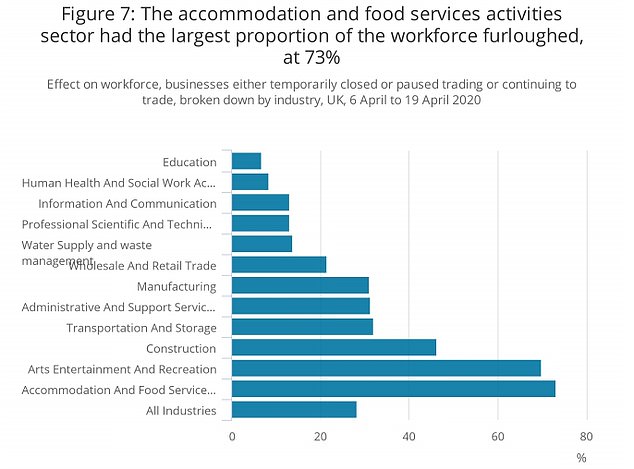 This figure shows that the food service sector, arts sector and construction industry has the largest level of employees furloughed 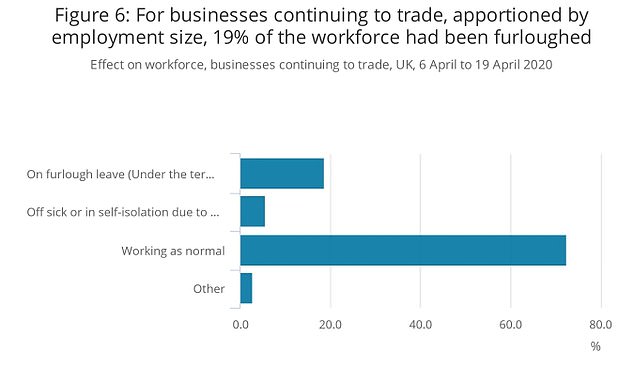 This figure indicates that for businesses still trading, 19 per cent of the workforce has been furloughed

The impact of the deadly disease will continue to be felt long afterwards and unemployment could hit 9 per cent before falling back again.

Most businesses across all sectors have continued to trade, but most of these reported a slump in turnover.

The survey also revealed that 58 per cent of companies said turnover had slipped below normal levels.

Of those that had not closed sites, 30 per cent said their financial performance was not impacted.

Two-thirds of companies, in the survey of 6,114 firms, said they have furloughed staff through the coronavirus job retention scheme.

These firms said they have furloughed around 28% of their workforces to mitigate the impact of the crisis. 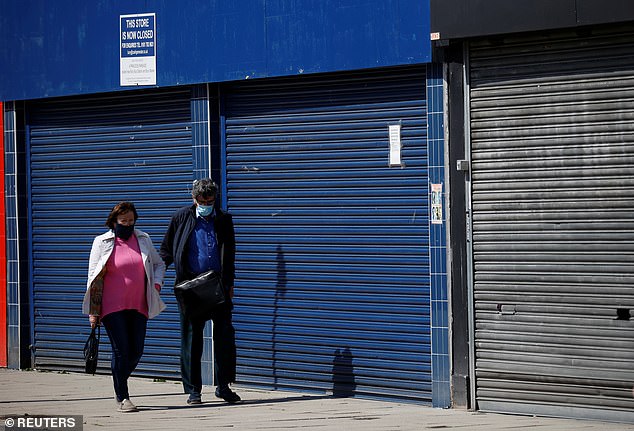 The survey said 87% of accommodation and food service companies have furloughed staff, along with 81% of construction firms and 77% of transport outfits.

The ONS also revealed that the price of high-demand products has nudged 0.1% lower, after price rises in previous weeks.

The dire economic pronouncements today come as Boris Johnson is expected to begin loosening some of the strict lockdown measures he imposed on March 23.

The PM will address the nation on Sunday evening, at 7pm, to unveil the ‘roadmap’ of how the country will look in the months to come.

It is expected that  curbs on outdoor activities set to be eased and businesses encouraged to find ways to get back up and running amid social distancing rules.

Kickstarting the economy  and getting Britain back to work will be of a particular concern to Chancellor Rishi Sunak after today’s dire numbers from the Bank of England that would put the UK in the worst recession for three centuries. 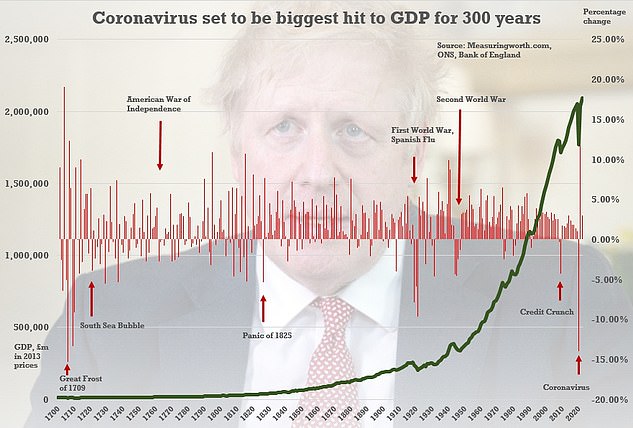 The overall 14 per cent fall in output estimated for 2020 would be the biggest recession for more than 300 years – since 1709 when the Great Frost brought fledgling economies grinding to a halt across Europe.

The Bank says it believes there was a 3 per cent contraction in the first quarter, and sees GDP plummeting by an incredible 25 per cent in the current three month period, before finally clawing back some ground.

Announcing that interest rates have been kept on hold at a record low of 0.1 per cent, Governor Andrew Bailey said it was acting to ease the effects as much as possible and tried to strike a more optimistic tone by saying there would be limited economic ‘scarring’.

But in another bleak sign this morning, former Chancellor Alistair Darling warned that the Bank might be too optimistic about the prospects for a quick recovery.