Chilling moment murderer, 23, is seen casually strolling around garage with the friend, 24, he hacked to death in ‘unprovoked machete attack’ in his flat hours later – as he’s jailed for life

This is the chilling moment two friends casually wandered around a petrol station just hours before one would savagely hack the other to death with a ‘machete’ in an ‘unprovoked’ attack.

Ross Miller is facing life in prison after he was found guilty of killing his friend Brandon Lee.

The murderer chopped and slashed his victim 60 times using a bladed weapon, leaving his flat looking like a ‘bloodbath’.

Miller inflicted horrific injuries on Mr Lee, with a large number of them on his face and head, before calling police to tell them he had killed a man.

Footage shows the pair together in a vehicle outside a garage in South Shields where Miller went inside to purchase cigarettes.

Police released the CCTV footage after Miller, 23, was convicted of murdering Mr Lee, 24, of Jarrow, after a trial at Newcastle Crown Court.

Miller, of Victoria Road, South Shields, was handed a life sentence for murdering Mr Lee at Miller’s flat in May. 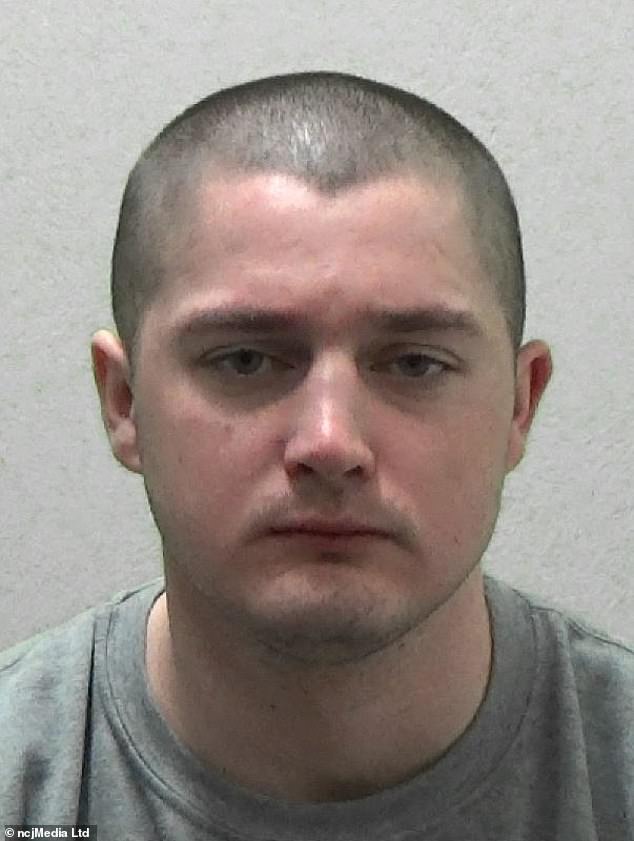 Ross Miller, of Victoria Road, South Shields, is facing a life sentence for brutally murdering his friend Brandon Lee at Miller’s flat in May, leaving the place looking like a ‘bloodbath’

When police turned up, they found Mr Lee’s topless body slumped forward on the floor with more than 100 injuries, while 23-year-old Miller was covered in blood and sitting on the sofa starting straight ahead and not moving.

Jurors heard Miller, who had a drink problem, had previously exhibited a vicious temper and an interest in machetes and knives.

The court heard Miller inflicted 60 separate actions from a sharp-edged weapon, such as a machete, including ‘chopping, stabbing and potentially slashing’.

The murder took place during a night of socialising at Miller’s flat on Victoria Road, South Shields, in the early hours of Tuesday May 12.

Miller and Mr Lee had known each other through a group of friends some years ago and had recently got back in touch via an online game. 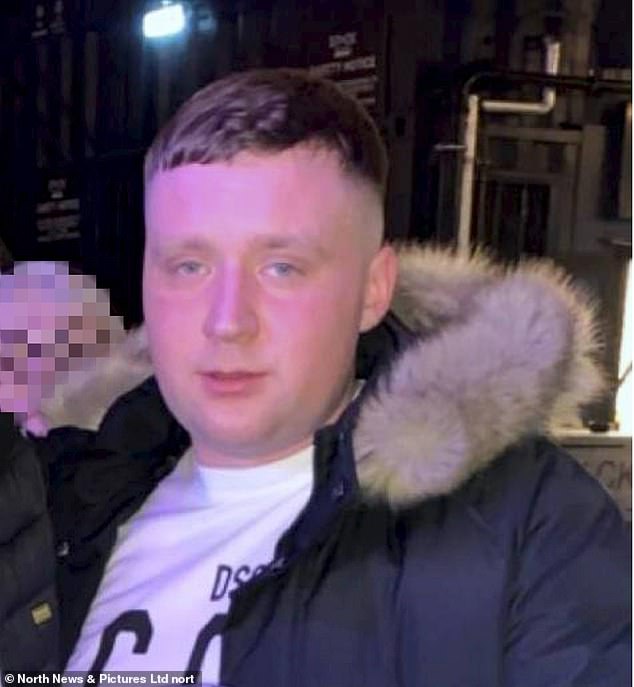 The body of Brandon Lee, 24, of Jarrow, was found by police slumped in a chair amidst a ‘bloodbath’, with his killer sat nearby. He had been brutally attacked with a weapon like a machete with most of his injuries to his face and neck

They met up occasionally and Mr Lee, 24, of Jarrow, sometimes visited Miller’s flat – as he did on the evening of Monday May 11, when Garry Miller was also present and the men became intoxicated.

David Brooke QC, prosecuting, said that late on the Monday night and into the early hours of the Tuesday morning, neighbours became aware of a lot of noise from Miller’s flat.

After a call from a neighbour and from Miller himself, at 3.53am, saying he had killed a man, police arrived and followed a trail of blood upstairs.

Prosecutor David Brooke QC, who described the scene as like a ‘bloodbath’, told jurors during the trial: ‘When they went into the sitting room, they found Ross Miller sitting in a chair covered in blood. 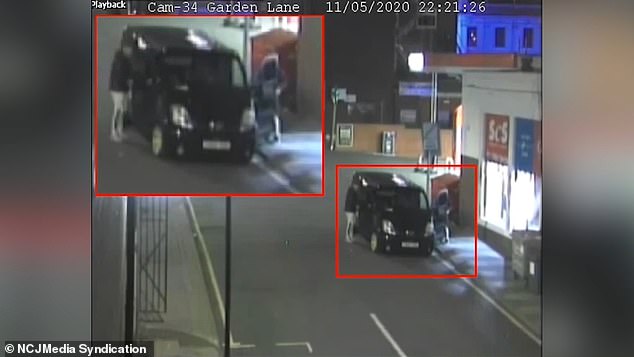 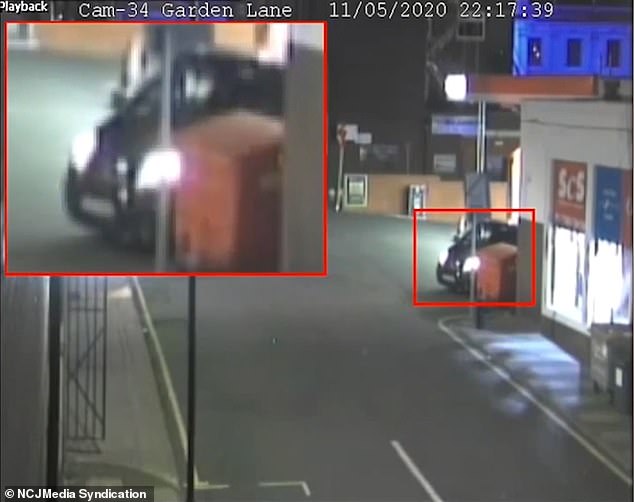 ‘On the floor, bent over, was the body of another man, Brandon Lee who was obviously dead.

‘He wasn’t wearing anything on his top half. The police could see there were significant injuries to the body including puncture wounds to the back.

‘As well as a knife which was found near Ross Miller, they found a blood-stained machete on the settee. There was a great deal of blood in the room and on the walls.’

A post-mortem examination determined that Mr Lee had died due to stab wounds to the neck and chest.

Mr Brooke said: ‘The principal findings were ‘an enormous number of incised wounds on the head, trunk and upper limbs including a stab wound traversing the neck, ie. in one side out the other, damaging the left carotid artery and a stab wound passing from back to front through the trunk traversing the right lung and the right atrium of the heart’. 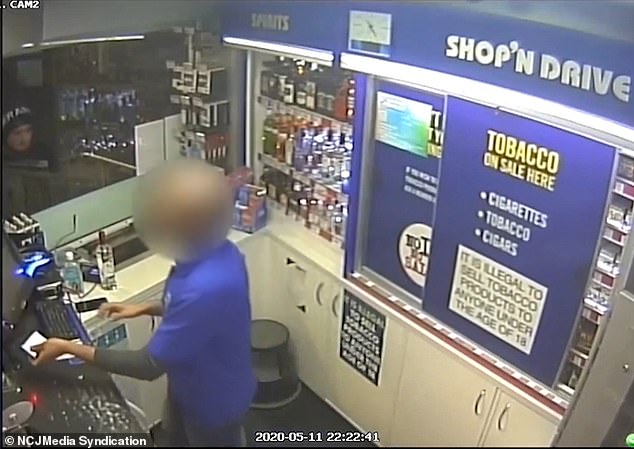 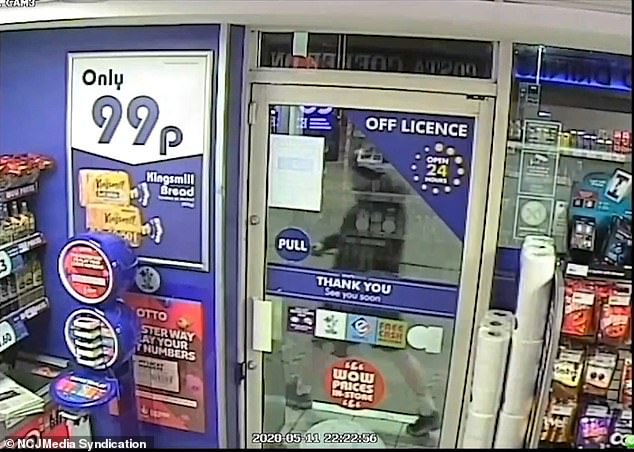 Miller, seen here on the garage CCTV hours before he hacked his friend to death, is facing a life sentence for the murder

‘This second wound entered the upper back and went through thick bone just to the right of the spine and then through the left lung, the heart and through three ribs and out the other side. It required considerable force.

‘The very large majority of the other injuries were also ‘sharp’, ie. caused by a weapon or weapons with a sharp edge or edges.

‘Some were in a stabbing action (at least 13), many were undoubtedly caused in a chopping action.

‘There were at least 30 injuries caused by a sharp weapon used in a chopping action.

‘The greatest concentration of these was on the face and head. One injury ran from the just below the left lower lip to above the right eyebrow.

‘The underlying facial bones were badly fractured – caused by the same chopping mechanism.

‘Another ran across the bridge of the nose and fractured the bone underneath. There were eight separate incised wounds over the top of the head and some underlying cuts in the bone.

‘There are many other injuries including over the arms and upper body. In total, there are injuries from 60 separate actions from a sharp-edged weapon or weapons including chopping, stabbing and potentially slashing.’

Miller, of Victoria Road, South Shields, is facing a life sentence for murdering Mr Lee at Miller’s flat in May.

Miller, 23, of Victoria Road, South Shields, denied murder during a trial at

Newcastle Crown Court but was found guilty after less than an hour deliberation by the jury.

Miller’s brother, Garry, was last week cleared of the charge.