A MUM was "shocked" when a neighbour posted a letter complaining about her children's "constant screaming" and "unbearable noise".

Leona Palmer, 49, received the note headlined "noise nuisance" after a party for her triplet sons' eighth birthday during lockdown. 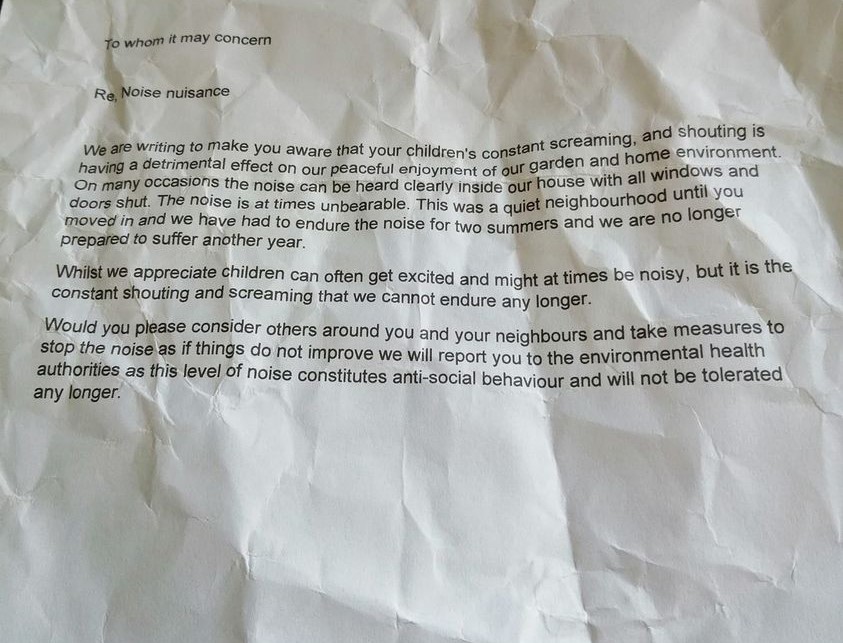 Mum-of-three Leona and her husband arranged to have an outdoor bouncy castle for the celebration on Saturday April 18 at their home in Burbage, Leicestershire.

The family had organised a 'rota system' for relatives to visit so that they could stick to the government's rule-of-six during the kids' party.

But typed letter arrived later from the local resident moaning about "unbearable" noise and warned it "will not be tolerated".

During the party, a Police Community Support Officer (PCSO) arrived at their home following a complaint from the neighbour, but no further action was taken.

Leona told LeicestershireLive: "We had a bouncy castle on the Saturday for the boys' eighth birthday and arranged a rota system for family to come round in the garden so that we didn't break the rule of six.

"We had a PCSO attend the house after a complaint from a neighbour saying that we had 15 people in the garden.#

"Obviously this did not get the desired effect as we only had six people round."

The following Thursday, Leona received a furious letter from the neighbour which threatened to report them to authorities.

Especially after being in lockdown with children, I was shocked as we have never received a complaint since moving in three years ago

It read: "We are writing to make you aware that your children's constant screaming and shouting is having a detrimental effect on our peaceful enjoyment of our garden and home environment.

"On many occasions the noise can be heard clearly inside our house with all windows and doors shut. The noise is at times unbearable.

"This was a quiet neighbourhood until you moved in and we have had to endure the noise for two summers and we are no longer prepared to suffer another year.

"Whilst we appreciate children can often get excited and might at times be noisy, but it is the constant shouting and screaming that we cannot endure any longer."

Leona said she was shocked when she read the letter as she has never had any complaints since moving into the area.

She said: "Especially after being in lockdown with children, I was shocked as we have never received a complaint since moving in three years ago.

"Due to Covid, the only outside space the children can go is their own garden."

The neighbour threatened that authorities would be called if the noise continued.

The letter continues: "Would you please consider others around you and your neighbours and take measures to stop the noise as if things do not improve we will report you to the environmental health authorities as this level of noise constitutes anti-social behaviour and will not be tolerated any longer."

Hinckley and Bosworth Borough Council (HBBC) said it has not received any such complaints in 2021.

A spokeswoman told LeicestershireLive: "We have received no complaints in 2021 regarding noise from children in that area.

"Such complaints are received from time to time and HBBC have a duty to investigate as we do all noise complaints.

"However, noise from children is not abnormal noise and is to be expected from a family home.

"HBBC can investigate further if the noise is beyond what would be expected as the norm in such circumstances and would be dealt with on a case by case basis."