THIS is the horrific moment two schoolgirls viciously kick and punch a defenseless teenager as she cowers on the ground.

The video shows the attackers repeatedly stamp on and drag the victim by her hair as she walked through a park in Sheldon, Birmingham. 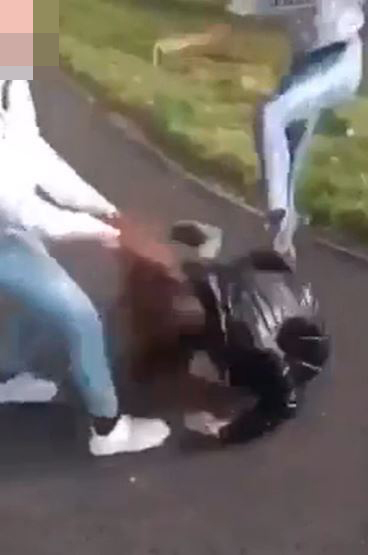 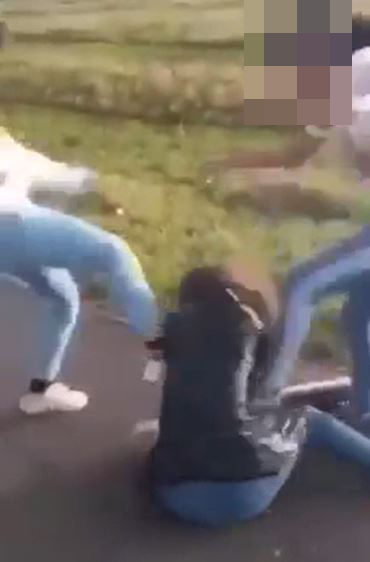 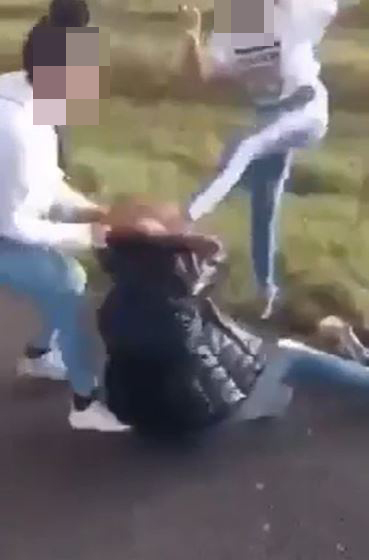 The girl’s mother – who obtained the footage and shared it on social media – said her daughter was targeted after “looking in the direction” of the attackers, who confronted her and asked if she had “beef”.

She was left with a “trainer-shaped bruise” on her face and a “bald patch” on the back of her head from where the girls allegedly tore out clumps of hair.

The 14-year-old is now “terrified” to go outside and struggles to eat or sleep.

Police have arrested two girls, aged 12 and 13, on suspicion of assault and have appealed for witnesses to come forward.

A 24-second clip, which has no sound, shows the victim sitting helplessly on a footpath as she is continually kicked in the head by the two girls.

The attackers then yank her hair before punching her in the face.

One of the girls stamps on her back before the other bully drags her along the path by her hair.

They continue to beat her before a boy and a girl eventually intervene and stop the violence.

TOP TIPS ON HOW PARENTS CAN HELP THEIR KIDS COMBAT BULLYING

The victim’s mother, who asked to remain anonymous, said her daughter was walking through Sheldon Country Park with a friend when the girls approached and asked if they had “beef”.

Her daughter said “no” and tried to leave but was attacked as she walked away, according to the mother.

She said: “She’s never seen the girls before, they don’t live round here. All she did was look in their direction.

“She said to me afterwards: ‘Mum, I knew straight away from the way they were looking at us something bad was about to happen’.

“They may be younger than my daughter but they were very tall for their age and they gave her absolutely no chance to defend herself. She didn't have a hope in hell.

“She didn't provoke them in any way, she didn’t say anything to them.”

Her mum added: “She had a trainer stamp mark on her head for days afterwards.

“Her cheek is still really bruised and swollen. One of her eyes closed up and she has a bald patch on the back of her head.

“She’s not eating, she’s not sleeping, and she’s terrified to go outside – she just starts crying.

“I feel guilty that I wasn’t there. She’s my first-born and my job’s to protect her.

“I don’t understand why it happened to her, she’s never done anything to anyone. She’s never been in trouble.”

The victim and her friend are due to give a statement to police on Sunday.

A West Midlands Police spokesman said: “Officers investigating an attack on a 14-year-old girl in Sheldon Country Park, The Radleys, on June 13, have arrested two girls.

“The girls, aged 12 and 13, were held over the assault which saw one teen left with facial injuries and bruising, and another girl threatened.

THE SUN'S BLOCK THE BULLYING CAMPAIGN SEEKS TO TACKLE ABUSE

Bullying is the biggest threat faced by children today, a parents’ survey has revealed.

Six in ten adults say they fear their youngsters being victimised in or outside school more than any other risk.

They listed it well above sexual abuse, drug addiction, boozing and smoking a their greatest concern.

The everyday fears of parents were laid bare in a survey by telly presenter and campaigner Martin Roberts.

The Sun launched a Block the Bullying Campaign with the NSPCC – calling on internet companies to take down sickening videos of children attacking other children.