Mongols bikie president Toby Mitchell has been granted bail after being charged over an early-morning fight in which he was knocked out.

Mr Mitchell exchanged punches with an unknown man in Southbank about 3am on November 15 while on bail for other alleged offending, Melbourne Magistrates Court heard on Wednesday. 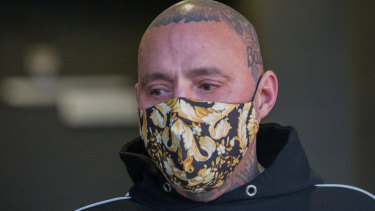 Police say CCTV footage of the fight shows Mr Mitchell and the other man exchange words and then fight for about 40 seconds.

Detective acting Sergeant Jordan Collinson said Mr Mitchell broke free from his companions' attempt to keep him away from the other man and struck him in the face and body.

After the pair were briefly separated, the other man punched Mr Mitchell to the face and knocked him to the ground, the court heard.

Mr Mitchell appeared to be unconscious, Detective acting Sergeant Collinson said, and was dazed when helped to his feet and walked away.

Police have not identified the man who punched Mr Mitchell and no one reported the incident, the court heard.

Mr Mitchell, 45, is charged with affray and committing an offence while on bail, and the new charges have been laid on top of ones stemming from an October 4 incident, where he allegedly hit a man three times outside a South Yarra cafe. He faces affray and assault charges over that incident.

He was last month granted bail on the charges from the South Yarra incident and on Wednesday magistrate John Bentley granted bail again but ordered Mr Mitchell to abide by a curfew so he stays home between 8pm and 6am.

"I don't want to see him in this court again because he's out drinking in Southbank," Mr Bentley said.

He said Mr Mitchell was a person of notoriety who attracted attention in public.

The magistrate also refused an application by police to revoke Mr Mitchell's bail on the charges stemming from the South Yarra incident.

Defence counsel Damian Sheales said Mr Mitchell was in hospital early this week preparing for a surgical procedure stemming from when he was shot by an unknown gunman in Brunswick in 2011.

Mr Mitchell suffered from a series of medical complications stemming from being shot, Mr Sheales said, and needed to take at least 15 different types of medication daily.

Police had opposed Mr Mitchell getting bail and argued he was an unacceptable risk and a danger to the public.

Mr Sheales said the alleged offending was not a serious example of affray.

Mr Mitchell, who listened to the hearing on a telephone from a police station, must not associate with his Mongols clubmates while on bail.

He is due to next appear before court in March.