Brake! Moment a £150,000 Lamborghini supercar is rear-ended by a Ford Fiesta driver

This is the sickening moment a Ford Fiesta driver smashes into the back of a Lamborghini worth more than £150,000.

The collision is thought to have taken place in the Cheetham Hill area of Manchester over the weekend.

Footage, filmed from a passing car, as shared on Twitter on Saturday ,December 19, and shows the blue sports car being rear-ended by another motorist. 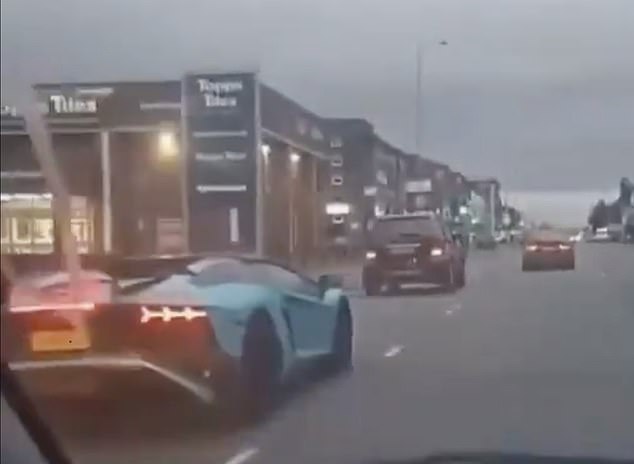 Dramatic footage shows an aqua blue Lamborghini worth more than £150,000 being rear-ended by another motorist near Cheetham Hill in Manchester at the weekend

In the video, the aqua blue supercar roars past the in the inside lane as a passenger in a car on the outside lane records the moment.

The Lamborghini unexpectedly applies the brakes, stopping in the lane to take a left turn.

However, a silver Ford Fiesta behind the supercar appears to react too slowly and goes slamming into the back of it.

There is a crunch and the person recording exclaims: ‘Oh s***!’ as the two vehicles collide.

The driver of the Lamborghini can then be seen turning left at a junction, while the car behind it remains still. 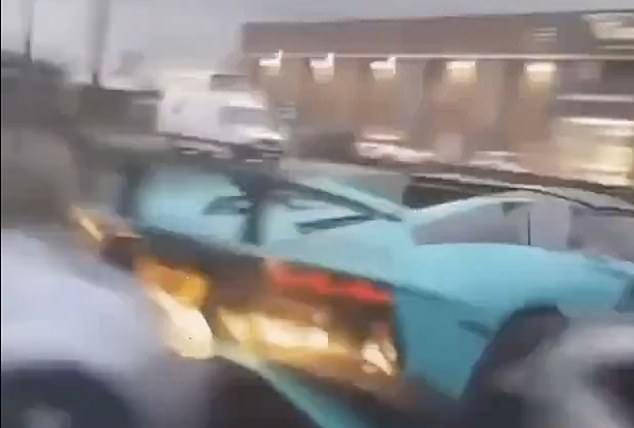 The man recording the video utters his disbelief again as his car drives away.

Since it was shared on social media, the footage has reached almost 20,000 views and has started a debate with Twitter users about who is at fault.

One person wrote: ‘Lambo’s fault, speeding up when he’s taking a left, to all but near stop when turning, bloke behind has f***all chance.’

However, a Twitter user argued back: ‘If you a*** end someone it’s your fault, it doesn’t matter what they’ve done.

‘You were either too close to stop in due course or had enough room but weren’t paying attention.’

Romie Jacob added: ‘That’s 30 grand rear damage, I’d burn off too could lose your life over such claims.’