The streets of Milan were deserted again last night after Lombardy imposed an 11pm curfew to tackle a surge in coronavirus cases, as Italy piled up a record 16,000 new infections on Thursday.

Seven months after Italy’s empty streets and piazzas became a symbol of the first wave of the pandemic, the square in front of Milan’s Duomo cathedral was abandoned once again as the new rules took effect.

Lombardy, the focal point of Italy’s spring crisis, once again has the most cases in the country with more than 4,100 of the 16,079 infections that were added to Italy’s tally last night.

The northern region also has more intensive care patients than any other, with 156, and its leaders have banned unnecessary movements between 11pm and 5am in a bid to bring the crisis under control. 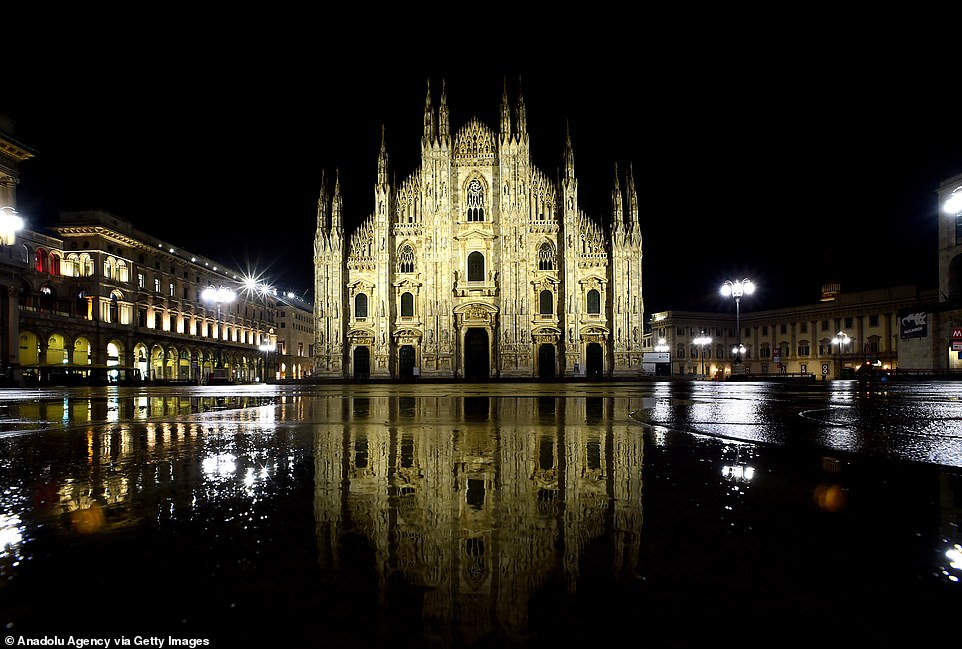 Empty Milan: The piazza in front of the city’s Duomo cathedral is empty on Thursday night after the 11pm curfew took effect in Lombardy as coronavirus cases rise again in Italy 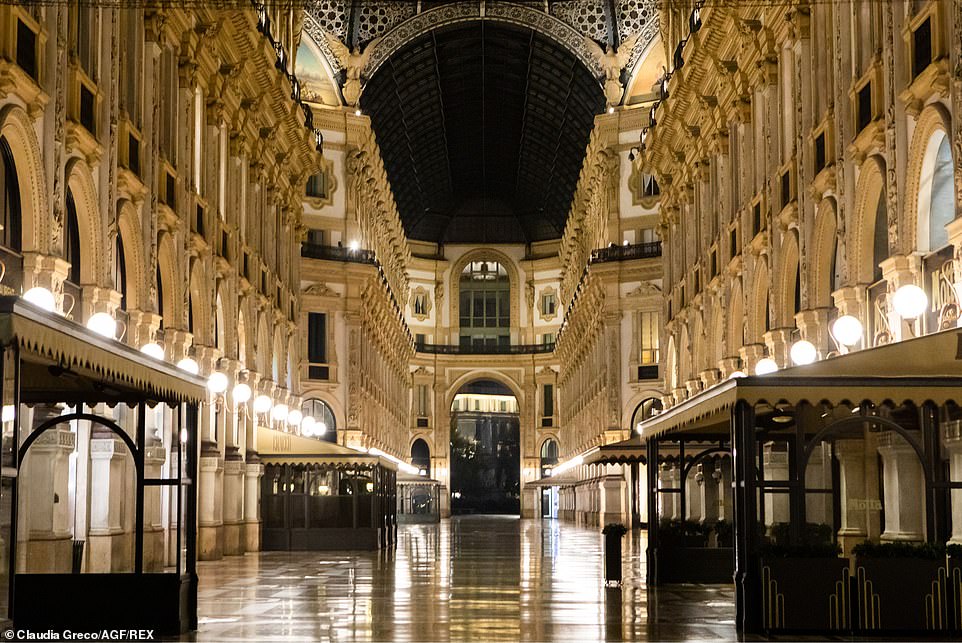 Milan’s luxurious Vittorio Emanuele II shopping gallery is deserted after the curfew was imposed, with Lombardy once again suffering the most coronavirus cases in Italy 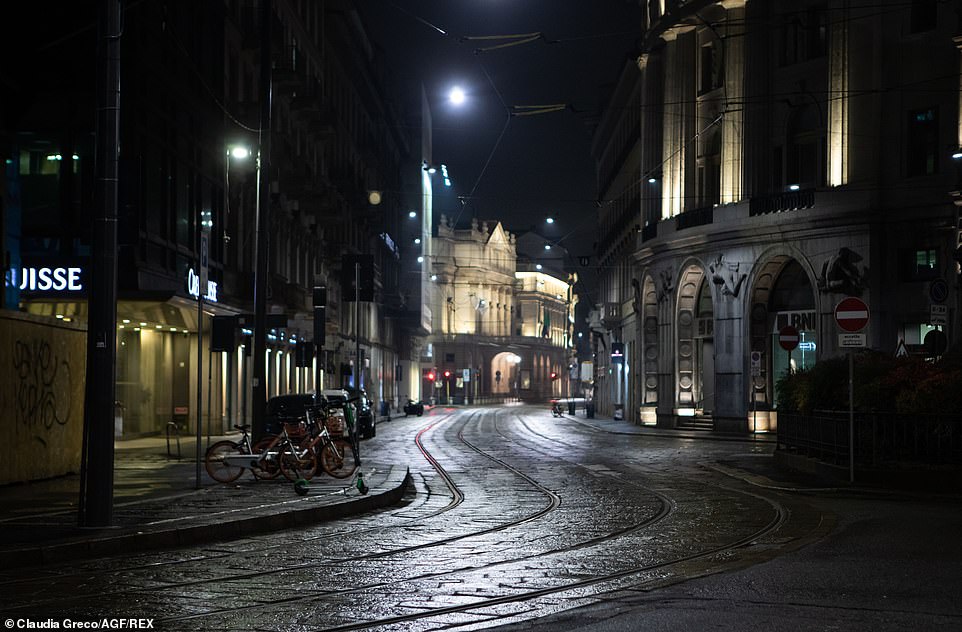 A road leading to Milan’s La Scala theatre is empty on Thursday night with cars, pedestrians and trams all absent amid a three-week curfew intended to stem a rise in coronavirus cases 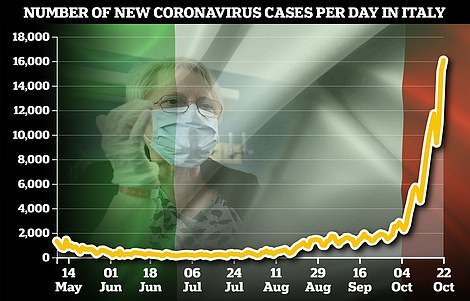 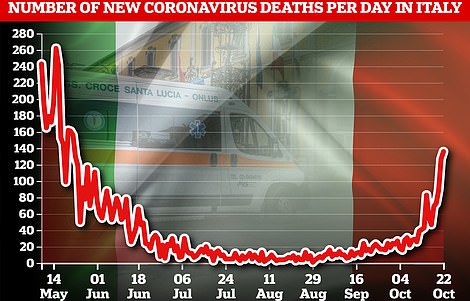 Italy’s daily infection count (left) has risen massively since the summer lull, reaching a new peak of 16,079 on Thursday, while deaths (right) are also on the rise again

The curfew order, signed by regional president Attilio Fontana, took effect on Thursday night and will run until at least November 13.

Anyone who is outdoors from 11pm to 5am will have to justify themselves to authorities with an official form, in an echo of some of Europe’s toughest lockdown measures in the spring.

In addition to the curfew, Lombardy’s secondary schools are going back to distance learning and shopping malls will be closed at weekends in a bid to reduce transmission.

Rome is also starting a curfew tonight after Lazio governor Nicola Zingaretti – who was seriously sickened with Covid-19 during the first wave – imposed a 30-day order.

Naples will also shut down at 11pm after a similar order by the governor of the southern region of Campania which added nearly 1,550 cases on Thursday – the most outside the wealthy north.

After locking down the entire country in March, Italian PM Giuseppe Conte wants to avoid a repeat but has told people across the country to avoid ‘unnecessary’ movements.

New nationwide rules include a ban on amateur contact sports and school trips, and restricting bars and restaurants to table service after 6pm. 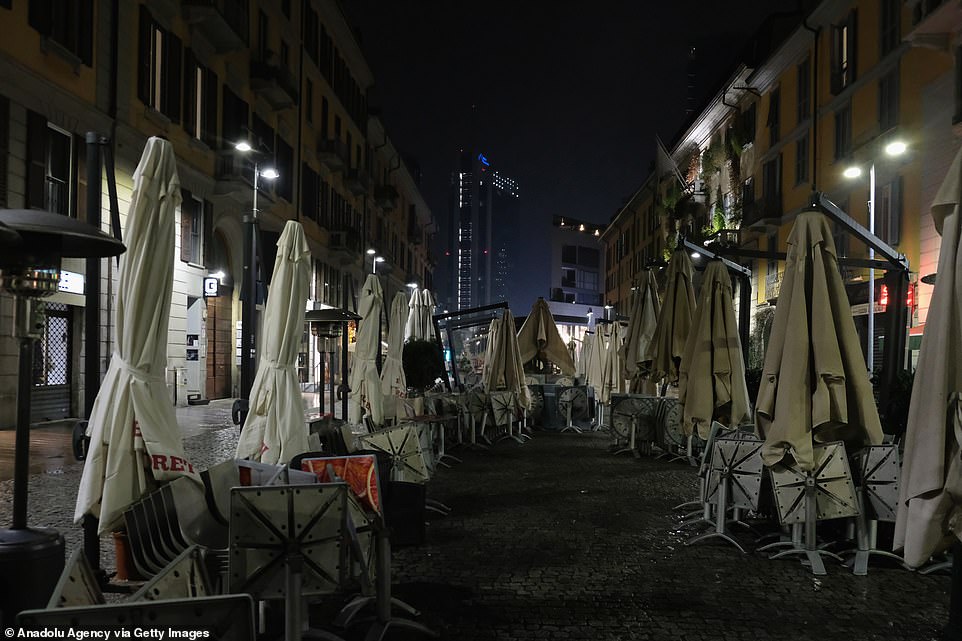 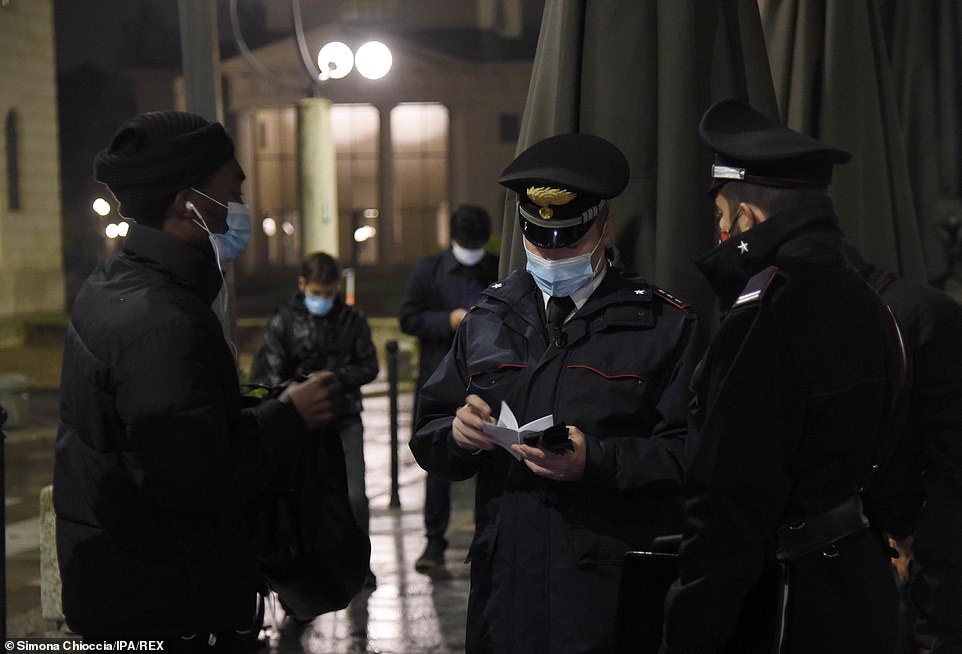 A police officer wearing a mask takes details from a passer-by, also wearing a face covering, on the streets of Milan last night 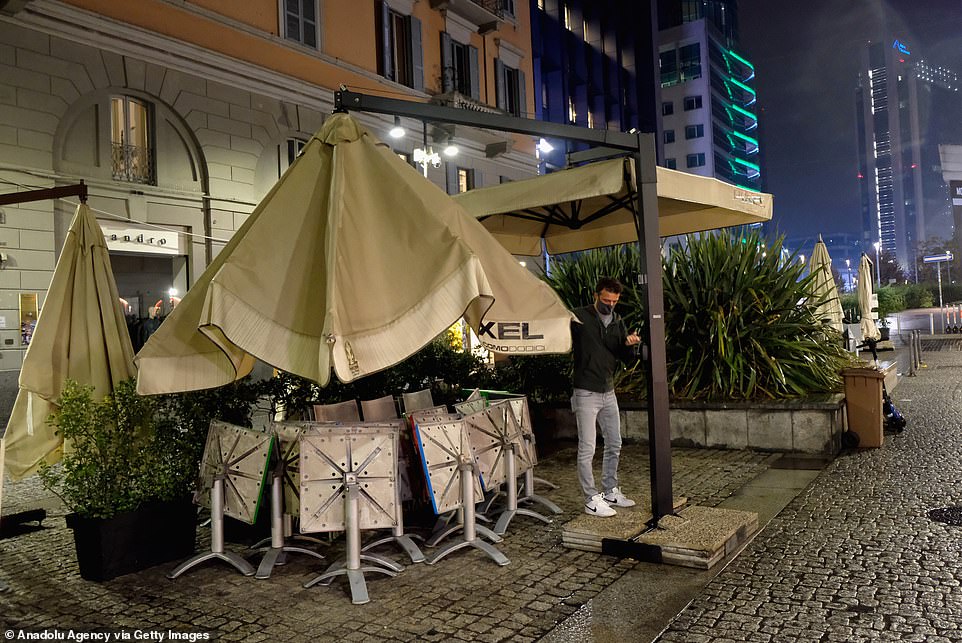 After seeing 10,000 new cases for the first time last Friday, Italy has beaten its 24-hour record another three times since then, with Thursday’s 16,079 the latest peak.

While the numbers are still a little less dire than in Spain and France, new infections have quadrupled in the space of a fortnight, with 84,130 cases in the last week compared to 20,991 from October 2-8.

More concerningly, deaths have also increased sharply, with two consecutive days of more than 100 deaths after no such days since the end of May.

The latest 136 deaths announced on Thursday took the total to 36,968, the second-highest death toll in Europe after the United Kingdom.

The number of people in intensive care with the virus has also risen steadily. It stood at 992 on Thursday, up from 870 on Tuesday and compared with around 40 in the second half of July.

There are now around the same number of intensive care patients as when Italy first went into lockdown on March 9, though then they were far more concentrated in the north. 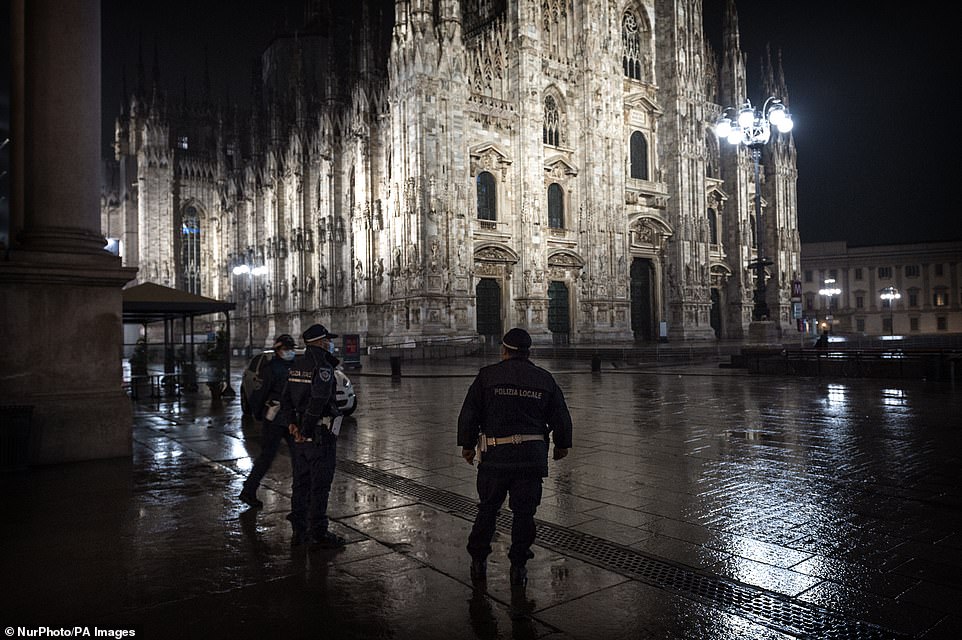 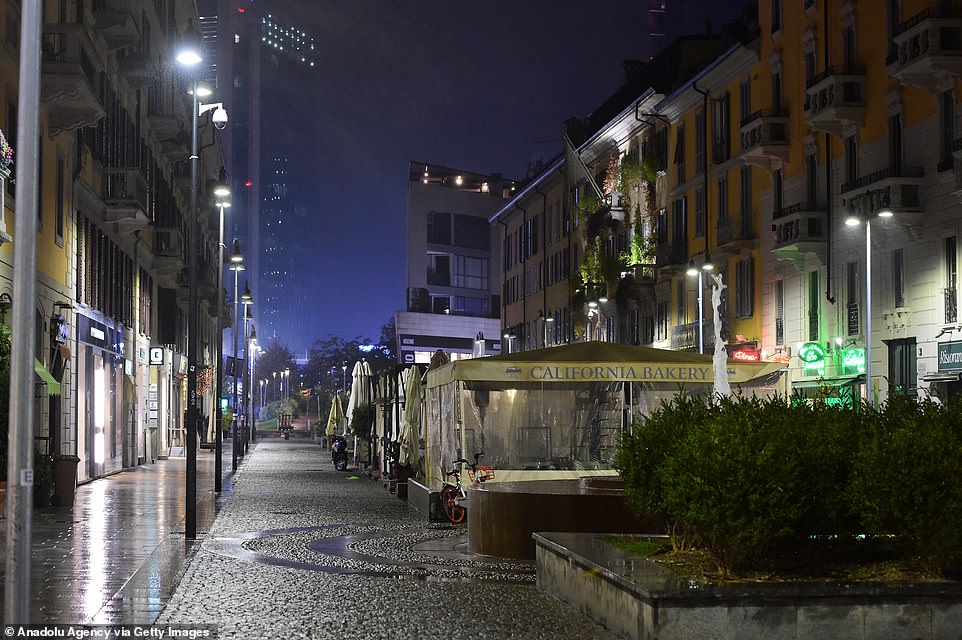 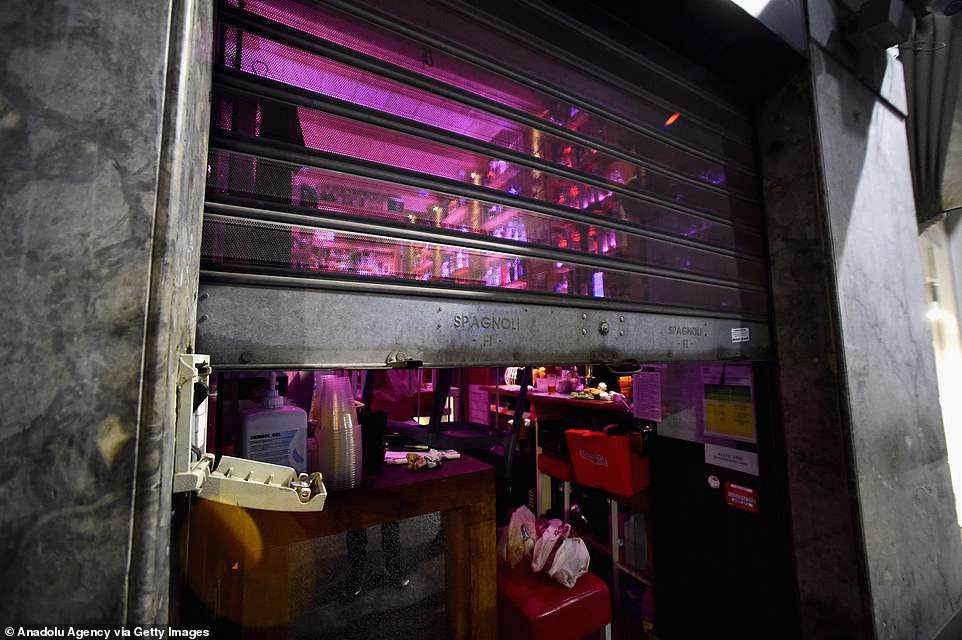