Melbourne bird lovers are in a flap after the city's newest peregrine falcon chicks hatched atop a city skyscraper this week, live on camera.

Thousands of fans of the 367 Collins Street falcons have been glued to the 24-hour livestream on a dedicated website to catch a glimpse of three new nestlings. 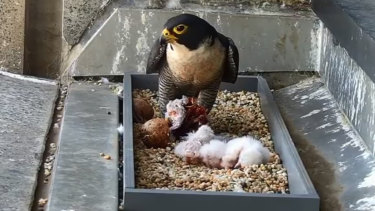 According to regular followers of the feed, the first chick hatched shortly after 11am before two others entered the world over the following few hours.

Strong winds blew large pieces of eggshell away on Friday afternoon as one of the two adult falcons nuzzled the new babies to keep them warm.

By Friday evening, two of the chicks – known as eyasses – appeared white and fluffy, while another sibling appeared wet and only had a few feathers. One of the three had also begun to open its eyes.

Peregrine falcon expert Victor Hurley, who has managed the nest site for almost three decades, said those tuning in to watch the chicks could expect to see them being fed every hour or two over the next few weeks.

"The male will be flat stick catching sparrows, starlings and pigeons because feeding them something fresh is particularly important when they’re young like this," Dr Hurley said.

"This species hunts birds on the wing and I’ve seen one female bounce along a corrugated tin roof deliberately making lots of noise with her talons to scare pigeons up into the air as the male waits to grab one."

One of the falcon parents – believed to be the dad – spent much of Friday sitting on his new nestlings, but with every turn of the head, watchers caught a glimpse of the youngsters.

The webcam livestream then broadcast a few tense minutes when, at 2.59pm, dad flew the coop for three whole minutes, leaving the youngsters alone, before returning with their first meal. 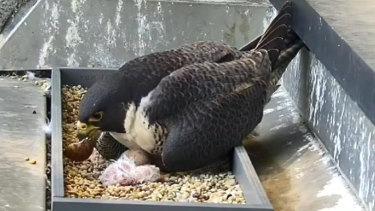 At 3.16pm, mum returned to help keep an eye on the tiny trio.

The event comes after weeks of anticipation around how many of the three eggs would hatch as the parents took turns to keep them warm.

The 2018 breeding season was an emotional rollercoaster for followers, when three of the same couple’s eggs hatched, only for two nestlings to die after about four weeks. 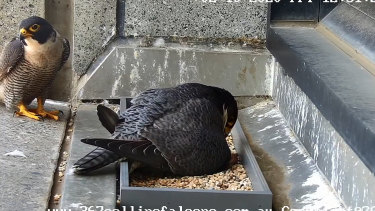 Bird lovers first discovered a breeding pair on the side of the Collins Street tower in 1991 and have helped install new breeding boxes with improved drainage over the years to help keep the falcon eggs out of winter water.

Dr Hurley said it was important to let nature do the rest.

"They know what they're doing. These things have been around for hundreds of thousands of years," he said.

The latest three eggs were each laid on August 25, 27 and 29 and left to get cold until full time incubation started on August 30.

Dr Hurley said this is how birds time it – so all eggs synchronise and hatch within hours of one another.

This way, he said, they all have the best chance of growing and eating together.

"With the peregrines, the hungriest then waddles to the front of the queue and gets fed first. The adults then will see to it that none of the young miss out."

Dr Hurley said the next key date to watch for will be about 35 to 42 days from now, when the baby birds begin taking their first flights.

"It's delightful and it has become such a Melbourne story," he said.