The Mayor of Middlesbrough has been heavily criticised for social media posts which appeared to play down the significance of white privilege in his region.

Andy Preston’s suggestion that poverty is the more poignant issue comes amid widespread Black Lives Matter protests, and Facebook users have labelled the post as ‘offensive’.

Mr Preston’s statement is the first time he has spoken out publicly about the movement – which recently saw hundreds of local residents take part in two peaceful demonstrations.

The post, which came on Tuesday night and was greeted with condemnation, admitted that ‘there is racism here and other kinds of discrimination’. 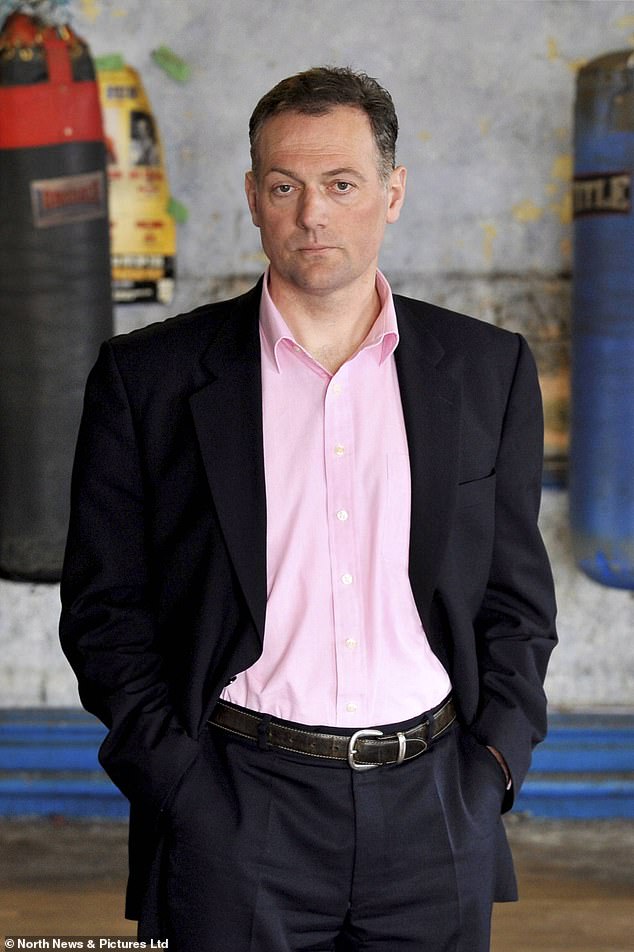 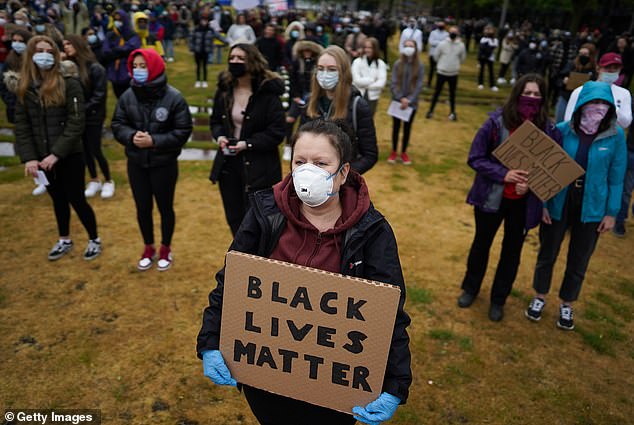 However, it then argued that deprivation is the ‘biggest barrier to progression in life in Middlesbrough.’ Mr Preston was accused of being ‘tone deaf’ with his beliefs.

His assertion that white privilege has generated ‘careless talk’ is particularly controversial in the current climate, with protesters taking to the streets worldwide to campaign against violence and systemic racism.

The term refers to the idea that people are afforded basic rights due to their skin colour.

Mr Preston wrote: ‘Don’t listen to careless talk in the media about white privilege – look at the awful situations so many white and non-white families face in Middlesbrough and other places. Deprivation here appears to be colour blind.’

Having been confronted by a number of irked constituents, he later added: ‘How can it be true when so many white-skinned people do so badly in our society?

The statement was also slammed by MP’s, with Andy McDonald, MP for Middlesbrough, angered by a ‘staggering ignorance’.

He said: ‘I find the comments made by the Mayor of Middlesbrough, Andy Preston, incredibly disturbing and his words reveal a staggering ignorance of the issue.

‘His description of white privilege as “careless talk in the media” is completely dismissive of the systemic and institutional racism that has cost so many of our sisters and brothers their lives and blighted the lives of millions through the centuries.

‘This has to be the time for change. We need to take an objective look at our own history, reflect and learn. Sadly, it appears, in as far as Mr Preston is concerned, that is going to be an uphill task.’

Olalekan Odedeyi, from the Save the Woman project set up by Teeside University, wrote a letter to Mr Preston in response to his post.

It read: ‘You may wish to note that it is not “careless” to talk about white privilege but you have been careless to dismiss those who take that issue seriously in your recent statement about the Black Lives Matter demonstrations. 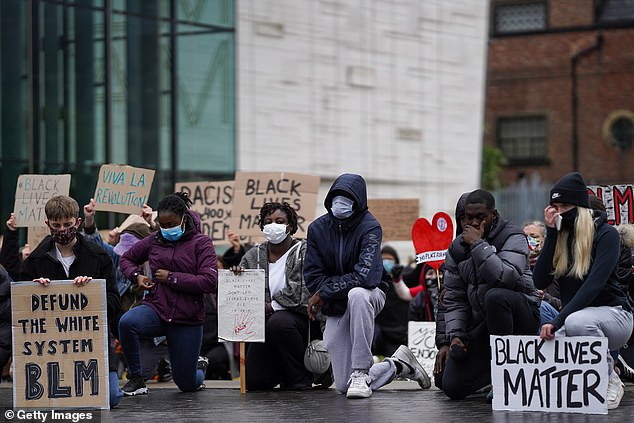 Statues dedicated to Captain James Cook are being threatened with removal by the ‘Topple The Racists’ campaign (left, in Great Ayton; right near Admiralty Arch in London) 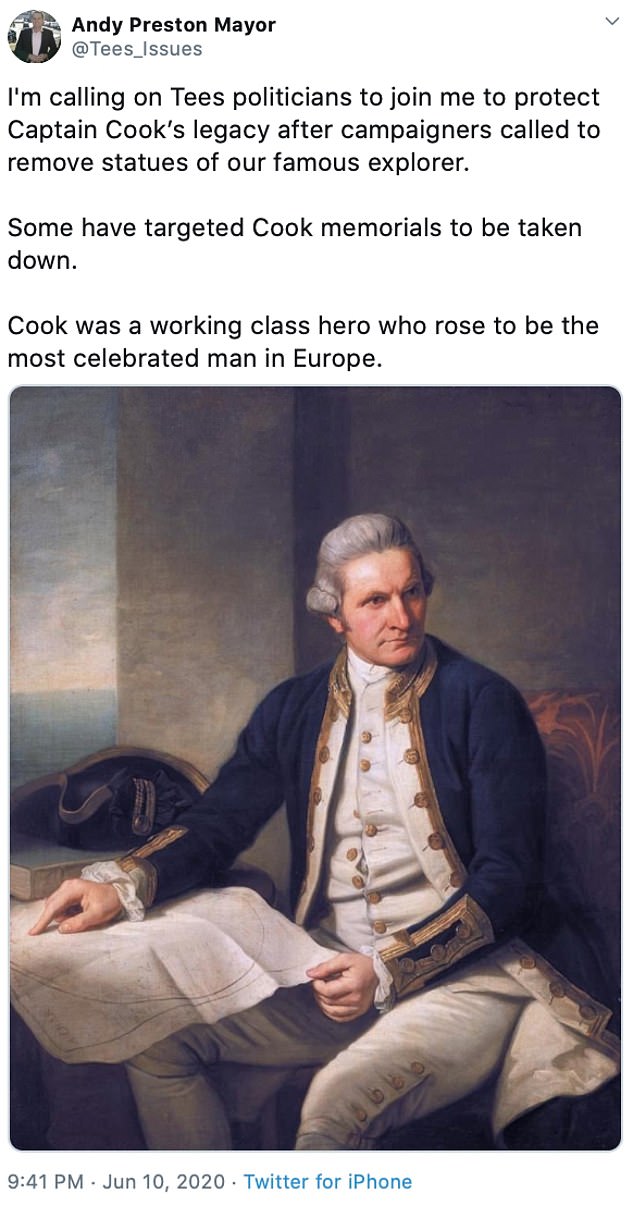 Mr Preston had tweeted: ‘I’m calling on Tees politicians to join me to protect Captain Cook’s legacy after campaigners called to remove statues of our famous explorer’

‘Given the sensitivity of the events after George Floyd’s death, in your capacity as the top executive member at Middlesbrough Council, could you please confirm if your post were appropriate, respectful, and professional?

‘As an African led organisation, we thought it would be helpful to remind you about the Structural and Institutional Racism affecting the people of Middlesbrough. The impact of Social Services on the lives of African, Asian and Minority Ethnic (AAME) Families is disgraceful.’

Mr Preston later urged people to be ‘careful’ with their language when discussing racism.

He told the BBC that ‘words like privilege can be misconstrued’, and added that poverty ‘will be the single biggest driver in Middlesbrough of your performance at school and whether you earn a decent wage’.

The Mayor of Middlesbrough also made the headlines on Thursday after defending statues of Captain James Cook that are targeted for removal by the ‘Topple The Racists’ movement.

Mr Preston waded into the national debate and said that locals are proud of the 18th-century explorer. Statues of him are located in Great Ayton, Whitby and London.

A primary school, hospital and road are all named after Cook in Middlesbrough, but the campaign describes Cook on their website as a ‘colonialist who murdered Maori people in their homeland’.

Let’s put the USA to one side for now and talk about Middlesbrough because that’s what we experience day to day.

Middlesbrough’s not perfect but it’s a relatively tolerant place and the rapid rise in our BAME population has happened with few major issues. Of course there is racism here and other kinds of discrimination. All forms of discrimination are wrong and we need to fight it.

All humans deserve an equal opportunity to learn and earn in peace. In the UK we’re very luck to have that opportunity. But for some of us there are barriers that make this more difficult.

The biggest barrier to progression in life in Middlesbrough, and almost anywhere, is always the same: poverty.

If you live in extreme poverty in Middlesbrough or Mumbai or Montreal then the odds are stacked against you – and your kids.

By some measures Middlesbrough is the most deprived place in England.

If you’re deprived in England then you’ll likely live a shorter life, have worse health and do less well at school. These negative outcomes are driven largely by poverty not skin colour.

Don’t listen to careless talk in the media about white privilege – look at the awful situations so many white and non-white families face in Middlesbrough and other places. Deprivation here appears to be colour blind.

We do need to fight all kinds of discrimination and we need to unite against the biggest issue that holds back progress: poverty.

As mayor of Middlesbrough my role is to fight for a better future for everyone. I promise to fight especially hard for anyone experiencing discrimination or poverty.