Four in 10 Brits believe Matt Hancock must QUIT if he fails to hit 100,000 daily coronavirus test target by end of April amid claims him blaming the Easter weekend for ‘lower demand’ for checks is a ‘fig leaf’ to cover up testing failures

Four in 10 Britons believe Matt Hancock should resign as Health Secretary if he fails to deliver on his promise to increase daily coronavirus tests to 100,000 by the end of the month.

An exclusive poll for MailOnline carried out by Redfield & Wilton Strategies found 40 per cent of the nation believe Mr Hancock should quit if he falls short of the target while 28 per cent believe he should stay in post.

The Health Secretary is under mounting pressure over the UK’s testing regime after he claimed that there had been lower demand than expected for checks over the Easter weekend which meant tests could now be expanded in the social care sector.

His claims regarding reduced testing demand among NHS workers have sparked controversy with health bosses insistent they are still struggling to get all of their staff the tests they need to get them back to work.

Healthcare and union sources told MailOnline the claims of lower demand could be being used as a ‘fig leaf’ by the government to cover up testing failures.

They expressed concerns that self-isolating NHS workers are not receiving the invites they need to visit drive-through testing sites and that the location of the sites is making it difficult for some staff – especially those who are unwell or who do not have their own transport – to access them. 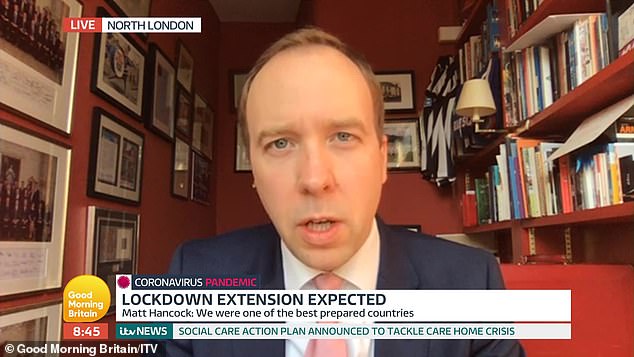 Matt Hancock, pictured today on ITV’s Good Morning Britain programme, claimed there was lower than expected demand for coronavirus tests over the weekend 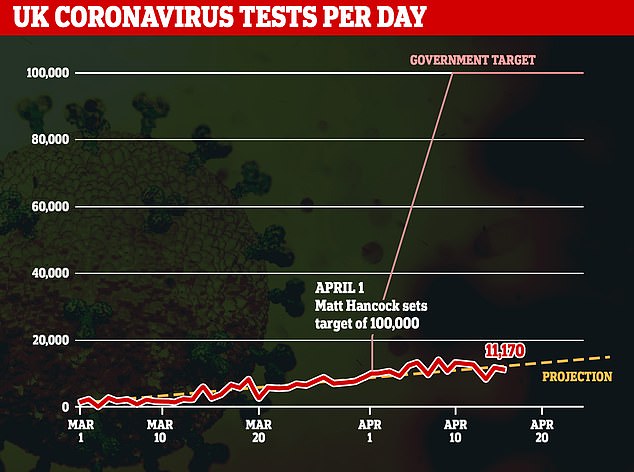 The Health Secretary has set a target of 100,000 daily tests by the end of April. The graph shows how much work the government has to do to hit the six figure number

In the 24 hours to 9am yesterday, the number of tests carried out stood at 15,994 with 13,950 conducted by the NHS and Public Health England and 2,040 at drive through sites. Testing currently is a split between patients, NHS staff and social care workers.

Approximately 60,000 NHS staff and their relatives have now been tested for the disease while the latest staff absence data shows five per cent of doctors are not at work and 8.4 per cent of nurses.

Mr Hancock has committed to ramping up the UK’s testing capacity to 100,000 a day by the end of the month.

Today the Health Secretary said the current capacity for testing is about 25,000, telling ITV’s Good Morning Britain programme: ‘In the middle of March, we expected the rate to be, in around four weeks, at around 25,000. That is what our capacity is today.’

The government has faced repeated criticism because the number of tests being carried out continues to fall well below capacity.

Asked why that was the case, Mr Hancock today repeated his claim, first made at yesterday’s Downing Street press conference, about an apparent recent fall in demand.

‘We have increased the capacity, over the Easter weekend far fewer people came forward to be tested frankly than we expected,’ he said.

‘Hence, yesterday, I could say that all social care staff who needed to be tested can be tested, and residents in social care and people coming from hospital to social care, precisely because we have got that capacity.

‘We’ve increased the capacity and that is on a trajectory to get to the 100,000 by the end of the month’.

Mr Hancock is insistent he remains committed to hitting six figure testing by the end of the month, telling LBC Radio he and his team are ‘working flat out to hit that goal’ and he is ‘certainly not taking my foot off the accelerator’.

However, his claims of lower demand over the Easter weekend have been met with scepticism in some quarters amid suggestions that a lack of access to tests could be contributing to the flat numbers.

One healthcare source said the suggestion by Mr Hancock that NHS staff had not gone to get tested because of the Easter weekend was ‘surprising’ and ‘very odd’ given that so many staff are still off work in self-isolation.

They said they were aware of NHS staff in self-isolation who have not been invited to go and be tested at one of the 22 drive-through sites which have been set up across the country. Those tests are strictly by appointment only.

Meanwhile, MailOnline has also been told that some NHS staff in one part of England had faced a five hour round trip to visit a testing site – once the journey there and back as well as waiting time was taken into account.

A union source said such a journey was simply not feasible for many staff, especially if they are unwell, adding that the location and nature of the sites made it challenging for people without their own transport to get tested. 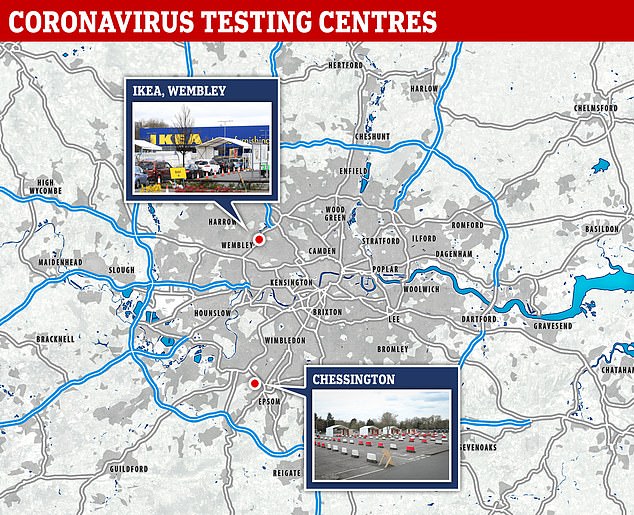 They claimed the Easter weekend could be being used by the government as a ‘fig leaf to cover up the fact that they are still not able to offer tests in the right places’.

Responding on the issue of test numbers being below overall capacity, the Prime Minister’s Official Spokesman said today: ‘We are building testing capacity all the time.

‘The reason the figures have been flat in recent days is because we have had a lack of demand, not a lack of capacity. We have obviously been through a long bank holiday weekend but the capacity is there.’

The NHS Confederation, which represents organisations across the healthcare sector, welcomed Mr Hancock’s announcement yesterday on increased testing in social care but said that the country’s testing capacity is ‘far from where it needs to be’.

Dr Layla McCay, NHS Confederation director, said: ‘The offer of more tests for social care staff is desperately needed as this sector has been suffering in silence during this pandemic.

‘But it comes as health leaders across primary, community and mental health services are continuing to experience difficulties with getting their staff the tests they need to get back to work, despite similar promises being made by government.’