Matt Hancock has resigned as Health Secretary the day after video footage emerged of him kissing an aide in his ministerial office in a breach of coronavirus restrictions.

He wrote a letter of resignation to Boris Johnson where he said the Government ‘owe it to people who have sacrificed so much in this pandemic to be honest when we have let them down’.

Images and video showed Mr Hancock in an embrace with aide Gina Coladangelo last month, and the Health Secretary was facing increasing pressure to quit over the breaking of social-distancing rules.

Mr Hancock added: ‘The last thing I would want is for my private life to distract attention from the single-minded focus that is leading us out of this crisis.

‘I want to reiterate my apology for breaking the guidance, and apologise to my family and loved ones for putting them through this. I also need (to) be with my children at this time.’

The Prime Minister said he was ‘sorry’ to receive Mr Hancock’s resignation as Health Secretary.

He said Mr Hancock ‘should leave office very proud of what you have achieved – not just in tackling the pandemic, but even before Covid-19 struck us’.

Boris Johnson added: ‘I am grateful for your support and believe that your contribution to public service is far from over.’

The 42-year-old’s resignation comes after he was accused of having an affair with lobbyist Gina Coladangelo, wife of Oliver Bonas founder, triggering a series of calls for him to step down, namely from: 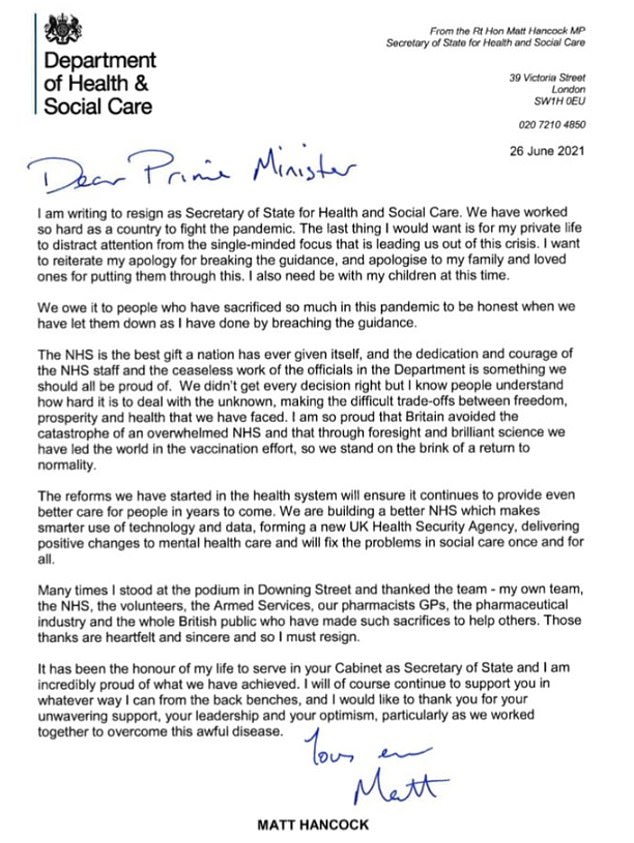 In response, the Prime Minister wrote: ‘You should leave office very proud of what you have achieved – not just in tackling the pandemic, but even before Covid-19 struck us.’

Mr Johnson had refused to sack Mr Hancock, with his spokesman saying the PM considered the matter closed after receiving the West Suffolk MP’s apology on Friday.

Mr Hancock also said in a video: ‘I’ve been to see the Prime Minister to resign as Secretary of State for Health and Social Care. I understand the enormous sacrifices that everybody in this country has made – that you have made. And those of us who make these rules have got to stick by them and that’s why I’ve got to resign.

‘I want to thank people for their incredible sacrifices and what they’ve done. Everybody working in the NHS, across social care. Everyone involved in the vaccine programme. And frankly everybody in this country who has risen to the challenges that we’ve seen over this past 18 months.

‘I’m very proud of what we’ve done to protect the NHS and the peak, to deliver that vaccine rollout – one of the fastest in the world – and I look forward to supporting the government and the Prime Minister from the backbenches to make sure that we can get out of this pandemic.

‘We’re so close to the end – and then build back better so that this country can fulfil its potential – which is so great – and I will do that with all of my heart.’