Facebook CEO Mark Zuckerberg and his wife Priscilla Chan have added another $100 million in donations to local election administrators to help fund the cost of running the November 3 election, despite lawsuits claiming the funds are being steered toward ‘Democratic strongholds’ to influence the outcome of the presidential election.

The new donations come on top of $300 million in funding that the couple announced last month, saying the money would help pay the cost of polling place rental, poll worker wages and protective equipment.

After the first round of donations, the Thomas More Society, a conservative legal group, filed lawsuits arguing that the use of private funds to run an election violates federal law and constitutes election meddling.

‘That is false,’ Zuckerberg said of the allegations in a Facebook post on Tuesday announcing the new donations, saying the funds would be distributed in a non-partisan fashion to ‘all qualified jurisdictions that apply.’ 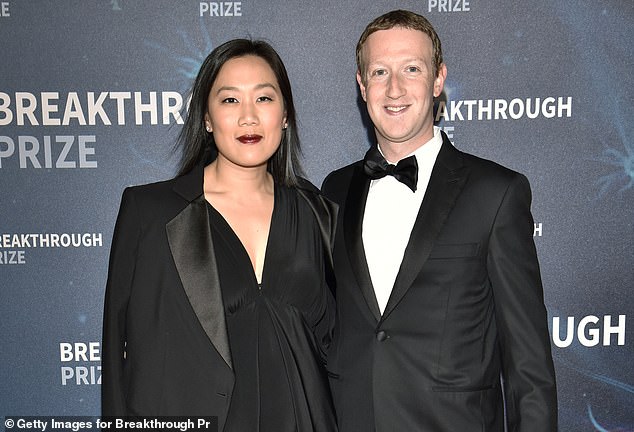 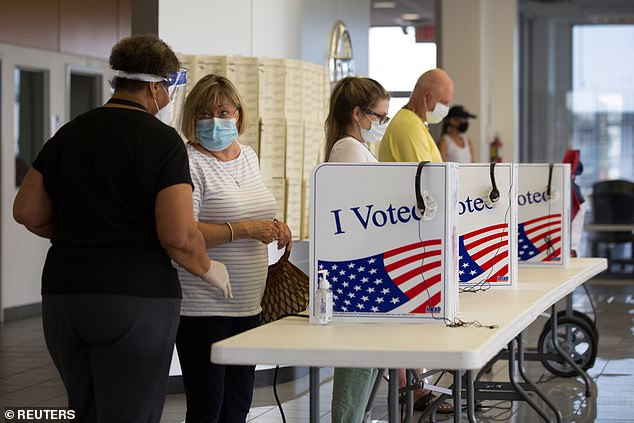 People cast their ballot for the upcoming presidential election during early voting in Sumter, South Carolina on October 9. Zuckerberg says the funds are distributed to any qualified jurisdiction that applies, but lawsuits claim they are an attempt to sway the election

Zuckerberg said the new funds would be distributed to local jurisdictions by the Center for Tech and Civic Life, which describes its mission as ‘working to foster a more informed and engaged democracy, and helping to modernize U.S. elections.’

‘We all depend on election officials to provide safe and secure voting options to the public,’ the group said in announcing Zuckerberg and Chan’s funding.

‘The expansion of our COVID-19 Response Grant program provides our country’s election officials and poll workers with the critical resources they need to safely serve every voter.’

In his Facebook post, Zuckerberg said: ‘Priscilla and I remain determined to ensure that every state and local election jurisdiction has the resources they need so Americans can vote.’

‘So far, more than 2,100 local election jurisdictions have submitted applications to CTCL for support,’ he said.

In its lawsuit, the Thomas More Society claimed that the funds are ‘intentionally targeting Democratic strongholds’ for the purpose of boosting voter turnout in those areas.

The group has filed suit in Michigan, Minnesota, Pennsylvania and Wisconsin — all key battleground states — to block the use of the funds. 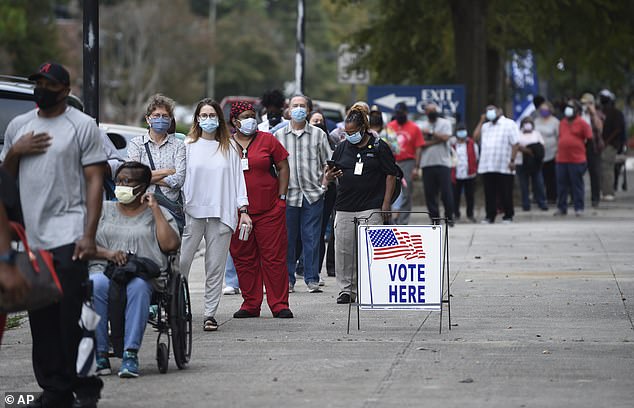 The suits allege that that the use of the funds violates a federal law known as the Help America Vote Act, which prohibits local governments from accepting private federal election grants without state legislative approval.

‘This partisan privatization of our elections can’t stand,’ said Tom Brejcha, the President of the Thomas More Society, in a statement last month.

‘Imagine a future where wealthy individuals can essentially purchase the county or city election apparatus anywhere through such creative grants to accomplish their personal objectives,’ he added.

On Tuesday, Zuckerberg blasted those claims, saying that there was no partisan motive in the distribution on the funds.

‘These funds will serve communities throughout the country — urban, rural and suburban – and are being allocated by non-partisan organizations,’ he said.

‘The Center for Tech and Civic Life shared data on the grant applications so far that shows that while a number of large jurisdictions have applied, the majority of applications have come from jurisdictions with fewer than 25,000 registered voters. All qualified jurisdictions that apply for the funds will be approved,’ Zuckerberg added.

‘To be clear, I agree with those who say that government should have provided these funds, not private citizens,’ Zuckerberg said.

‘I hope that for future elections the government provides adequate funding. But absent that funding, I think it’s critical that this urgent need is met.’ 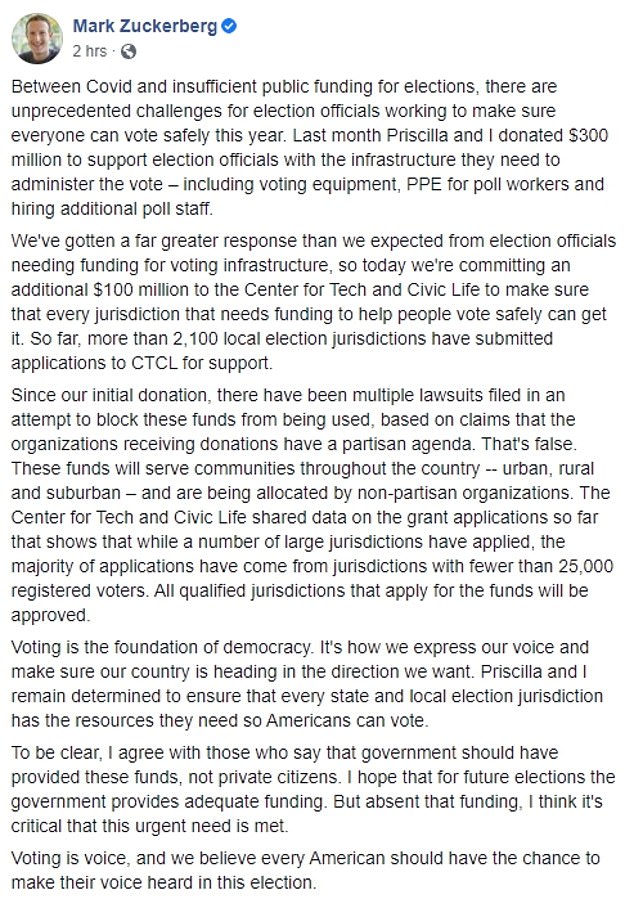