Spokane: An underground nuclear waste storage tank in Washington state that dates to World War II appears to be leaking contaminated liquid into the ground, the US Department of Energy said on Thursday (Friday AEST).

It’s the second tank believed to be leaking waste left from the production of plutonium for nuclear weapons at the Hanford Nuclear Reservation. The first was discovered in 2013. Many more of the 149 single-walled storage tanks at the site are suspected of leaking. 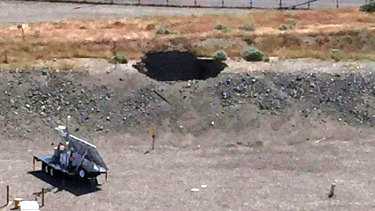 A six-metre by six-metre hole in the roof of a storage tunnel at the Hanford Nuclear Reservation. An emergency was declared in 2017 after the partial collapse of the tunnel that contains rail cars full of radioactive waste. Credit:AP

Tank B-109, the latest suspected of leaking, holds 465,000 litres of radioactive waste. The giant tank was constructed during the Manhattan Project and received waste from Hanford operations between 1946 to 1976.

The Hanford site near Richland in the southeastern part of the state produced about two-thirds of the plutonium for the nation’s nuclear arsenal, including the bomb dropped on Nagasaki, Japan, and now is the most contaminated radioactive waste site in the nation.

A multi-billion dollar environmental clean-up has been underway for decades at the sprawling Hanford site.

The Washington state Department of Ecology and the US Environmental Protection Agency were notified on Thursday that the tank was likely leaking. 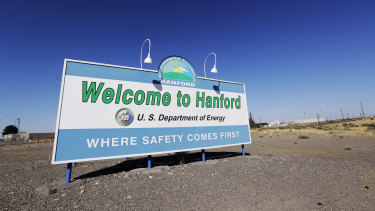 A sign at the Hanford Nuclear Reservation is posted near Richland, Washington.Credit:AP

“There is no increased health or safety risk to the Hanford workforce or the public,” said Geoff Tyree, a spokesman for the Energy Department. “Contamination in this area is not new and mitigation actions have been in place for decades to protect workers, the public and the environment.”

The tank had been previously emptied of pumpable liquids, leaving a small amount of liquid waste inside, the agency said. Systems in the area capture and remove contaminants that reach the groundwater and ensure the protection of the Columbia River, the agency said.

The leak from Tank B-109 was first suspected in March 2019, when there appeared to be a small drop in the level of its liquid waste. Monthly checks showed the level stable until July 2020, when another drop was detected, and the DOE launched an investigation.