Man, 33, died of alcohol poisoning on Christmas Day without opening his presents after drinking whisky and hot water to cure a cold, inquest hears

A man who died of alcohol poisoning on Christmas Day without opening his presents had been drinking whisky and hot water to cure a cold, an inquest has heard.

Bradford Coroner’s Court heard he drank four whiskies with hot water after waking up and feeling as though he had a cold.

A pathologist said Mr Dyson, a 6ft 5ins quality control inspector who weighed more than 20 stone, was four to five times over the drink-drive limit. 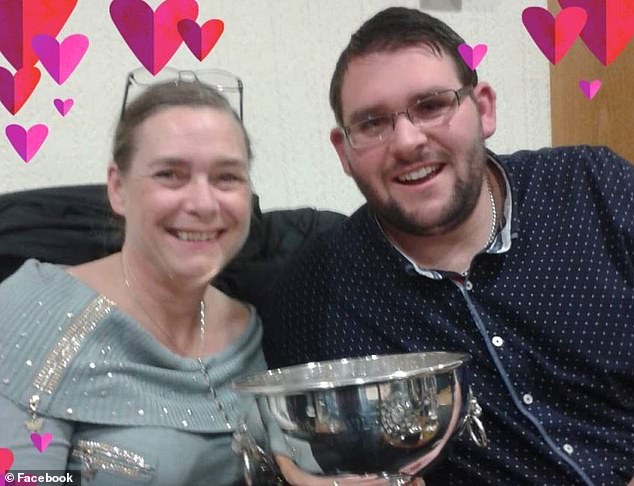 Mike Dyson (pictured with his mother, Heather), 33, died at a neighbour’s house in Almondbury, West Yorkshire, on December 25 last year

His mother, Heather Dyson, 54, said her son was a ‘typical lad’ who would enjoy going to a local pub with his mates on a weekend.

On Christmas Day she said the family went to a neighbour’s house for a drink at 1.30pm and she returned home at 2.15pm.

Her son stayed at the neighbour’s house and continued drinking.

At 7pm she went back to the neighbour’s house to check on her son who was laid on a bed in the conservatory and she presumed he was sleeping.

Later that evening the neighbour started banging on the Dyson family’s door and Mrs Dyson ran over to see how he was.

Mrs Dyson, a mother-of-four, told the inquest her son was not breathing and she moved him from his side onto his back. 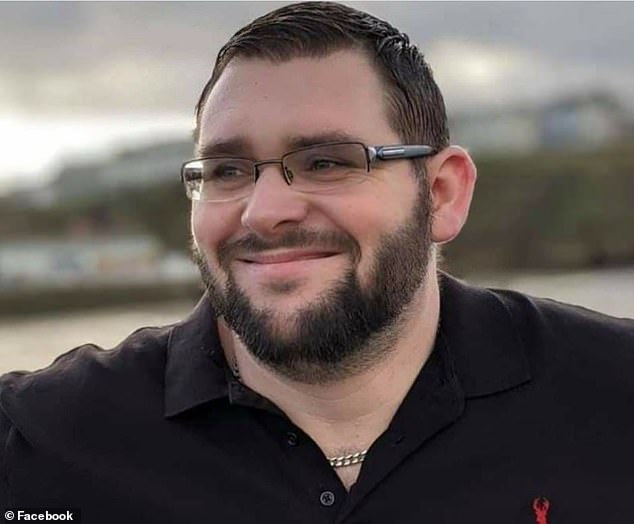 She started giving him mouth-to-mouth resuscitation while the neighbour called for an ambulance.

Despite the best efforts of medics nothing could be done to revive Mr Dyson and he died at around 8.20pm.

WHAT IS ALCOHOL POISONING?

Alcohol poisoning occurs when a person drinks a toxic amount of alcohol, usually over a short period of time.

Being poisoned by alcohol can be fatal.

If a person is poisoned by alcohol, they could:

Every time you drink alcohol, your liver has to filter it out of your blood.

Alcohol is absorbed quickly into the body but the body can only process around one unit of alcohol an hour.

If you drink a lot of alcohol over a short space of time your body will not have time to process it all.

Mike was well-known as a member of Almondbury Liberal Club and played darts at The Sun pub in Lepton.

He worked as a quality controller at Wesco Aircraft EMEA Ltd (now Incora) in Clayton West.

Dr Ali said that it would have caused ‘extreme drunkenness in a normal person’ and was at a level related to alcohol-related fatalities.

He said the death was caused by central nervous system depression, particularly breathing, due to acute alcohol toxicity.

Mrs Dyson said: ‘We had all had Christmas dinner and he had had a few drinks. Later on we found he was asleep and wouldn’t wake up.

‘My daughter Leanne and I tried bringing him around with CPR and heart massage but paramedics took over.

‘Despite their best efforts, he was pronounced dead at 8.20pm. I can’t believe he’s gone. I keep expecting him to walk through the door.

‘He used to do a funny Usain Bolt impression when he came home from work and I can’t believe he won’t be stood there doing it again and saying one of his favourite expressions: “It’ll be reet”.

‘He was a big lad, 20-plus stone and 6ft 5in tall with an infectious smile and there have been so many tributes it’s been quite overwhelming.

‘We hadn’t got round to opening the presents on Christmas Day and they were still under the tree but finally we said we will have to do it on New Year’s Day.’

She added: ‘He was a big Huddersfield Giants fan and used to love reading sporting biographies so I’d bought him one about Batley Bulldogs.

‘He never got to open it but his brother Jordan, 28, is reading it. He said he is reading it for him. He always loved that festive time of year – Christmas Day, Boxing Day, New Year’s Eve and New Year’s Day – he used to love those days the most in all the year.’

Ms Dyson said she did not know yet whether an inquest would be opened into his death.

She said she was warmed by how many people turned out as the cortège wound its way through the village and past the John Smith’s Stadium where the Giants play.

Ms Dyson, a full-time carer for her husband Stewart, said: ‘It was a shock, his death has still not properly sunk in, it came completely out of the blue.’