A Brisbane man who has spent years sending letters espousing offensive views about immigration and multiculturalism to people across Australia has defended the hate mail and says he has been using the electoral roll to obtain recipients’ home addresses.

Six years after a police investigation into the hate mail was dropped, police in Queensland are once again reviewing the letters – which are signed from “J Church” or “G Church” – and have been sent in the mail in recent months to people working in the arts, journalism, academia and politics. 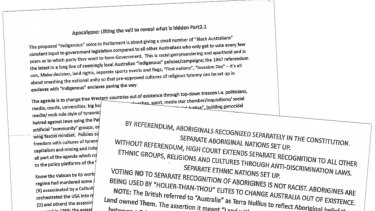 The letters have been sent to people across Australia from a Brisbane address.

The recent letters say refugee, immigration and multicultural policies are “designed to get rid of white people via demographic manipulation” and “surrender Australia to foreign cultures and peoples”. The writer criticises “white politicians, journalists, lawyers, activists” who support these policies.

Recipients have raised concerns about how their private home addresses were accessed. Several said they felt they had been targeted as they had spoken publicly about the issues raised in the letter.

The Age this week visited the return address in the Brisbane suburb of Coorparoo, which was listed on the back of envelopes sent in recent months.

The resident, Gregory John Church, confirmed he had been sending the letters. When asked how he had obtained people’s addresses, he said: “I don’t want to give away too much because I don’t want people copying me.”

He said he had sourced them using the electoral roll but would not provide specifics. “Like I said I don’t want the place to be swamped with other people – and it’s totally legal,” he said.

“It’s the only way to get past the media blockade of all the issues. And, also, an open electoral roll is a requirement of a properly-run democracy. People are free to return them and abuse me, I don’t mind.”

Mr Church confirmed he had been visited by police several times and had told them “everything I do is legal”.

An Australian Electoral Commission spokesman said terminals in AEC offices provide public access to the electoral roll. However, a limitation imposed by the Electoral Act means the right to publicly inspect the roll does not include the right to copy or record by electronic means any part of the roll.

“As noted to users on the public access terminals themselves, they are provided to the public for the purpose of monitoring the accuracy of the electoral roll for the conduct of elections,” he said.

He said there had been no recent inquiries or complaints regarding the matter. Members of Parliament and political parties also have access to the electoral roll for mail-outs.

Police in Queensland confirmed they were looking at the letters after they had been “referred further correspondence allegedly authored by a G Church”.

“The content of this correspondence is currently being reviewed. It is not appropriate to provide any further comment as this is an operational matter,” a spokesman said.

In 2015, Queensland Police dropped an investigation into the letters, saying no offence had been identified.

While the original letters investigated in 2015 mostly contained anti-Muslim content, the most recent letters from Mr Church oppose giving a voice to Indigenous Australians in Parliament, describing it as “racial gerrymandering”, “apartheid” and “smashing the national unity”.

Paula Matthewson, a political writer who worked as a media advisor to John Howard while he was prime minister, received a letter mid-last year from “G Church”, just after she had moved house.

“It wasn’t so much the content … but it was that someone had my address,” she said. “My apartment number as well as my address. The specific nature of it was what sort of confronted me.

“I live in a secure building so it’s fine but if I didn’t then I would have been a lot more alarmed that this clearly very agitated and passionate person had taken umbrage with something I had written and now knew where I lived.

“I was quite surprised … how did I end up in this person’s sights to the extent they went to the trouble of finding me?”

She did not report the letter to police but has remained concerned about how the writer obtained her address. In the end, she threw out the letter, but it continues to make her uneasy.

“Even being in a security protected building, I was very alert for a period of time afterwards and … every now and then when going to the post box I think about it.”

The Age is also aware of several people in Melbourne who have received the letters in recent weeks.

A Melbourne resident, who wishes to remain anonymous, first received a letter in 2017. They then received another last week, despite having moved homes since receiving the first letter.

“What unnerves me about this is that this person identifies particular people of interest through their online or media presentations and then accesses personal information,” the recipient said.

“The manifesto is quite odd – I do not feel personally threatened by the content, but the fact that it is addressed to my personal residence is concerning.”

The recipient said the latest letter included the original material sent the first time, but with additional content about Indigenous Australians having the right to their own voice and self-determination.

“I think it’s really odd [he] can track us, find our personal address and send information to our homes. I’m not worried about my safety but there is potentially a cyber breach happening somewhere where this person is able to access personal information. I think that’s a problem.”

In 2015, more than two dozen people said they had received the unwanted propaganda, including a top economist’s wife, former election candidates, community activists and even those with no public profile.

Victoria Police said it was aware that letters had been sent to Victorian addresses by this person previously, but had not received any reports related to more recent instances.

“The man is known to police and resides interstate,” a police spokeswoman said.

Both police services encouraged members of the community who receive any similar letters to report them.

If you have received a letter, you can report to Queensland Police Service or Victoria Police by calling 131 444.