Pakistan’s Supreme Court has ordered the British-born man acquitted of the beheading of American journalist Daniel Pearl in 2002 off death row and moved to a so-called government ‘safe house’.

Ahmed Omar Saeed Sheikh, who has been on death row for 18 years, will be under guard and will not be permitted to leave the safe house, but his wife and children will be allowed to visit him.

‘It is not complete freedom. It is a step towards freedom,’ said Sheikh’s father, Saeed Sheikh, who attended the hearing.

The Pakistani government has been scrambling to keep Sheikh in jail since a Supreme Court order last Thursday upheld his acquittal over Pearl’s death, generating expressions of outrage from the journalist’s family and the US administration. 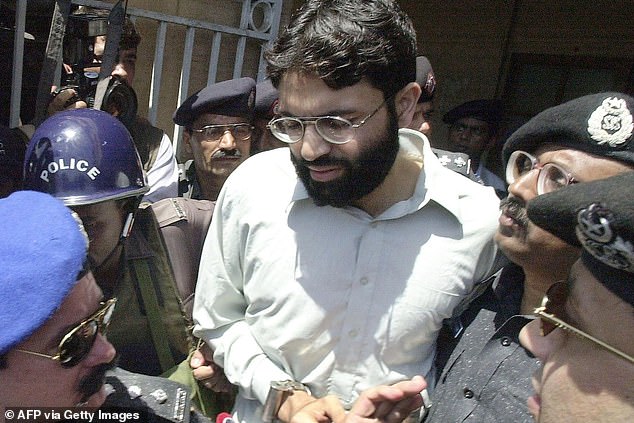 Pakistan’s Supreme Court has ordered the British-born man acquitted of the beheading of American journalist Daniel Pearl in 2002 off death row and moved to a so-called government ‘safe house’. Ahmed Omar Saeed Sheikh, who has been on death row for 18 years, will be under guard and will not be permitted to leave the safe house, but his wife and children will be allowed to visit him. Pictured: Sheikh (centre) is escorted from a Karachi court in 2002 [File photo] 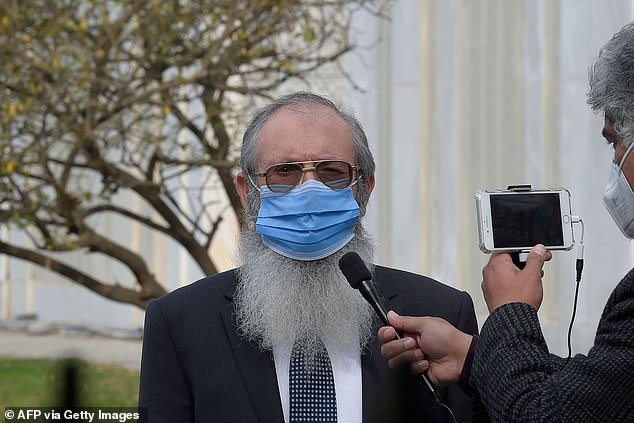 Sheikh’s father Saeed Sheikh (pictured), who attended the hearing, described the decision to move his son to a safe house as ‘a step towards freedom’ 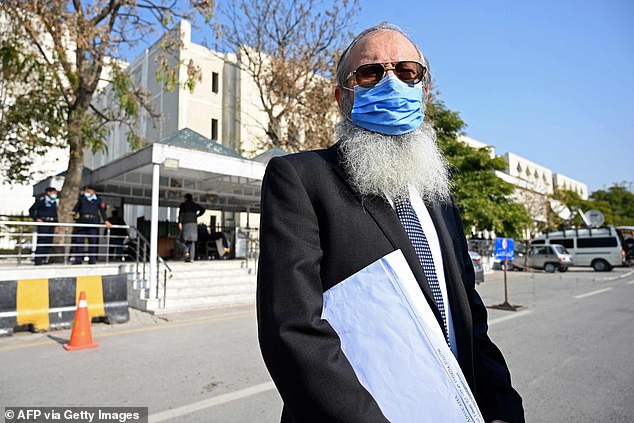 The Pakistani government has been scrambling to keep Sheikh in jail since a Supreme Court order last Thursday upheld his acquittal over Pearl’s death, generating expressions of outrage from the journalist’s family and the US administration. Pictured: Sheikh’s father, Saeed Sheikh, leaves the Pakistani Supreme Court on Monday

In a final effort to overturn Sheikh’s acquittal, the Pakistan government, as well as the Pearl family, have filed an appeal to the Supreme Court to review the decision to exonerate Sheikh of Pearl’s murder.

The Pearl family lawyer, Faisal Sheikh, earlier said a review has a slim chance of success because the same Supreme Court judges who ordered Sheikh’s acquittal sits on the review panel.

The US government has said that it would seek Sheikh’s extradition if his acquittal is upheld.

Sheikh has been indicted in the United States on Pearl’s murder as well as over a 1994 kidnapping of an US citizen in Indian-ruled Kashmir. The individual was eventually freed.

The order sending Sheikh to a safe house would seem to be a concession to the federal government, as well as the government of southern Sindh province where Karachi is the capital.

In the government-run safe house, Sheikh will be under a 24-hour guard – often military personnel – and will not be allowed to leave. Pakistan’s security establishment has several such facilities across the country.

Pearl disappeared on January 23 2002, in the port city of Karachi where he was investigating links between Pakistani militant groups and Richard C Reid, dubbed the ‘shoe bomber’ after his attempt to blow up a flight from Paris to Miami with explosives hidden in his shoes.

Pearl’s body was discovered in a shallow grave soon after a video of his beheading was delivered to the US consulate in Karachi.

Sheikh had long denied any involvement in Mr Pearl’s death, but Pakistan’s Supreme Court last month heard that he acknowledged writing a letter in 2019 admitting a minor role – raising hopes for some that he might remain behind bars.

The Pentagon in 2007 released a transcript in which Khalid Sheikh Mohammad, the alleged mastermind of the 9/11 attacks on the United States, said he had killed Pearl.

The case against Ahmed Omar Saeed Sheikh appears to have fallen apart because of the contradictory evidence produced during his original trial in 2002 and the decision by the prosecution at the time to try him and three other accused co-conspirators together.

According to the Pearl family lawyer, Faisal Siddiqi, this means that doubt about the guilt of one translates into a doubt about all.

Washington has expressed outrage, promising to pursue extradition of Sheikh on two separate US indictments against him.

For its part, Pakistan’s government has thrown up every legal hurdle it could to keep Sheikh in jail following his acquittal last April by a lower court.

WHAT LEGAL OPTIONS REMAIN FOR PAKISTAN?

The provincial Sindh government took the last remaining legal step by filing a review petition on Friday with the Supreme Court.

It has not changed the outcome, but it could give the provincial government legal cover to keep Sheikh in jail in the port city of Karachi, the capital of the southern Sindh province.

It already defended itself against earlier charges of contempt for previously refusing to release him, ignoring an order from a lower court.

Pakistan also might consider charging Sheikh in connection with allegations that he possessed nine different SIM cards for phones he used to contact friends, including some in Britain, in 2009 while on death row.

There have been suggestions in the local media in Pakistan that he used the SIM cards to call for assistance to break him out of the Hyderabad jail where he’d been on death row since his 2002 conviction.

He was moved to a Karachi jail after his April acquittal.

WHAT OPTIONS ARE OPEN FOR THE US?

There are a couple of hurdles to extradition: Pakistan, like the United States, has a double jeopardy rule that prevents a person from being tried for the same offence twice.

The US also does not have an extradition treaty with Pakistan, although Islamabad has in the past bypassed legalities to send suspects to the US, including Khalid Sheikh Mohammad, the alleged mastermind of the 9/11 terrorist attacks.

Mohammed has been in US custody on Guantanamo Bay since his arrest in Pakistan in March 2003. He also confessed that he killed Pearl himself, but has not been charged in the Wall Street Journal reporter’s death.

The most recent example of Pakistan allowing someone accused of a crime to leave for the US was in 2011, when Raymond Davis, an American contractor at the US Embassy, returned home after gunning down two people in the eastern city of Lahore.

He said he opened fire because he felt threatened.

The case could be one of the first major tests for President Joe Biden and US-Pakistan relations have historically been tumultuous.

Pakistan likely will play a crucial role in the Biden administration’s attempts to navigate the US withdrawal from Afghanistan. Pakistan was seen as key to getting the Taliban into negotiations with the Kabul government, even if those talks have been excruciatingly slow and until now have garnered little success, even as violence has spiked.

Mohammad Amir Rana, executive director of the Pakistan Institute of Peace Studies, said Sheikh’s acquittal has created a conundrum for both countries.

Until now, Pakistan has taken every legal step to keep Sheikh in jail but sending him to America could rile up opposition at home, Rana explained.

For America, snubbing Pakistan just when the two have agreed on exchanging intelligence on terror financing and the road to a political settlement in Afghanistan is at a critical juncture, could result in setbacks on both fronts.

WHO IS AHMAD SAEED OMAR SHEIKH?

A British national of Pakistani heritage, Sheikh lived a relatively privileged life in Britain, where he attended the prestigious London School of Economics.

It appears he was inspired to jihad by the conflict in the former Yugoslavia in the 1990s, relentless attacks on Muslims in Bosnia at the time, their treatment in Bosnian Serb camps and what Sheikh perceived as Western indifference to their plight.

He traveled to Bosnia and later joined Harakat-a-Ansar, a Pakistan-based militant group that was declared a terrorist group by the US in 1997 and later became known as Harakat-ul-Mujahedeen.

He also travelled to the Indian-ruled section of Kashmir to wage war against India in the Muslim-majority region. The disputed Himalayan region is split between India and Pakistan and claimed by both in its entirety.

Sheikh’s strength seemed to be his ability to use his British upbringing to entice foreigners to trust him. That ability led to the kidnapping of the American tourist in 1994, and according to some evidence, eased any concerns Pearl might have had as he sought to track militants in Pakistan.

Sheikh was arrested by India after the 1994 kidnappings but was among the terror suspects freed by India on December 31, 1999 in exchange for the hostages on an Indian Airlines aircraft that was hijacked and taken from Nepal to then Taliban-controlled Afghan city of Kandahar.