Paris: French President Emmanuel Macron said it was imperative that parliamentary elections commencing this weekend resulted in a “strong and clear” majority for his political bloc to be able to implement pro-business reforms and avoid a “French disorder”.

Macron said any breakthrough for far-left and far-right parties in the elections on June 12 and June 19, would add further uncertainty to a political backdrop marked by Russia’s invasion of Ukraine and concerns over rising inflation.

“Nothing would be more dangerous than adding a French disorder on top of a world disorder, as proposed by extremists,” Macron said, during a visit to the southern French region of Tarn. 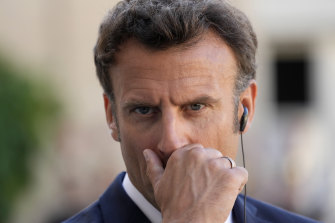 French President Emmanuel Macron listens to an interpreter at a press conference.Credit:AP

He used his trip to Tarn to warn against the challenges faced to his “Ensemble” centrist bloc from both the far-left party, which has allied with the traditional left-wing Socialist Party, and from far-right parties such as Marine Le Pen’s Rassemblement National and Eric Zemmour’s “Reconquest” group.

Two polls showed earlier this week that Macron’s centrist camp was not guaranteed to win an absolute majority in the parliamentary elections.

The left-wing ‘Nupes’ coalition led by hard-left veteran Jean-Luc Melenchon, who leads a coalition of socialists, communists and greens, is second in polls, but the conservative Les Republicains could end up being kingmakers, if Macron’s Ensemble alliance falls short of an absolute majority.

Melenchon wants to be prime minister and force the French president into an uneasy power-sharing alliance. 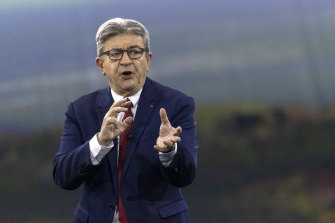 Jean-Luc Melenchon lost the race for president, now wants to be prime minister to Emmanuel Macron under a coalition government.Credit:AP

The latest IFOP poll, on Thursday, showed Nupes could win between 190 and 235 seats out of the 577 total, the London Telegraph reported. That could prevent Macron from retaining his majority of 356 seats.

Failure to get an absolute majority would mark a major setback for the centrist. It would force him to broaden his alliance, which in turn could complicate policy decisions.

Macron was re-elected as president in April but he needs a majority in the lower house of parliament – the Assemblee Nationale – to implement his reforms aimed at strengthening the economy, such as proposed changes to pensions and cutting taxes.

A minority cabinet or coalition government would be an unusual scenario for modern-day France. The Fifth Republic, a period that started with direct elections for president under Charles de Gaulle, was designed to avoid unwieldy coalitions.