A ‘hero’ family fog chased off a group of four machete-wielding home invaders who broke down the door to her family’s home.

When father-of-four Paul Davis’s house in Birmingham was attacked by the hooded thugs, his devoted Staffordshire bull terrier Macey didn’t think twice about ‘laying her life on the line’ for her family.

CCTV footage captures a group of men surveying the house and looking in windows before one charges forward to break down the door.

With two swift kicks, the door is brought down and a second man rushes in, pulling out a machete.

But seven-year-old Macey and French bulldog Bruce, three, are not about to let them enter freely. 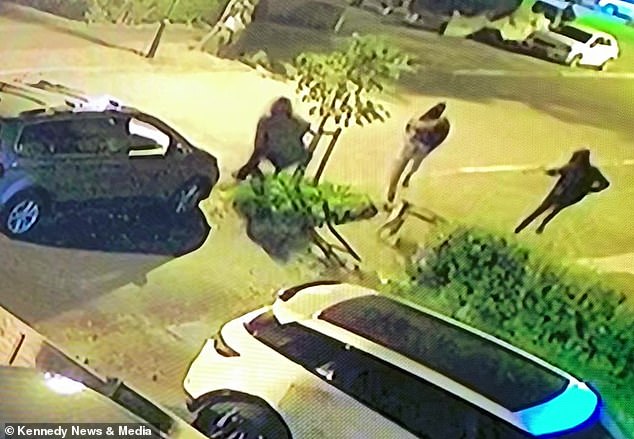 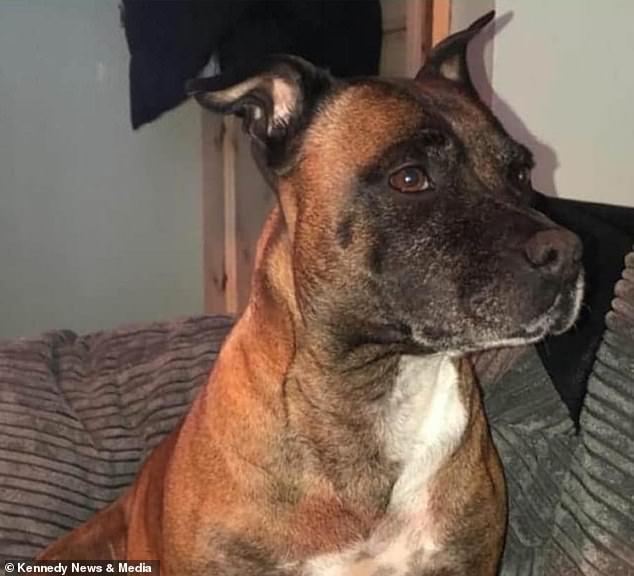 When father-of-four Paul Davis’s house was attacked by the hooded thugs, his devoted Staffordshire bull terrier Macey (pictured) didn’t think twice about ‘laying her life on the line’ for her family 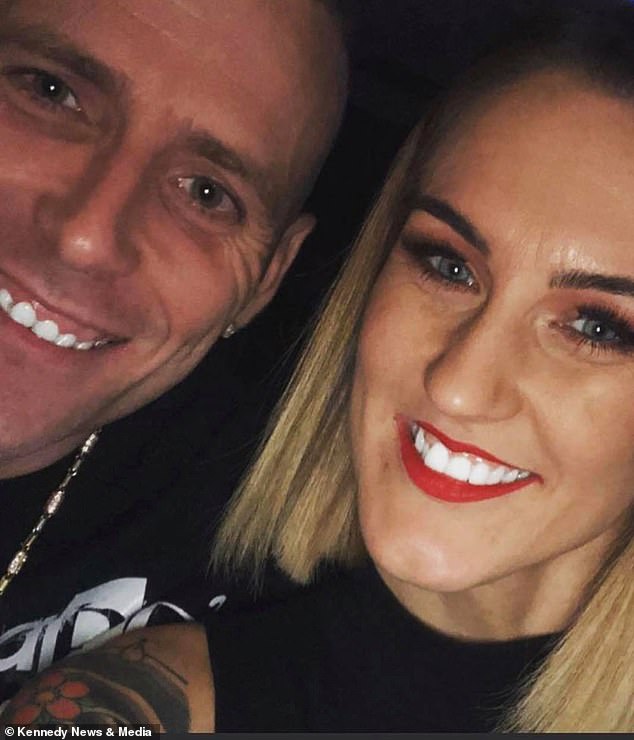 Mr Davis lives with his fiancée Jenna Byrne (pictured together), also 36, and his three daughters 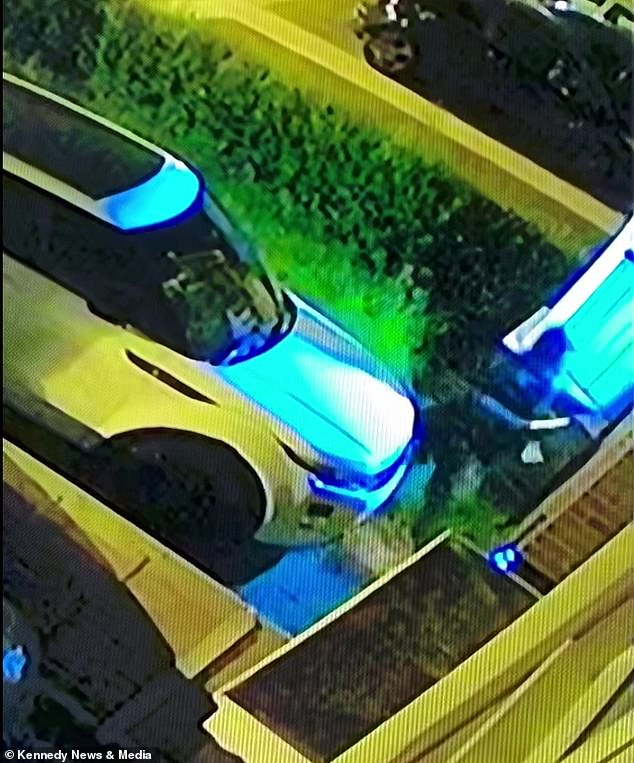 With two swift kicks, the door is brought down and a second man rushes in, pulling out a machete (pictured)

The man backs up out of the house when he realises the dogs are there before sending his horrifying weapon crashing down on Bruce.

Macey fights back and chases him outside before sprinting down the street after the men who flee in fear.

Poor Bruce was left with a gash on his back in the attack and Macey was kicked as she pursued the men along the road.

Mechanic Mr Davis, 36, had no idea what was going on when the noise of the attack awoke him in the middle of the night on July 30. 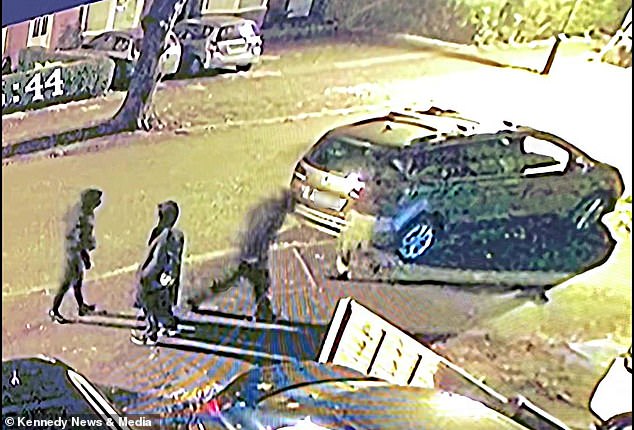 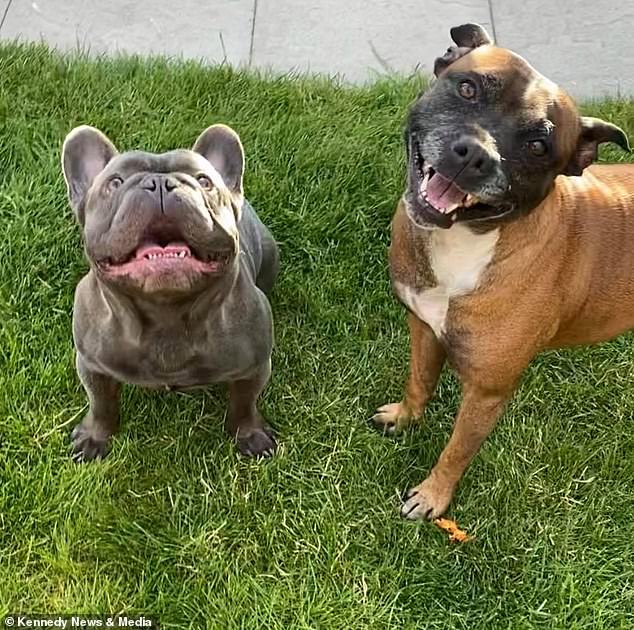 Seven-year-old Macey (right) and French bulldog Bruce, three, (left) were not about to let them enter freely

But as he jumped out of bed to check, the banging finished and Paul discovered his faithful pooch staring up at his window from the driveway below.

Mr Davis, who lives with his fiancée Jenna Byrne, also 36, and his three daughters, said: ‘Macey is our absolute hero.

‘I’d always questioned what she would do if we were attacked but she darted past me.

‘It was like she looked at me and decided “dad isn’t going, I am”. She laid her life on the line for us.

‘I think she saved my life that night and probably that of Jenna and the girls too. When I saw her sat there looking up at the bedroom like “I got them dad”, I was gobsmacked.

‘She’s had lots of treats. She slept in the bed with me last night, we bought her a dog cake and a bottle of dog beer.

‘She’ll keep getting them for the rest of her life. We can never repay her for what she did.’

Mr Davis believes the house was targeted due to the Land Rover on their driveway, but because of Macey’s fearless intervention, the only damage caused to the family home was a smashed front door and some broken brickwork around it. 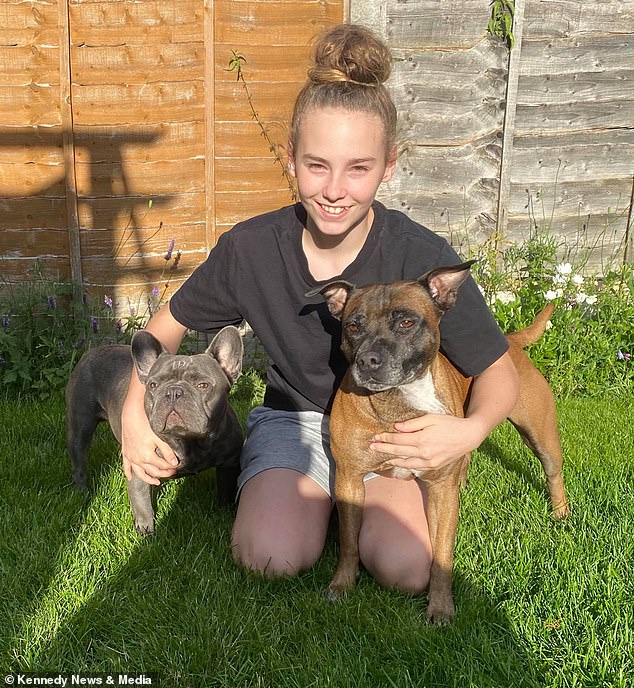 Mr Davis believes the house was targeted due to the Land Rover on their driveway, but because of Macey’s fearless intervention, the only damage caused to the family home was a smashed front door and some broken brickwork around it. Pictured: Mr Davis’s daughter Kayli with their dogs 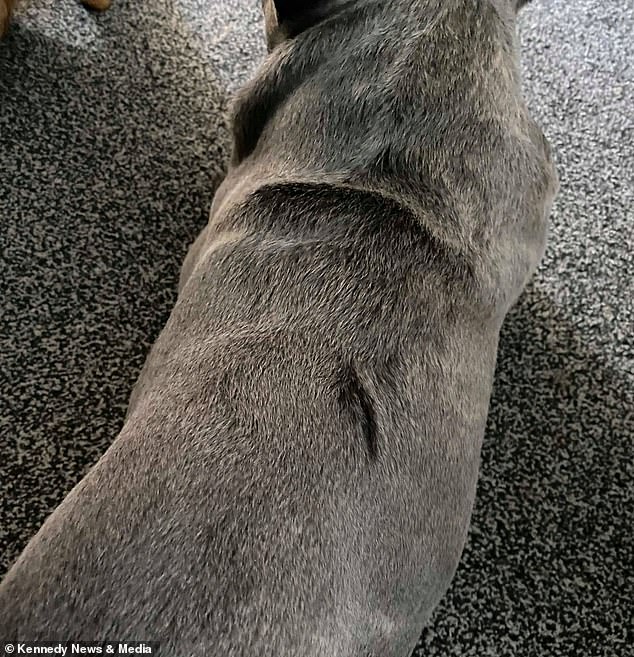 In their escape, the culprits dented the wing mirror of a mobility car used to transport youngest daughter Klara, seven.

There may not be much physical damage done to the house, but Mr Davis and his girls Kayli, 15, Kortney, 12, and Klara are all emotionally scarred by the attack.

Son Jay, 17, was out of the house when the incident happened.

Mr Davis said: ‘We’re all still really shaken up. The girls don’t want to stay in the house and that’s the hardest part.

‘The thing that really affects me is how this has and will continue to affect my kids. Kortney has gone to stay at my mum’s for now. Kayli hasn’t been able to sleep.

‘I haven’t eaten since. My belly is rumbling but I’m not hungry.

‘I just don’t want this happening to any other families. A couple more houses were tried by them on our street, one on our side of the road and another on the opposite side. 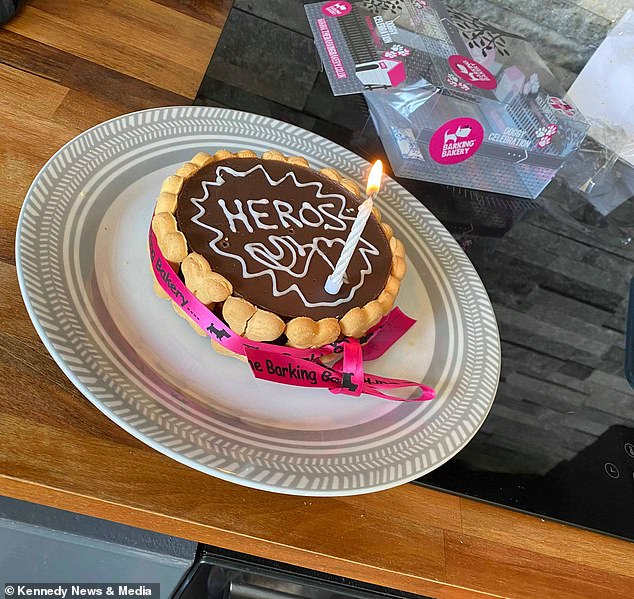 ‘We were all fast asleep and I must have woken up on the first kick. I heard the end of it but just thought it was a big bang.

‘So I looked out of the window as a first reaction and all I saw was that shiny machete in the air. All I could think was I need to look after Jenna and the girls.

‘I felt slightly better knowing the girls were locked in their rooms but then I realised I had no idea what the scumbags were going to do.

‘I knew I’d seen a few of them so I just stood three steps down from the top of the stairs and stayed there for a minute but it felt so much louder.

‘When I hadn’t heard any banging downstairs, I peeked out of the window to see if they were still outside. I couldn’t see anything even when I looked up and down the road.

‘Jenna had a panic attack and Kayli was on the phone for an ambulance.

‘Bruce must have run downstairs first. He got hit with the knife properly and has a gash on his back.

‘Macey moves so fast I don’t think they hit her with the machete, but they did kick her across the road.’

Despite the emotional effects, Mr Davis and his family know that Macey will always be prepared to protect them.

Ms Byrne said: ‘I just love the fact you can see Macey looking up at the window all proud like “I did it dad, I got rid of them”.

‘The other angle is great because you can see her chasing them off. Even from something so horrible, it was quite funny to see her go for their ankles.

‘Staffies do get a lot of stick these days and it can be hard because people try to make them a bully breed.

‘It was just so amazing to see what she did for us. For her to sit outside and wait to come back in like that, it just shows how good a dog she is.

‘She’s such a big part of our family and just a really lovely dog with the kids. She wouldn’t bite anyone even if we told her to.

‘There’s no training for her to have done what she did, it was just her natural instinct to protect us.’