Splendiferous! London mews where Roald Dahl wrote Matilda and The Witches hits the market for £3.95m

The former home of Roald Dahl in south London, where he wrote Matilda and The Witches, is up for sale for £3.95million.

The home is for sale in Turnchapel Mews, a private gated spot with a pretty 19th-century cobbled courtyard in between Clapham Common and Battersea.

This was where the late children’s favourite storyteller was inspired to create his tales, including The Witches which was published in 1983 and Matilda, published five years later. 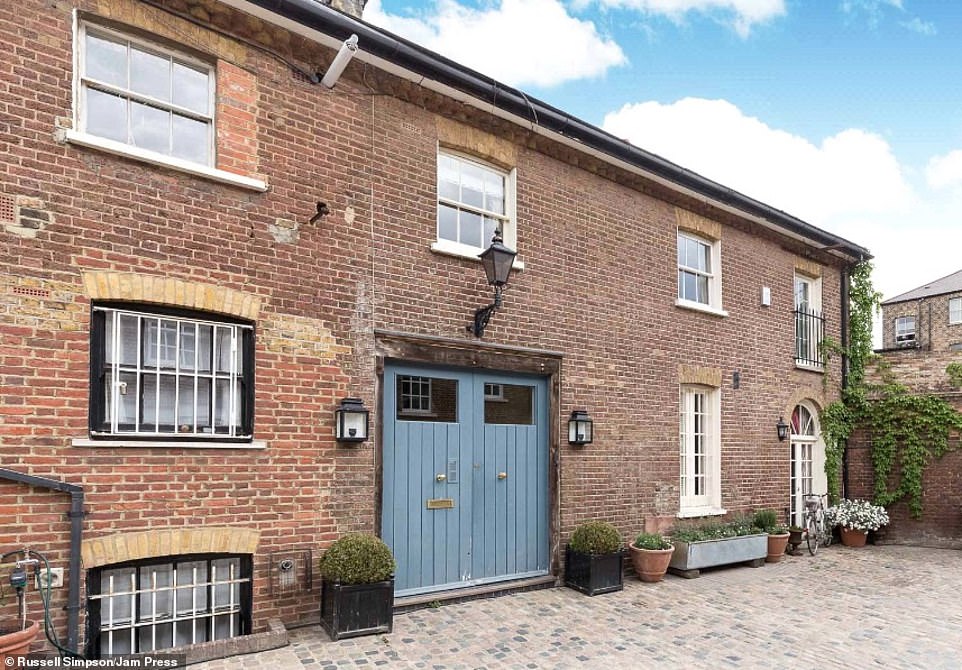 The former home of Roald Dahl, located in Turnchapel Mews in between Clapham Common and Battersea in south London, has been put up for sale for £3.95m 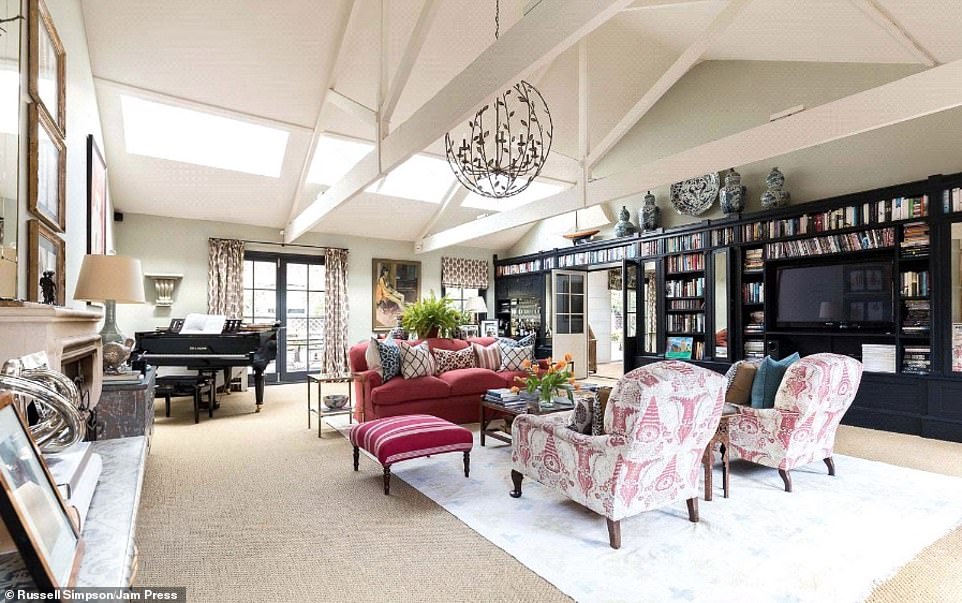 One of the drawing rooms in the house, with two pink and white chairs opposite a dark red sofa in the middle of the room, with a piano to the left of the shot and a built-in TV on the right 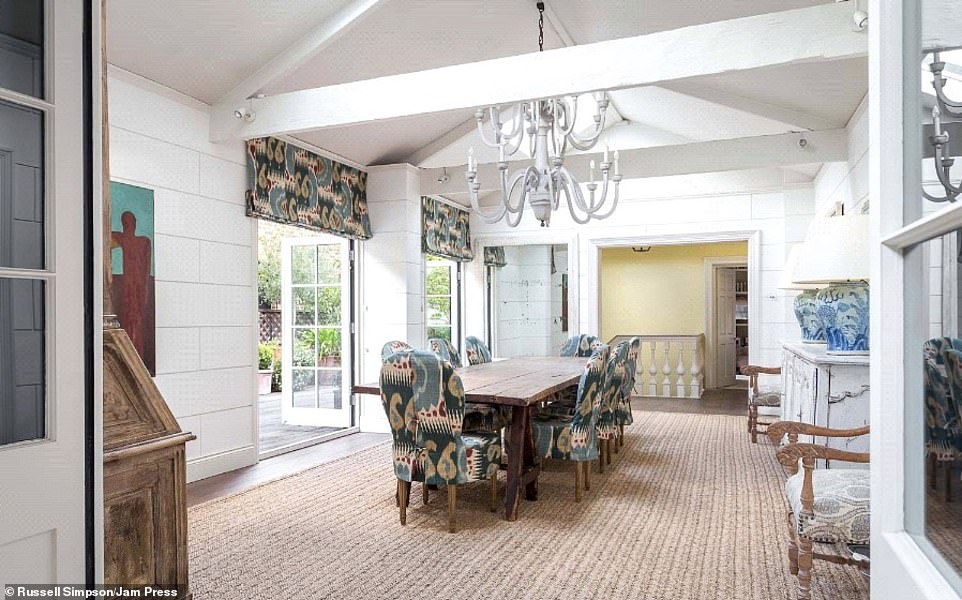 A dining room which has a wooden table in the middle and eight chairs on the outside and two chairs either side of a cabinet on the right, with doors which lead out to the back terrace area 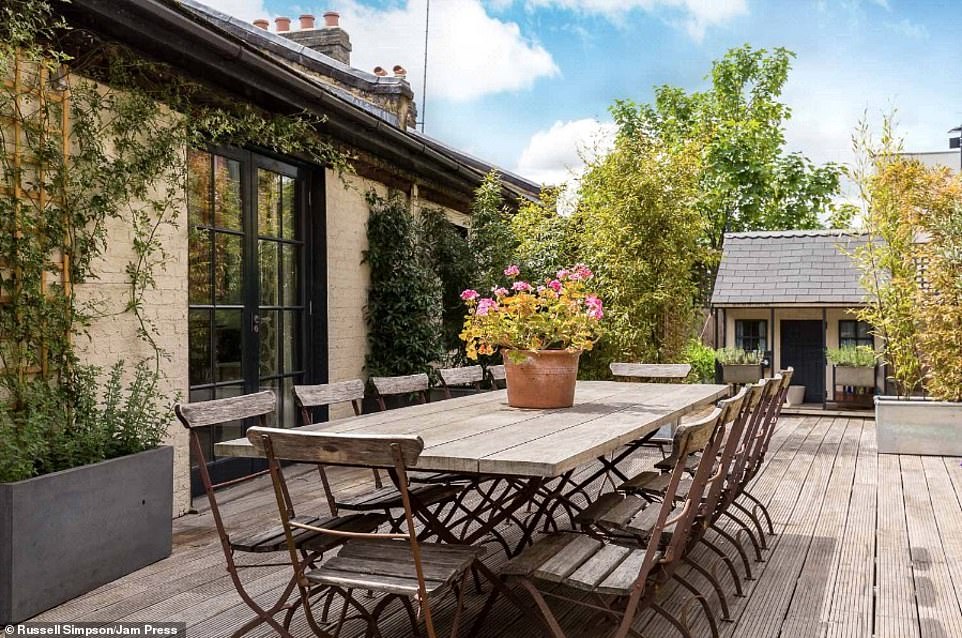 The 90ft terrace area at the back of the house with a wooden table in the middle, a plant on top of the table and twelve chairs round the table

It’s an unusual apartment, spread across the top floor of four terrace houses and the ground floor of one and in total it covers 4,077 square feet.

Beneath the loft-style ceiling are five bedrooms, three bathrooms and a spacious, light-filled dining and drawing rooms, along with a 90ft terrace.

It is for sale at £3.95 million with estate agency Russell Simpson subject to contract on their website.

Dahl, whose books have sold more than 250 million copies worldwide, actually grew up and went to school in Weston-Super-Mare in Somerset 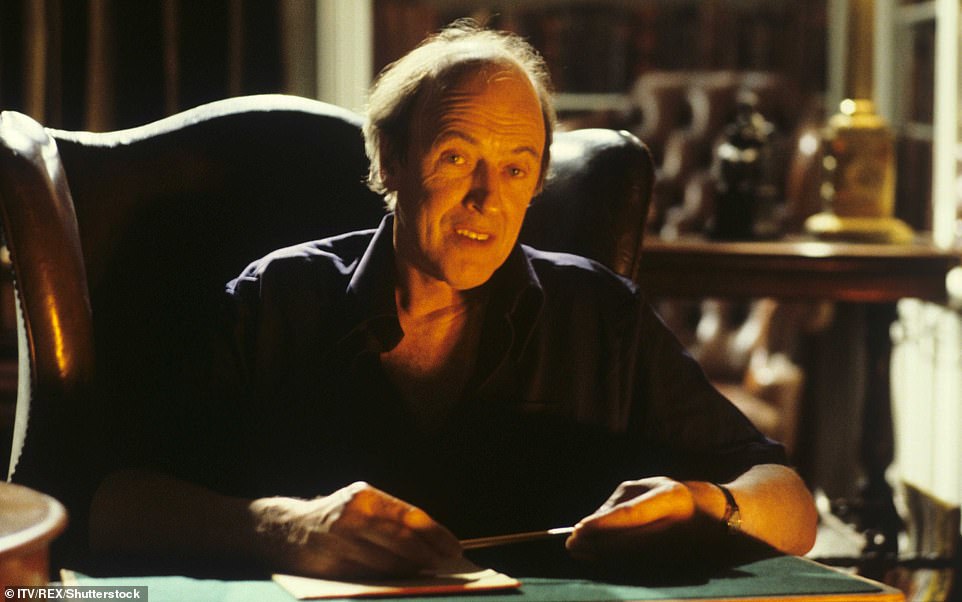 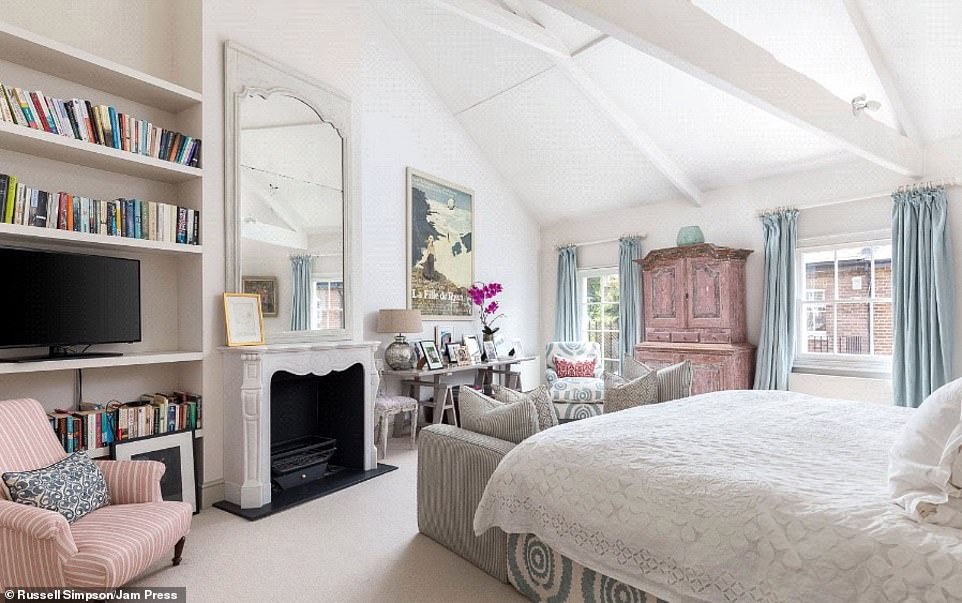 One of five bedrooms in the apartment with a pink and white stripy chair in the corner, a fireplace with a mirror above it and two windows 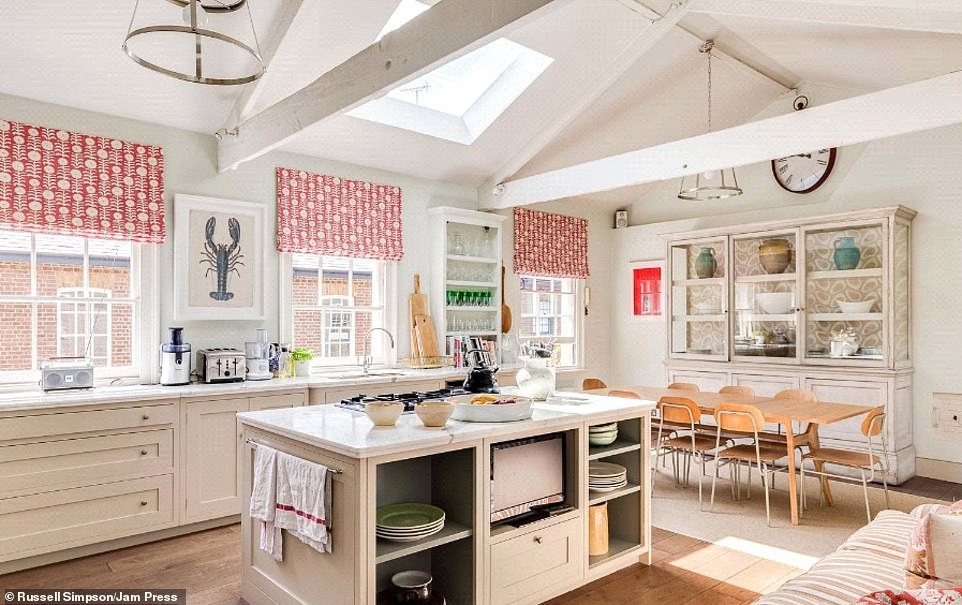 The kitchen of the apartment, decorated with red and white blinds, three windows and six wooden chairs to the right outside a table

He spent the latter years of his life in the property though, and wrote Matilda there which in 2012 was ranked number 30 among all-time children’s novels in a survey published by School Library Journal.

However, just two years after that book was published, Dahl died in 1990 at the age of 74 of a rare cancer of the blood.

Other well-known novels from the author include Charlie and the Chocolate Factory, the BFG and James and the Giant Peach. 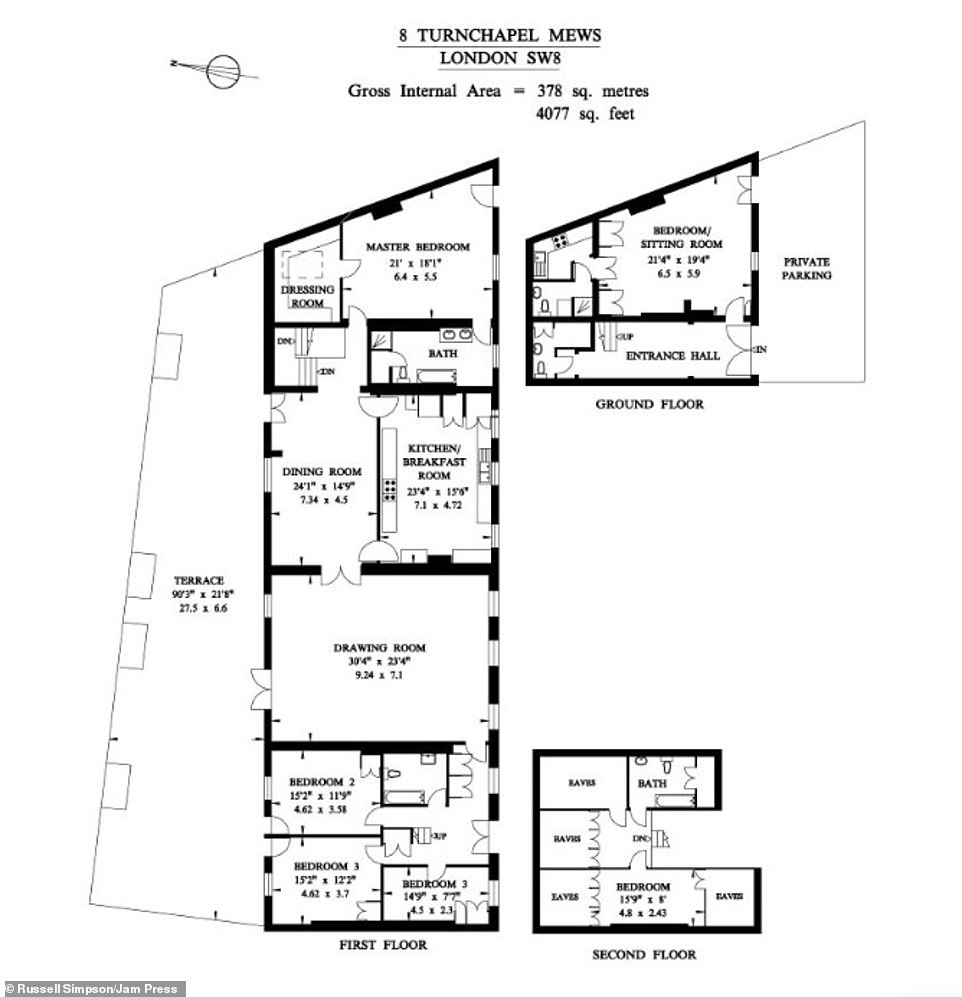 The floor plan of the property shows the location of the five bedrooms, three bathrooms and the dining and drawing rooms 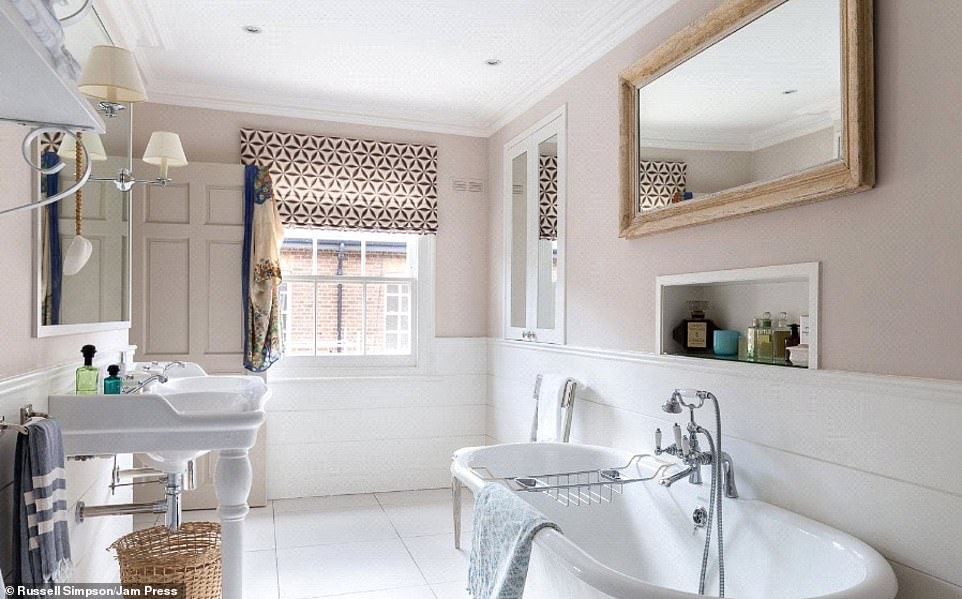 One of the three bathrooms in the house, fitted with a bath,  a landscape mirror above it and another mirror above the sink 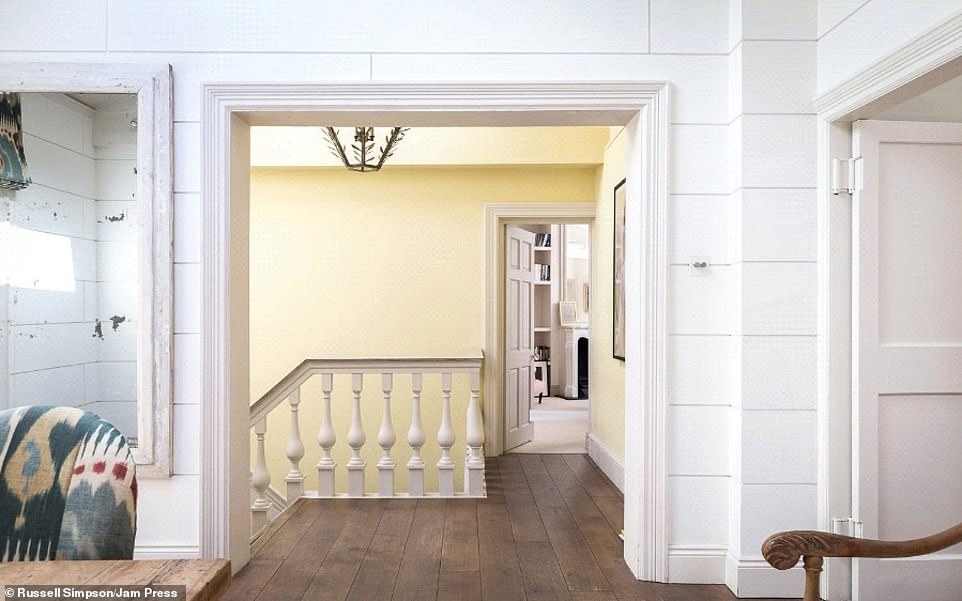 A view of the flight of stairs in Dahl’s former home, which is a private gated spot near Clapham Common in south London