London Fashion Week organisers are facing a backlash after unveiling a controversial credit company as its headline sponsor.

More than 60 MPs are demanding that debt warnings are displayed alongside promotions for ‘buy now, pay later’ firm Clearpay at the event which starts today.

It comes after City watchdog the Financial Conduct Authority this month warned that the industry urgently needed to be regulated to protect shoppers from debt crisis.

Campaigners fear young women in particular are at risk of being lured into spending more than they can afford with buy now, pay later options now touted by most major fashion retailers.

It means bills are delayed and instead split into manageable chunks without facing interest. But there are no credit checks and borrowers can face mounting charges if they miss payments.

The industry has boomed online in the pandemic with more than five million shoppers spending a total £2.7billion using the scheme since last March.

The letter, which was signed by more than 60 MPs last night, said: ‘London Fashion Week should be an opportunity to showcase the creative talents of our country; yet this relationship has the potential to overshadow such a platform.’ 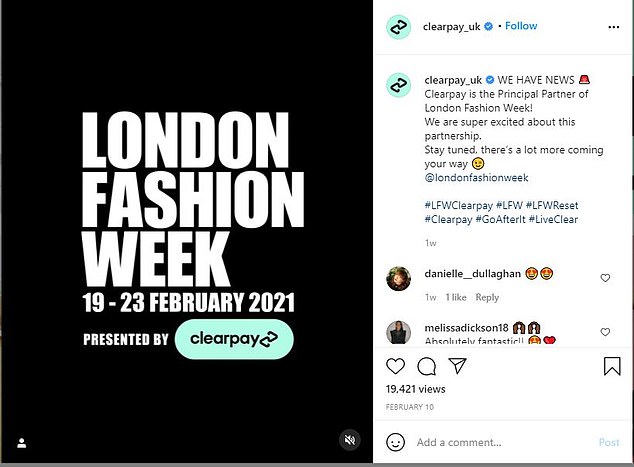 Firms such as Clearpay and Klarna, which has eight million UK customers, have partnerships with retailers such as H&M and Marks and Spencer.

Miss Creasy said: ‘There is no such thing as responsible buy now, pay later lending in the UK at the moment because it is recognised that it needs to be regulated… We are asking British Fashion Council to be responsible to provide warnings to consumers about this type of credit.’

The Treasury has said it will soon bring in legislation which would mean lenders have to carry out credit checks before handing out loans.

A British Fashion Council spokesman said last night: ‘Clearpay has always supported fit-for-purpose regulation that recognises the diversity of the industry and desire from consumers for flexible payment options that don’t trap them in long-term debt.’

Clearpay said its partnership ‘is our way of showing we support a growing UK economy’.