The mayor of Leicester has refused to tear down a statue to Mahatma Gandhi who has been accused of being a ‘fascist, racist, sexual predator’.

An online petition, which has gathered more than 6,000 signatures, wants the local authority to remove the statue to the Indian independence leader who preached non-violence.

The statue was erected following a fundraising effort in the local community in 2009.  Leicester’s mayor Sir Peter Soulsby said he has no intention of removing the statue. 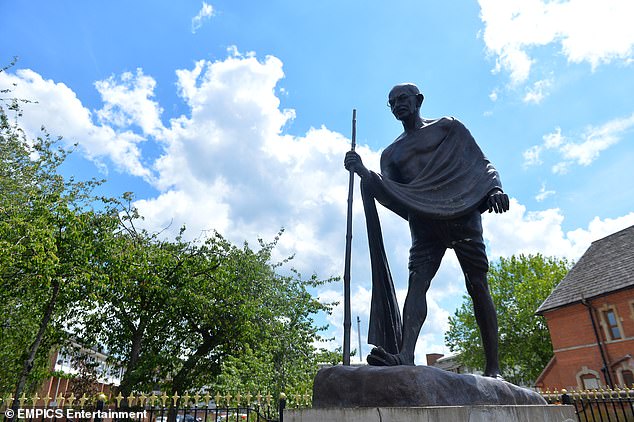 A petition on Change.org has called for the removal of a statue to Indian independence leader Mahatma Gandhi, which was erected in 2009 following a campaign and fundraising drive 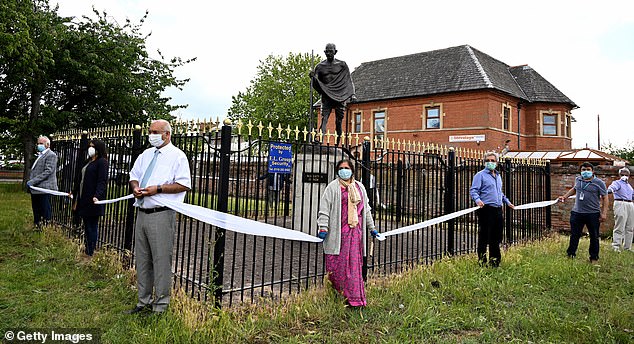 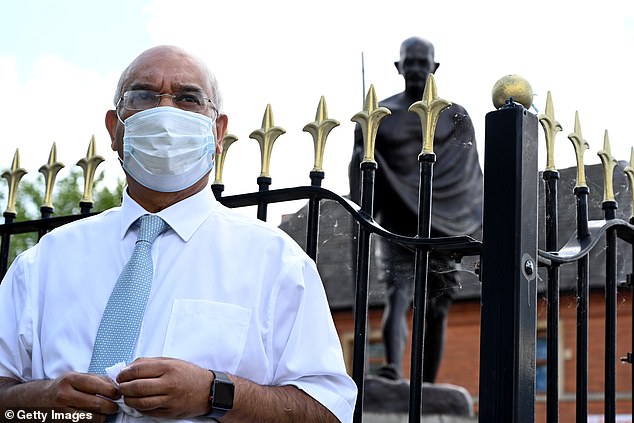 Among those defending the statue was former Labour MP Keith Vaz, who was involved in efforts to commission the memorial

The petition on Change.org, states: ‘Gandhi, is a fascist, racist and sexual predator.

‘For years he has been idolised and taught in school curriculum. For a lot of people in my community, he has bought inconsolable suffering against my people.

‘As a result, I do not wish to see a statue and praise of that kind of character.’

Sir Peter said: ‘There’s no prospect at all of us removing it. And I’m not sure we’d have the power to take it down anyway.

‘It was a community effort to put it there to celebrate someone who, for all of us, was a very inspirational leader in India who inspired the rest of the world with his creed of non-violence.’ 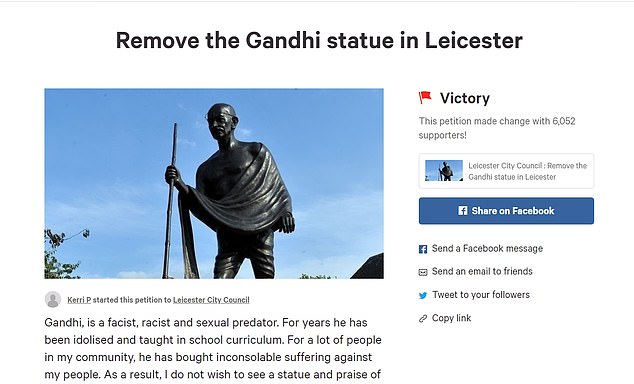 The campaign on Change.org has received more than 6,000 signatures from people seeking Gandhi’s removal

Was Gandhi racist? Anti-colonial nationalist was criticised for his views on black people during his two decades spent in South Africa

The controversy surrounding Mahatma Gandhi’s views on race stem from his time in South Africa, where he lived for more than two decades between 1893 and 1914.

In their 2015 book The South African Gandhi: Stretcher-Bearer of Empire, South African academics Ashwin Desai and Goolam Vahed argued Gandhi viewed racial politics in much the same way as the white colonisers who occupied the country at the time.

Gandhi wrote to the Natal parliament saying that a ‘general belief seems to prevail in the Colony that the Indians are a little better, if at all, than savages or the Natives of Africa’ in 1893. 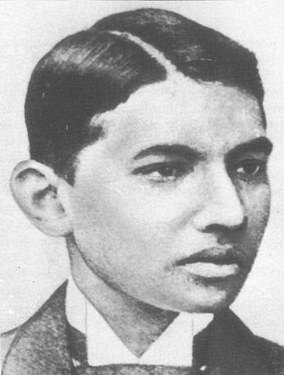 He referred to black Africans as Kaffirs, a derogatory term in a 1904 letter to a health officer in Johannesburg about an area of the city where Indians and Africans lived together.

Gandhi wrote: ‘About the mixing of the Kaffirs with the Indians, I must confess I feel most strongly.’

In 1905, Gandhi wrote that a plague in Durban would persist as long as ‘Indians and Africans were being “herded together indiscriminately at the hospital’.

Writer Ashwin Desai said: ‘To the extent that he wrote Africans out of history or was keen to join with whites in their subjugation he was a racist.

‘To the extent that he accepted white minority power but was keen to be a junior partner, he was a racist.

‘Thank God he did not succeed in this as we would have been culpable in the horrors of apartheid,’ he told the BBC.

However, Gandhi’s biographer and grandson Rajmohan Gandhi has defended his grandfather for paving ‘the way for the struggle of black rights’.

‘Personally, I am very sad that the statues are being removed because of all the wrong reasons,” Tushar Arun Gandhi, Mahatma Gandhi’s great-grandson, told CGTN Digital.

‘I am also not a big fan of cult statues. If removing statues help the cause they seem to be subscribing to, then absolutely remove them.

‘If Bapu [Gandhi] was here, he would have supported these petitions and said “please remove my statues”.’

The East Leicester MP Claudia Webbe has described the debate over Gandhi as an unecessary distraction from the Black Lives Matter campaign.

The city mayor has written to former Leicester East MP Keith Vaz, who played a role in the creation of the Gandhi statue.

In the letter, Sir Peter wrote: ‘I am delighted to be able to give you an absolute assurance that there is no prospect whatsoever of the council agreeing at any time to the removal of the statue – and certainly not while I remain mayor.’

The Gandhi statue was funded with donations from local people to celebrating the man who led the campaign against British dominance of people in India during the early 20th century.

Gandhi, who was born in Porbandar, India, in 1869, studied law at University College in London and campaigned for equality in South Africa before joining the struggle for Indian independence.

He was killed in 1948 by a Hindu nationalist, Nathuram Godse, who was angry that Gandhi had supported the British plan to divide India along religious lines.

Who was Mahatma Gandhi? The Father of the Nation who led India to independence from Britain

He was named the Father of the Nation after his peaceful struggle to lead India to independence from the British.

Mahatma Gandhi was the architect of a form of non-violent civil disobedience, organising boycotts against British institutions in a tactic that would influence the world.

But less than a year after he was finally able to celebrate independence from Britain in 1947, Gandhi was assassinated by Hindu extremist Nathuram Godse.

He was 78 when he was shot and killed in New Delhi on January 30, 1948 after leading his usual multi-faith prayer group in New Delhi.

Gandhi was born on October 2, 1869,  as Mohandas Karamchand Gandhi at Porbandar in the western Indian state of Gujarat.

In 1883 he was married off by his parents to Kasturba Makanji when the young couple were both aged just 13. They went on to have four children.

Between 1888 and 1891, Gandhi studied law in London before he left to work as a lawyer in South Africa. 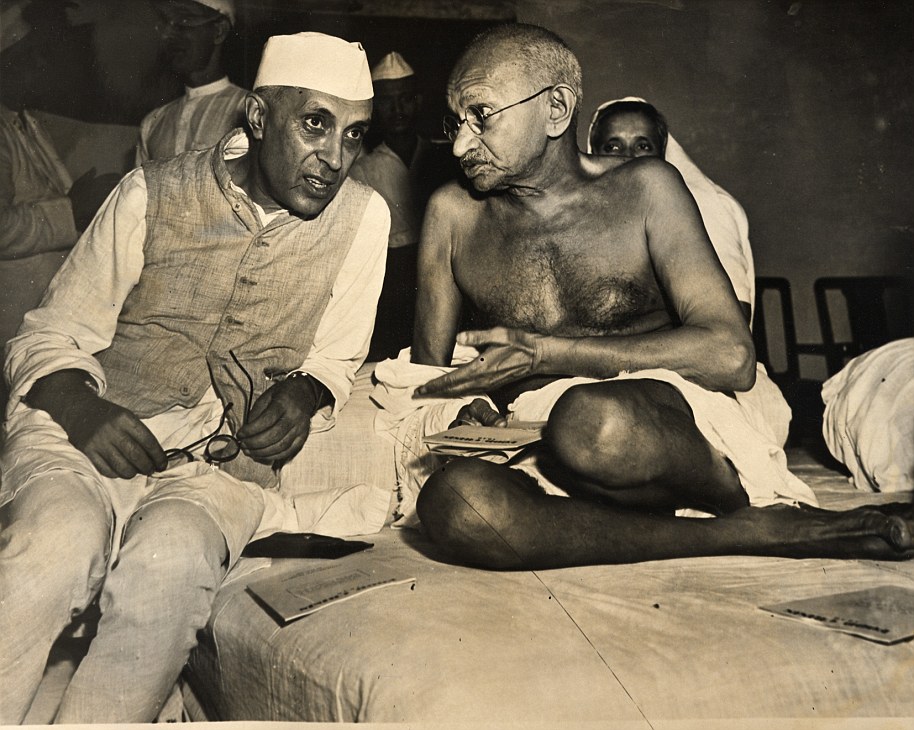 By 1913, he had carried out his first non-violent action in the country –  the Transvaal march, a protest against the ban on Indian immigration.

Over the next decade, having become the main moral authority of the Indian National Congress party, Gandhi would go on to call for civil disobedience against the British colonial power.

It was an action that prompted his arrest for subversion and he was jailed for two years.

After his release, Gandhi led the famous Salt March in 1930, a non-violent protest against the state salt monopoly. The march covered 217 miles from his ashram in Ahmedabad in the northwest to the Indian Ocean before he was arrested with tens of thousands of people.

Two years later, and in jail again, Gandhi went on one of a series of hunger strikes to protest against the segregation of the ‘untouchables’ – the name given to people who fell outside the Indian caste system. 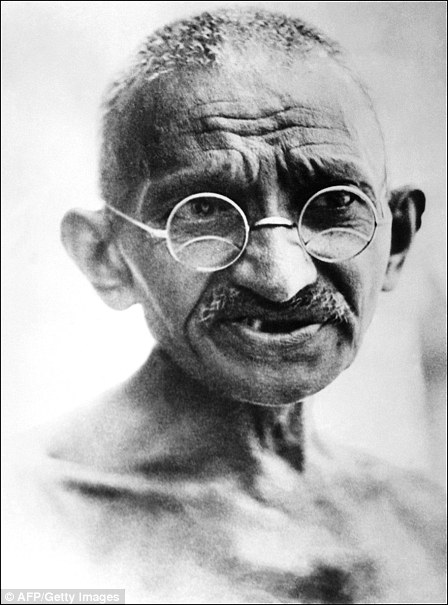 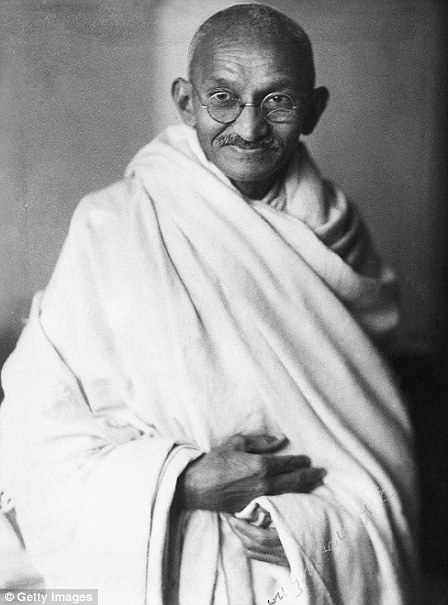 Mahatma Gandhi was the architect of a form of non-violent civil disobedience, organising boycotts against British institutions in a tactic that would influence the world

In 1942, Gandhi delivered his famous Quit India speech in Mumbai, calling for a general strike to force the British to leave – only to be arrested and jailed again until 1944.

However, his dream was realised in 1947 after the declaration of India’s independence.

His struggle for peace did not end there, and he fought in vain against the partition of Hindus and Muslims into two separate states, India and Pakistan.

On January 30, 1948, less than a year after India had been granted independence, he was shot dead after leading his usual multi-faith prayer group in New Delhi.

That day is now observed as Martyrs’ Day in India. It was the sixth attempt on Gandhi’s life and some two million Indians attended his funeral.

The man who shot him, Hindu nationalist Nathuram Vidayak Godse, claimed in court that Gandhi was a fraud, who had failed to stand up for the rights of the persecuted Hindus during the struggle for independence.

Both Godse and an accomplice were sentenced to death by hanging.