A Lego obsessed dad has spent five years and over £70k on building a huge Lego city in his basement.

Josh Foote, 35, from New Jersey, United States, began his project back in 2015 and moved it from his bedroom to his new home with a basement as he continued to expand his Lego city. 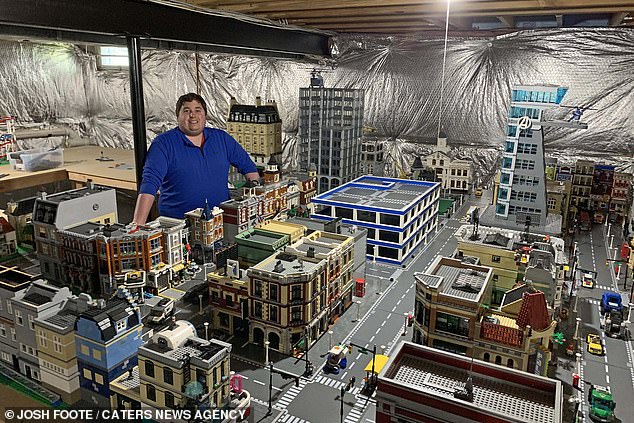 Josh Foote, 35, from New Jersey, United States, began his project back in 2015 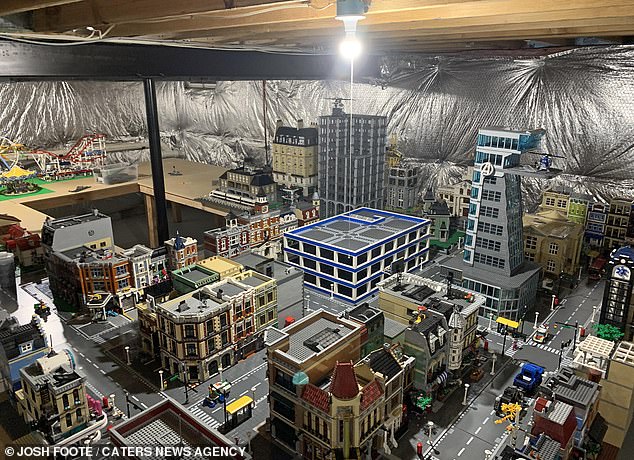 He has since spent over $90,000 collecting and building his Lego city 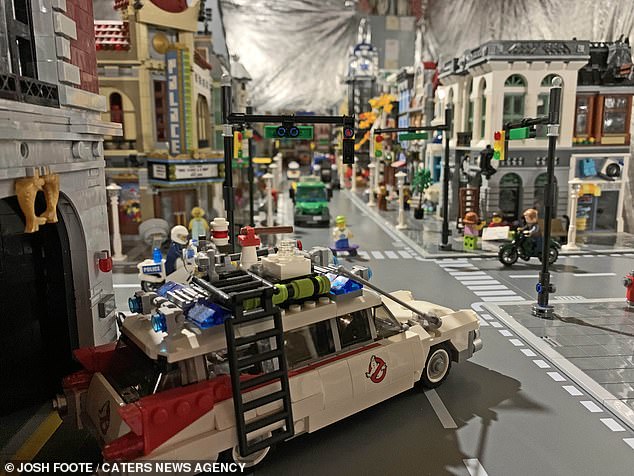 On top of this the custom buildings cost $500 each with the skyscrapers, Avengers Tower and Museum being an additional $1000 each.

Josh now estimates that he has spent over $90,000 on his basement project.

The political consultant said: ‘I initially started my current Lego city around 2015 or so. 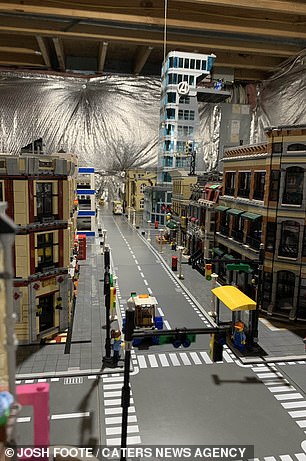 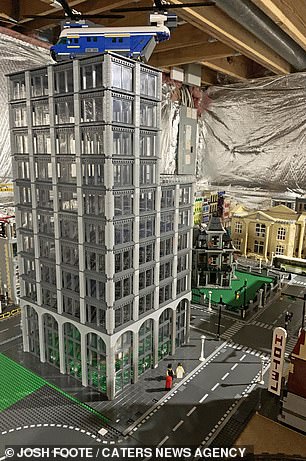 Left: A street in the Lego city just above street level. Right: A Lego skyscraper, one of the taller buildings in the model city 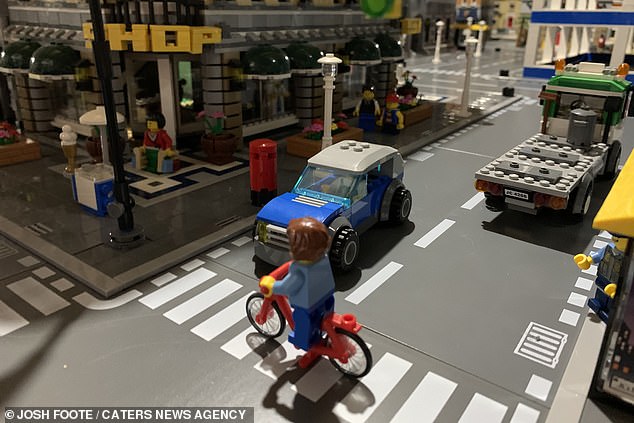 The detail is extraordinary, with all the streets populated with Lego vehicles and characters and models including postboxes, flowers lampposts and ice cream stands

‘Growing up, Lego was one of the toys you could see me always playing with, and I had a makeshift city that you would imagine a young child building in the early 1990’s.

‘Like most kids, I grew away from toys and into sports and other such activities during my high school and college years.

‘In the Lego adult fan community, this time period is commonly referred to as your ‘dark ages.’

‘Fast forward to Christmas of 2012 when my then-girlfriend, now wife, and I were at a Toys R’ Us getting Christmas presents when I saw some of the Marvel Avengers Lego sets.

‘She ended up going back and picking me up one of the smaller sets and I was hooked again! 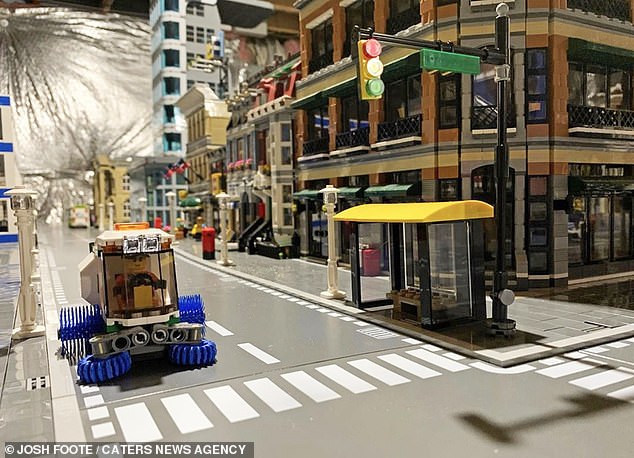 When photos are taken from ‘street’ level, the scale and detail is even more impressive

‘I had to complete the Avengers team, so I bought some more sets, and then I saw that there were Batman Lego sets and it was a slippery slope of buying all the sets that I missed out on.

‘While buying these sets, I came across a Lego Theme titled Lego Creator Expert, which is billed more towards adults with their complexity and prices. These sets serve as the basis for the Lego Modular city.’

Josh says his family never realised how obsessed he’s become with Lego until they witnessed his creation for themselves.

He said: ‘My family never realised how ‘crazy’ it was until they walk down the stairs to my basement and see just how large it is. 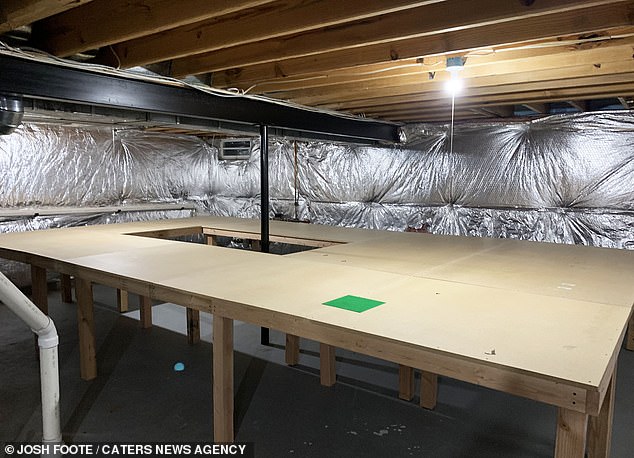 Pictured: The city is built on a large table that takes up 50 per cent of the basement, Josh said 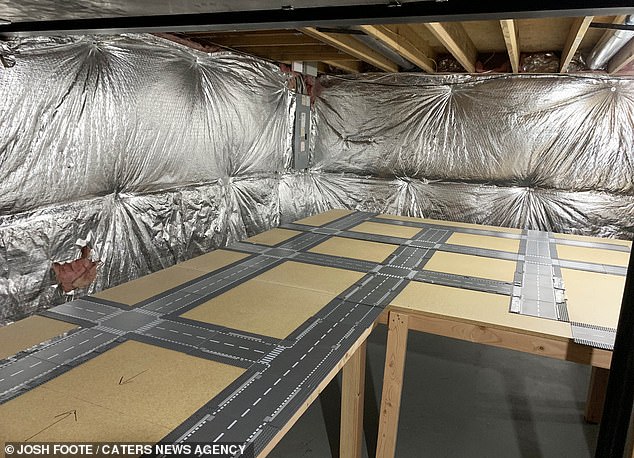 He started by putting the roads down, and built the city up from there after it was mapped out 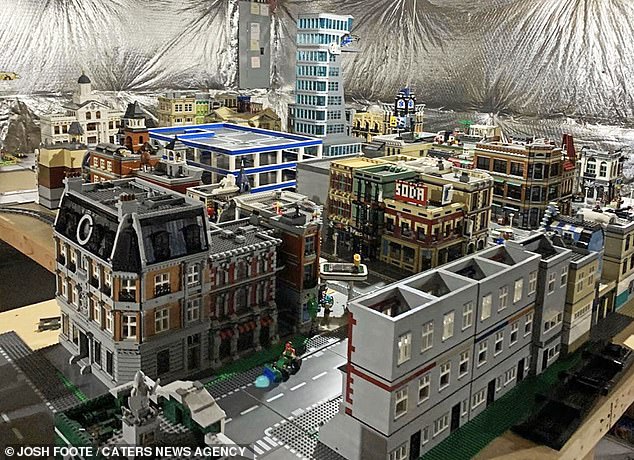 From starting with just the Lego streets, he was able to build up the entire city

‘Overall, everyone likes to see what’s new when they stop at my house. Additionally, it has made the holidays easy for them, as buying me a Lego set is an easy purchase for them.

‘My wife and I have a 7-week old baby, so he hasn’t been roaming freely as of yet.

‘When he gets older, I imagine I will let him play with it under my supervision.’ 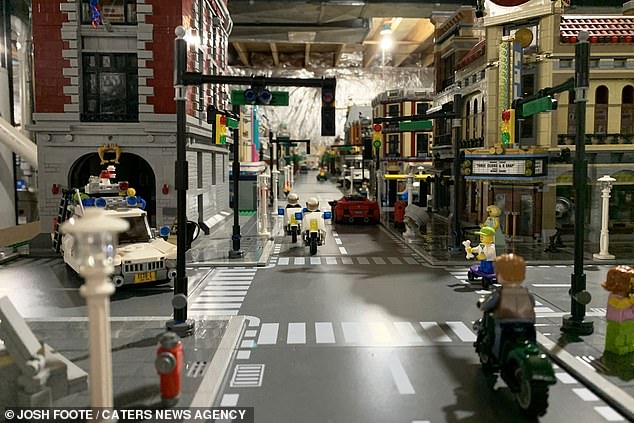 The hand-built city consists of 1600 different sets of Lego with the retail value of $50,000 dollars, with an additional $40,000 worth of extra pieces and custom buildings 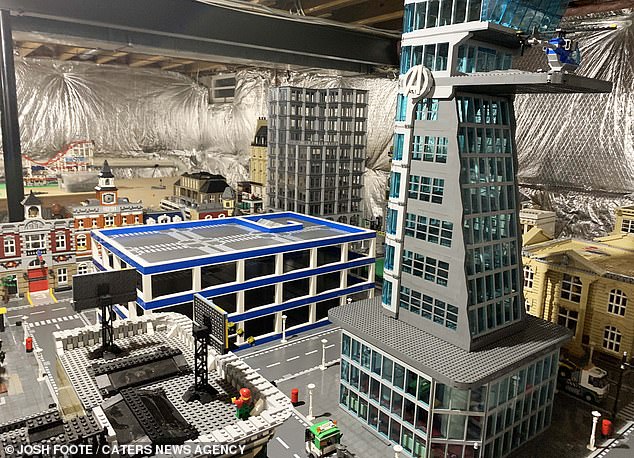 The city, largely made up of buildings you might expect to find in real life, also has the tower from ‘The Avengers’. Josh said it was a ‘slippery slope’ when he started collecting sets he had missed out on

Fans of the ‘LEGO movie’ will likely have already spotted parallels between Josh’s story and the movie, which came out in 2014.

In the LEGO movie, animated Lego characters are brought to life with a combination of CGI and real Lego models, telling the story of a heroic adventure that involves characters spanning from ‘The Lord of the Rings’ to Marvel and DC superheroes.

However, in the third a act of the film, it is revealed – spoiler alert – that the action has been a figment of a boy’s imagination, playing with a Lego city his father has built in the basement of their family home. 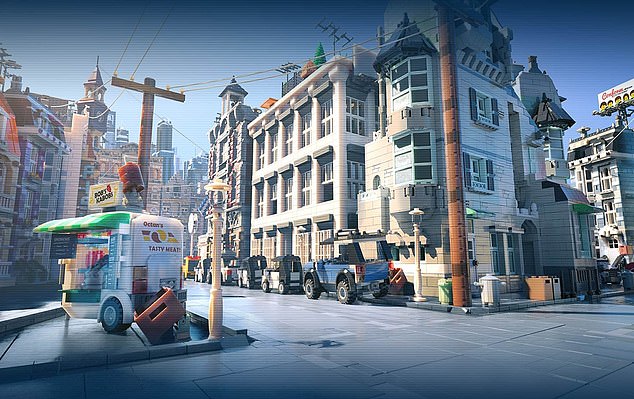 Pictured: The LEGO movie, which combined CGI and real Lego models to film the movie

Two characters from the LEGO movie run through the streets

Pictured: The city in the LEGO movie, with actors Will Ferrell (left) who plays ‘Lord Business’ and his son Finn, played by Jadon Sand

It turns out the villain of the story ‘lord business’ is a metaphor for the boy’s father, who calls the Lego a ‘highly sophisticated interlocking brick system’ that is not to be played with by children.

Despite his son’s protests, pointing out that the Lego was bought at a toy store, the father goes about dismantling the more fantastical models that his son has built.

But in a heartwarming scene which cuts between the imaginary characters facing off in a final showdown, and the son showing his father the fun he has had making new models, the father comes to terms with his son’s more eccentric creations, eventually joining him in playing the Lego city.

Josh’s city looks remarkably similar to that seen in the Lego city, and he will be hoping that his own son can have as much fun with the city when he grows up.

‘Lord Business’ prefers to make realistic models, while his son, Finn, likes to go down the more imaginary route

At first, ‘Lord Business’ is upset to find his son mixing his Lego city with his imaginary creations, but changes his mind when he realises how creative Finn has been